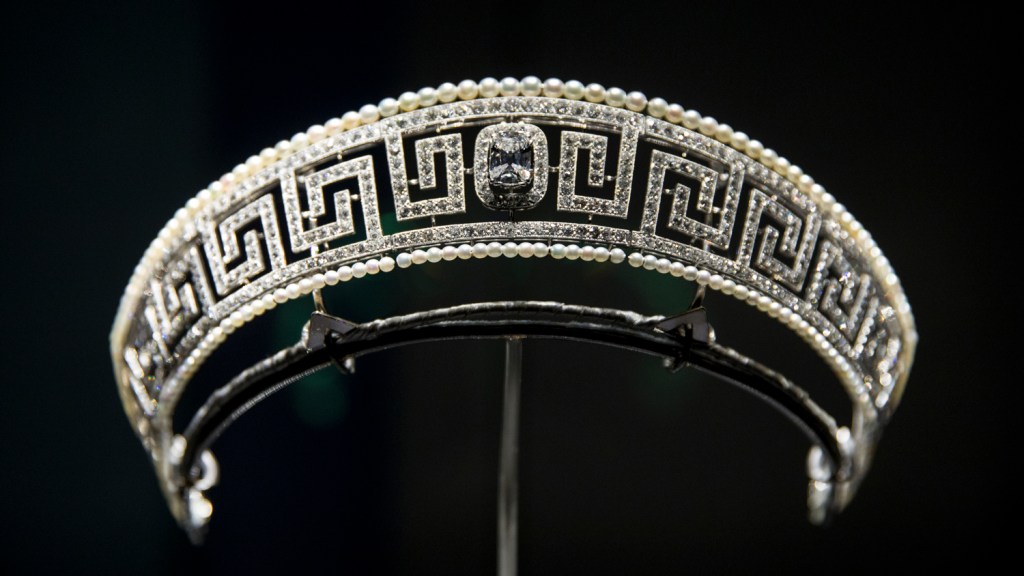 A magnificent Cartier tiara with a tragic history is one of the star displays at a new exhibit examining the golden age of luxury ocean travel at the Victoria and Albert Museum in London.

The diamond and seed-pearl piece was designed in 1909 in the fashionable Greek key style for Lady Marguerite Allan, the wife of Sir Hugh Montagu Allan of the Canadian Allan Line shipping company.

In 1915, Lady Allan was traveling from New York to Liverpool with two of her young daughters, Anna and Gwendolyn, and two maids, Emily Davies and Annie Walker, in order to organize and open a hospital for injured Canadian servicemen in England.

She was onboard the Lusitania, one of the fastest and largest ships on the ocean, fitted out as luxuriously as any English country house. Despite World War I having broken out in Europe the year before, civilian ships were still allowed to sail between Britain and America in the gentlemanly belief that they would be safe from attack.

Even when the Germans declared on February 4, 1915, that the waters surrounding Britain were a war zone and that allied ships entering British waters risked attack from U-boats without prior warning, the Lusitania was still allowed to sail as it was believed that with a speed of 21 knots, it could outrun any attack.

Tragically, this proved not to be the case. With Ireland in sight on May 7, the ship was attacked by German torpedoes and sank in just 18 minutes. Lady Allan’s daughters were among the 1,198 lost.

Lady Allan was injured herself but escaped with her maids and a suite of luggage that contained the Cartier tiara. The tragedy did not end there. The Allans’ only son was killed on his first day of service in 1917, and Lady Allan would go on to outlive her last remaining daughter by 15 years. She died in 1957.

In 2015, the tiara was auctioned at Sotheby’s, fetching half a million pounds, and it now forms part of the Cartier collection. Together with posters, fashions, and interiors from the Titanic and other luxury ships, it will be on display as part of Ocean Liners: Speed and Style at the Victoria and Albert Museum until June 17.