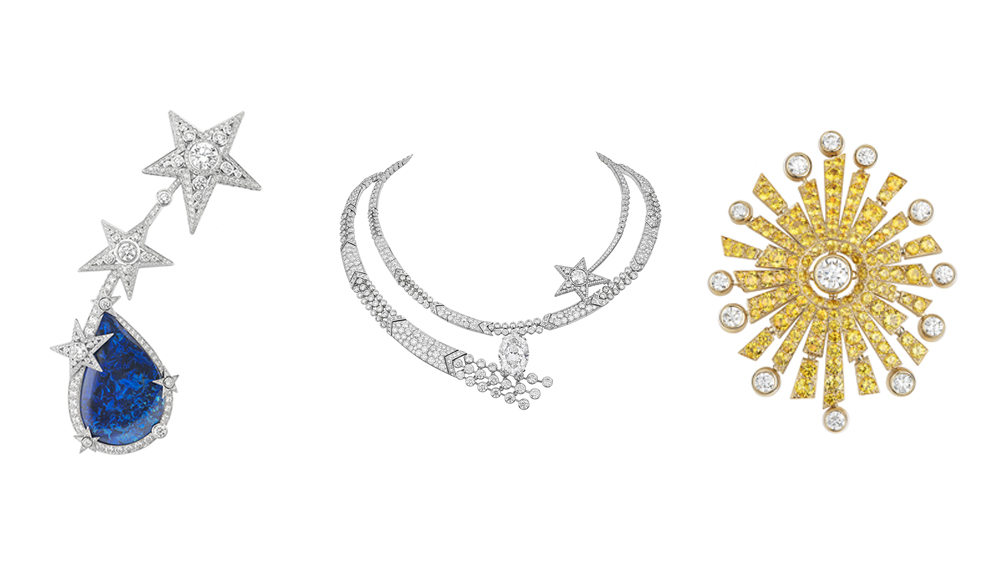 Revisiting the archives is a perennial exercise at Chanel, where strong—and seemingly eternal—design codes such as tweed jackets and quilted handbags are reinvented for generation after generation. But this year, its rearview mirror was turned toward a less well-worn piece of history: Gabrielle “Coco” Chanel’s first foray into high jewelry, in 1932. Celestial pieces including a collar necklace of shooting stars traversing the neck in a trail of diamonds, a diamond ring encircled by a swirl of satellite stones and a yellow-diamond sunburst brooch are just a few of the highlights; all mimic Chanel’s original array of jewels, which made their debut 90 years ago.

The French house was solicited by the London Diamond Corporation to create the jewelry, dubbed Bijoux de Diamants, to promote the diamond industry during the Great Depression. It had the desired effect. Janet Flanner, an American expatriate writing dispatches for The New Yorker from Paris that year, wrote of its influence: “It is perhaps of interest to add that two days after the Chanel Paris diamond show opened, De Beers stock was reported to have jumped some twenty points on the London [Stock Exchange].”

“Before 1932 there was no collection in jewelry, only pieces created separately for special orders designed from a special stone, but never a full collection,” says Patrice Leguéreau, director of Chanel’s Fine Jewelry Creation Studio. However, no archival sketches remain and the only known piece still in existence is a diamond star brooch that belongs to the maison. “We found a movie about 10 years ago where we can see all of the collection,” says Leguéreau, who notes that the film, which is the only surviving visual evidence of the collection besides five photos in a press book, was the impetus for his idea to re-create the pieces.

Based on Flanner’s recollection, the new jewels are close to the originals. She describes a necklace as “a superb comet whose nape-encircling tail is all that attaches to a lady’s throat,” bracelets fashioned like “flexible rays” and, like the brooch mentioned above, a unique piece designed as a “splendid sun of yellow diamonds from a unique collection of matched stones unmatched in the world.” Proof that even the most elusive pieces from Chanel’s trailblazing past can still illuminate the present.