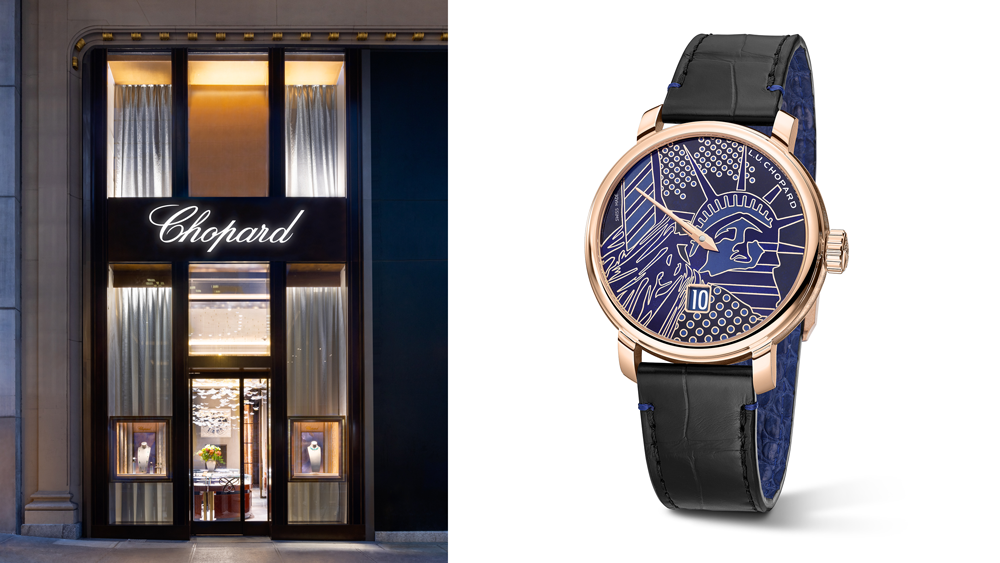 Chopard is closing out the end of the year with a big move from its 15-year-old Madison Avenue flagship to new digs on Fifth Avenue. The new flagship boutique, which opens its doors today, is located at 730 Fifth Avenue between 56th and 57th streets in New York City in the Big Apple’s famous Art Deco-Era Crown Building, which was designed by architects Warren and Wetmore, who also designed the city’s Grand Central Terminal.

“We knew that our lease was coming to an end on Madison Avenue and we knew that we didn’t necessarily want to stay there because we witnessed the change on Madison over the past 15 years with less regular traffic and really not quite enough people,” Karl-Friedrich Scheufele, co-president of Chopard, told Robb Report. “We knew that we wanted to finally go to Fifth Avenue. We had this rather surprising opportunity that came up right around Covid and it was a bit of a leap of faith decision.”

Nestled next to Mikimoto and Bulgari and just a minute away from Bergdorf Goodman, the new boutique will certainly catch the eye of luxury clientele. Walking into the space, guests will cross dark gray- and white-veined Flor di Bosco Italian marble floors and pass under an impressively high ceiling adorned with cascading white magnolia leaves (365 to be exact, to represent the days in a year) made of Murano glass by Venini that appear to hover just above the glass vitrines. The magnolia leaves motif, Scheufele’s idea, also extends to four openings on the walls, which are executed in four colors to represent the four seasons. The decorative element is meant to be a nod to the magnolia trees in nearby Central Park. (The walls will also be a canvas for rotating displays of contemporary art.) Brass details echo the decor on the arches on the entrance of the building while plush royal purple velvet chairs work in harmony with amethyst crystal objets.

But the real draw, of course, is what’s in the window displays and behind the glass inside the store. A not-to-miss highlight is the fancy vivid-yellow diamond necklace weighing more than 100 carats. You can imagine that a number of our stores are asking to exhibit it,” says Scheufele before adding that it will likely remain on display in New York for the month… unless, of course, it sells. Somewhat more attainable but also one-of-a-kind is a special L.U.C. Quattro Spirit 25th Avenue Edition, an enamel-dial watch that depicts the Statue of Liberty rendered via delicate metal threads. “It’s a first for us and it was only finished just 10 days ago,” says Scheufele.

He also adds that the new Alpine Eagle models, including the all-yellow-gold model will debut in New York, where it will have priority before being introduced to other boutiques, but will be available only in the boutiques. “Yellow gold is just really a metal I believe in,” says Scheufele. “I strongly believe it’s coming back.” We tend to agree.

To herald the store opening, last night a ribbon-cutting ceremony as high-wattage as Chopard’s jewels was held with Karl-Friederich Scheufele and his sister and co-president, Caroline Scheufele, holding court with a coterie of celebrities including Liev Schrieber, Uma Thurman, Katie Holmes, Maye Musk and Pete Davidson. It’s a reminder that Chopard will forever be tied to the glitz and the glamour of the red carpet and now, with its new home in Manhattan, it has renewed its ties to the bright lights of the Big Apple.