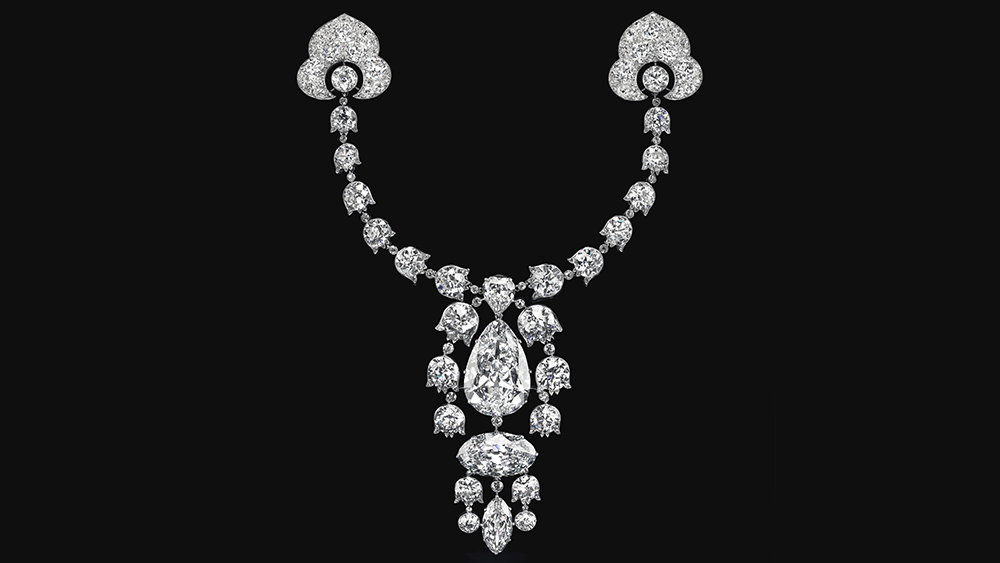 The top lot at the Maharajas & Mughal auction: the A Belle Époque Devant-de-corsage

The dust has settled, and the results are in: Christie’s Maharajas & Mughal Magnificence collection achieved a whopping $109.2 million at auction. Crunch those numbers and you’ll come out with three new records for Indian works of art, as well as the second highest auction total for a private jewelry collection.

The outcome comes as no surprise. Much buzz has surrounded this sale since its announcement in April, with many even expecting it to unseat the current reigning record holder for a private jewelry collection: the 2011 sale of the Collection of Elizabeth Taylor, which realized nearly $116 million. The Maharajas & Mughal collection fell just short of that margin, but its jaw-dropping gems still garnered a twelve-hour marathon auction, with bidders from 45 countries represented.

Plucked from the Al Thani Collection of the royal family of Qatar, the Maharajas & Mughal Magnificence pieces range from ornate, 17th-century daggers to 20th-century jewels. “[It’s] a significant cultural moment for Indian and Islamic art,” said William Robinson, Christie’s international head of world art, in a statement. “We are delighted with the strong results, which showcase the global appetite for masterpiece-quality works.”

All told, 29 lots sold for over $1 million, but the top sale was the A Belle Époque Devant-de-corsage, a delicate Cartier pendant glistening with pear- and oval-cut diamonds, which realized $10.6 million. The second-highest was the Mirror of Paradise, a 52.58-carat diamond ring. And while the “mirror” may not be completely reflective, its sought-after clarity fetched $6.5 million regardless.

Another noteworthy moment was the sale of a 17th-century jade and gold dagger previously owned by emperor Shah Jahan for $3.3 million. In addition to building the Taj Mahal, the late Mughal ruler also had quite the flair for exquisite steel: The meticulously carved visage of what scholars believe to be a European man graces the hilt, and calligraphic, nasta’liq script circles the base of the blade.

If you missed out on the auction and preview, the Al Thani Collection runs still deeper than the 400 treasures exchanged at Christie’s—others will go on display next spring at the Hôtel de la Marine in Paris. It might be worth catching a glimpse, in case these, too, soon make their way to the auction block.