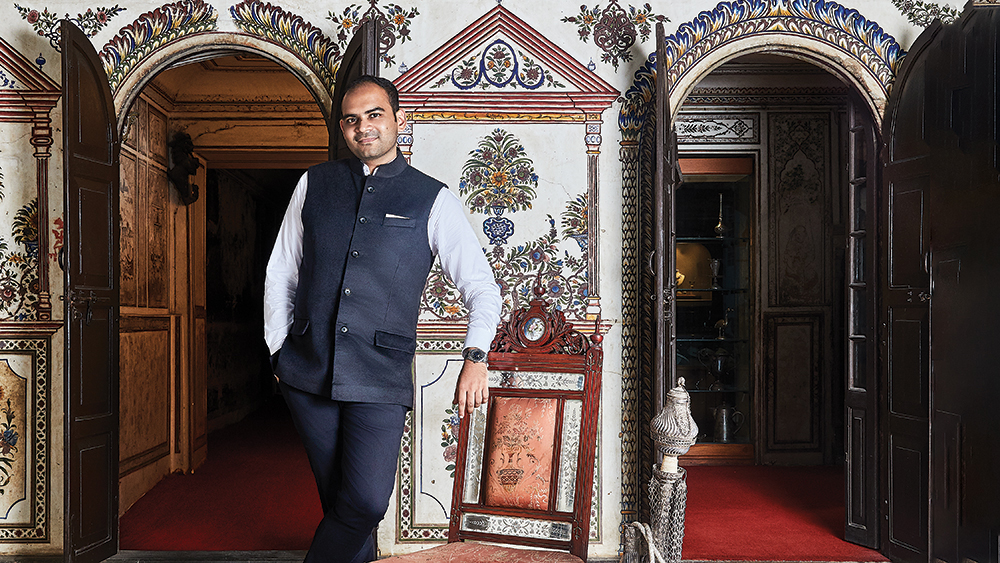 Jeweler Krishna Choudhary pulls out a box from his safe and then slowly opens the velvet case to reveal a mesmerizing 150-carat sky-blue star sapphire. The stone fits snuggly in the palm of my hand, and looking at it is akin to gazing into a pool of water. But, alas, it isn’t for sale.

“Sometimes, it’s in our destiny just to see something beautiful and not own it,” says the soft-spoken Choudhary, whose private jewelry salon is tucked away in London’s Mayfair neighborhood. According to Hindu beliefs, simply holding a sapphire (which represents the most powerful planet in the galaxy, Saturn) can bring good karma to some, while it can have the reverse effect on those unlucky enough to have the wrong astrological sign.

Imbuing gemstones with energy and healing powers related to the planets and deities, Hindu cosmology has helped define a culture that values jewelry as far more than adornment. “Every stone is a responsibility because they are passed down for generations and represent meaning,” says Choudhary, who is from one of Jaipur’s noble families. For more than a century, as jewelers to the royal families of India, the Choudharys have collected important gems and jewelry. Some of their stones are 200 to 300 years old, and many may never be sold or recut because his father has chosen to preserve them “to keep their stories,” Choudhary says. Only recently did his father allow him to use some of these coveted gems for his first jewelry collection, named Santi, which debuted earlier this year in his freshly minted salon.

Choudhary is among a small set of contemporary Indian jewelers gaining notice from peers and collectors alike for fusing Eastern and Western aesthetics. Along with Viren Bhagat and Bina Goenka, Choudhary is influencing the direction of haute jewelry much the same way Jacques Cartier did in the early 20th century after repeated trips to India, where he became enchanted by the colorful gems and what he viewed as an exotic visual culture. Cartier forged relationships with wealthy maharajas who frequently visited Paris with boxes of gems in tow, and who then bestowed commissions on him and other French jewelers for elaborate designs—to be worn largely by men. The Indian aesthetic inspired these great European jewelry houses for decades to come, and the 1920s and ’30s became known as a Golden Age for Indian jewelry’s influence.

The Maharaja of Patiala in Cartier necklaces.  Bridgeman Images

Some of these historic Cartier pieces were recently on the block in Christie’s much-hyped Maharajas & Mughal Magnificence auction in June in New York. Spanning 500 years, the 400 pieces of Indian jewelry and objects on offer came from the Al Thani collection, and the sale realized $109 million, a record for an auction of Indian art or Mughal objects. The lots illustrated the breadth of Indian jewelry, from a minimalist but nonetheless grand Golconda-diamond rivière necklace that once belonged to Nizam of Hyderabad, which sold for $2.4 million, to a bohemian-style Cartier spinel, pearl, diamond and emerald necklace that fetched $1.9 million.

“The sale demonstrated how jewelry was a part of everyday life in India and worn as simply as clothing,” says Rahul Kadakia, Christie’s international head of jewelry. “The Indians had and still have today a love, appreciation and respect for jewelry like no other culture.” The range of designs also brought to light an Indian aesthetic that resonates now: a bold expression that is made subtler with the use of unfaceted cabochon stones and flat diamonds, gemstone beads and pearls. Among the highlights of the sale were three pieces from Bhagat, perhaps India’s most coveted high-end jeweler today. For more than 20 years, Mumbai-based Bhagat has gracefully combined the Indian essence with a streamlined Art Deco style to produce distinctly feminine, stylish pieces with important, rare stones.

“Bhagat has raised the profile of Indian contemporary jewelry,” says Kadakia. “Viren was able to find his style and make his mark, and you can instantly recognize his pieces. That is what we look for in a collection.”

Indian jewelry is often associated with heavy gold settings and slightly chunky, oversize silhouettes, but contemporary designers are featuring antique Indian stones (such as carved or cabochon-cut rubies, emeralds and sapphires, rare Golconda diamonds and natural pearls) in streamlined settings bearing a flourish of cultural references through paisley or floral motifs. Designer Hanut Singh, who divides his time between Delhi and New York, likes to riff on traditional techniques, using enamel “as a lick of paint” on large playful earrings and featuring centuries-old stones, such as carved Colombian emeralds, in modern pieces. He describes Indian designs as “voluptuous, sexy, bold with movement and artistry.”

“You have access to great stones in India because the Indians have collected them for generations,” says Singh, who comes from a family of maharajas and maharanis. “My great-grandfather was the first to start taking loose stones and jewelry to Cartier, Boucheron and Chaumet to be remade.” He says jewelry was always a big part of his family life, and stones were passed down from one generation to the next. He often wears his grandfather’s diamond in a custom-made pinkie ring.

Mumbai-based designer Bina Goenka, who opened a London salon two years ago, juxtaposes Indian motifs with contemporary techniques in her pieces, such as long ruby earrings set in red rhodium gold and enamel. The effect is one of subdued elegance. “The jewelry I create needs to speak to the opulence of Indian work, but it also needs to make sense within the contemporary age, when jewelry is created to be worn and not to be left in a safe,” says Goenka.

Choudhary turns to his family’s cache of stones for inspiration, particularly the Indian flat-cut diamonds, which are without the typical sparkle and can be confusing to Westerners who expect to see the stones faceted. “A flat diamond is like a painting,” he says. “You don’t value a painting for the sum of its parts, the canvas and color, and that’s similar to a flat diamond. You don’t value the flat diamond for carat weight; it is about the beauty of the stone.” New stones also have a place in his designs, such as the sleek emerald-cut diamond that is flanked by two antique leaf-carved Colombian emeralds in a ring fusing ancient and modern elements.

Now Choudhary is educating a new generation of Moguls: tech giants in Silicon Valley, where he’s cultivated a clientele who have a curiosity about India’s design heritage and historic stones. “They won’t wear a diamond just to show off a diamond,” explains Choudhary. “They want something with a sense of design, an aesthetic and history, and they look for something with meaning.” Still, even the biggest tech giants won’t be able to get their hands on his family’s prized star sapphire.