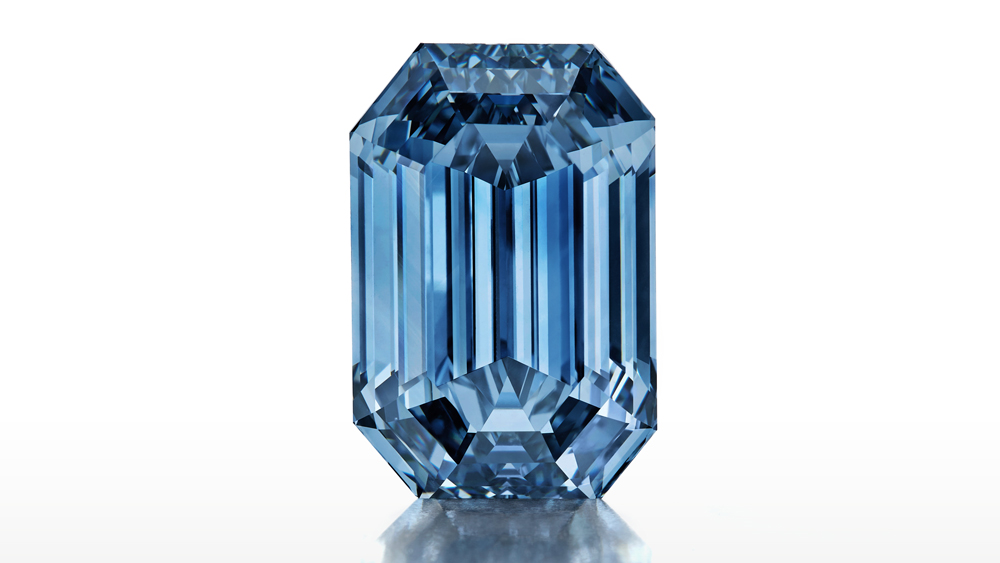 When the De Beers Cullinan Blue, a 15.10-carat step-cut fancy vivid blue diamond, goes on the block at Sotheby’s Hong Kong at the end of April, it will carry an estimated price tag of $48 million, the highest dollar amount ever placed on a blue diamond at auction.

“Before we get into comparisons with other stones, one important point to mention is that this estimate puts the stone alongside some of the greatest, finest works by the titans of art history, such as the Botticelli that we sold in January for $45 million, and other great works by Monet, Picasso, Richter, Warhol,” Wenhao Yu, the Hong Kong-based chairman of jewelry and watches for Sotheby’s Asia, tells Robb Report.

Art credentials aside, let’s not forget that the De Beers Cullinan Blue is the largest vivid blue diamond to ever appear at auction. And when compared with recent sales of vivid blues—including the 14.62-carat Oppenheimer Blue, which sold for $57.5 million, or $3.9 million per carat, at Christie’s Geneva in May 2016, or the 12.03-carat Blue Moon of Josephine, which sold for $48.5 million, or about $4 million per carat, at Sotheby’s Geneva in November 2015—“the potential price per carat here is pretty attractive, relatively speaking,” Yu adds.

Below, we share five surprising details about the diamond, the single-lot sale where it will be offered and the market for fancy vivid blues, which owe their sea-and-sky hues to trace amounts of the rare element boron.

Discovered at South Africa’s Cullinan Mine in 2021, the blue diamond is taking an extremely short route to market. When it is sold at a standalone, single-lot auction tentatively scheduled for April 27, it will have made just two pitstops along the way: at Diacore, a De Beers partner whose master cutters cut and polished the gem, and at the Gemological Institute of America, where it was found to be the largest internally flawless step-cut vivid blue diamond its lab had ever graded.

“Given the continued and escalating interest in colored diamonds driven by increasingly limited supplies, the consignors felt that this spring would be the best time to introduce this stone to the market, with the auction format offering the best opportunity for the diamond to be seen by the widest possible pool of potential buyers,” Yu says.

Sotheby’s has a track record of selling multimillion-dollar blues.

When it comes to selling fancy vivid blue diamonds, Sotheby’s has the edge. While Christie’s holds the current record for the sale of a vivid blue thanks to the $57.5 million it achieved for the Oppenheimer Blue, Sotheby’s has realized four of the past five highest prices for these rarefied treasures.

The house embarked on its lucky blue streak in 2007, when Sotheby’s Hong Kong sold a 6.04-carat, internally flawless emerald-cut fancy vivid blue diamond for a record price of $1,321,495 per carat, establishing a new $1 million-per-carat market minimum for all sizable fancy vivid blues.

Since then, prices have only traveled in a single direction (up!). Recent milestones include a Sotheby’s New York sale in 2014, when the Mellon Blue Diamond, renamed the Zoé Diamond, sold for $32.6 million ($3.35 million per carat), and the 2015 sale of the Blue Moon of Josephine, which set the price-per-carat auction record for any diamond or gemstone.

Sotheby’s choice of Hong Kong as the platform for selling the Cullinan Blue was anything but arbitrary. In 2020, collectors from Asia “acquired more than 40 percent of the value of all global watches sales and 41 percent of the value of all jewelry sales,” Yu says. “Most recently in July 2021, Sotheby’s Hong Kong set the highest price achieved for any jewelry or gemstone purchased with cryptocurrency. The 101.38-carat pear-shaped D Flawless sold for $12.3 million to an anonymous private collector in a single-lot auction.”

And while Hong Kong’s reputation as an international marketplace for both live and online auctions remains intact, buyers from Greater China dominate, accounting for more than 70 percent of Sotheby’s Hong Kong auction sales in 2021, according to Yu.

The pandemic has only underscored the strength of the market for important diamonds.

Over the past two years, investors looking for hard assets have lifted the diamond market to never-before-seen heights. “In 2021, Hong Kong sales were all led by diamond pieces, particularly colored diamonds which continue to see strong demand,” Yu says.

Take, for example, the October 2020 sale in Hong Kong of a 102.39-carat D color flawless oval diamond, which brought $15.7 million in an unprecedented single-lot live sale with no reserve. Or the November 2020 sale of the Spirit of the Rose, a 14.83-carat fancy vivid purple-pink internally flawless diamond, at Sotheby’s Geneva for $26.6 million, a world auction record for a purple-pink diamond. Or the 5.04-carat heart-shaped fancy vivid blue diamond ring that sold for $10.6 million at Sotheby’s Hong Kong in July 2020. To borrow a term from the real estate market, the comparables couldn’t be better!

The public fascination with blue diamonds is fully justified.

If most notable diamonds could talk, they would speak of past lives—long, winding geological journeys followed, in many cases, by memorable stints in the company of humans (consider the cursed saga of the Hope Diamond, for starters). In the case of the De Beers Cullinan Blue, its billion-years-in-the-making tale is virtually unknowable. But that fact does nothing to diminish the wonder surrounding the diamond: how it was formed and discovered, the super-terrestrial forces it experienced on its trip to the surface, and, most curiously, with whom it might live out its destiny.