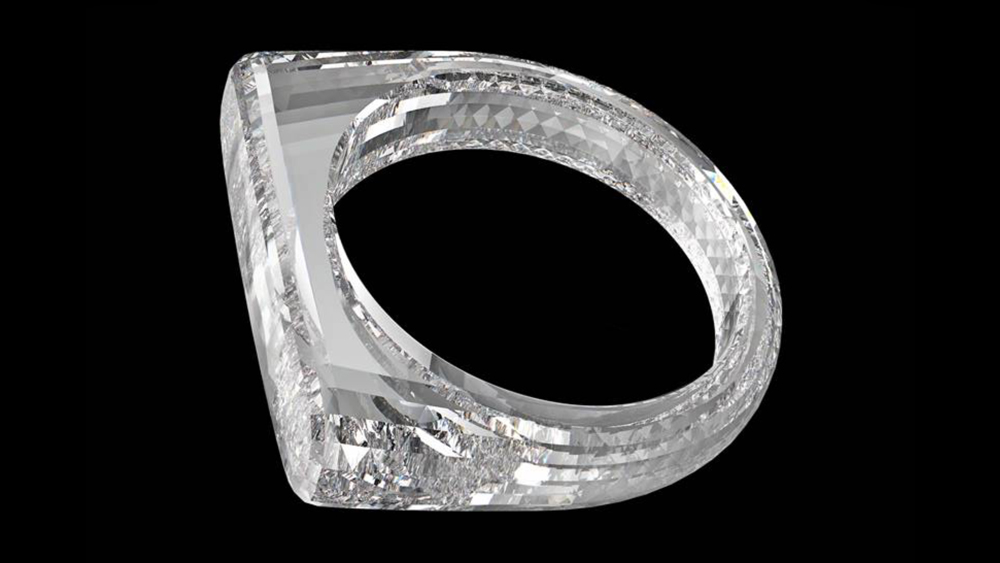 There are diamond rings, and then there are rings made of diamond. The (Red) Diamond Ring—created in collaboration with Apple’s Chief Design Officer Sir Jony Ive, award-winning industrial designer Marc Newsom, and Diamond Foundry—falls into the latter category. Or, we should say, it will fall into the latter. The solid-diamond ring will only be made after it finds a buyer at Sotheby’s third (Red) Auction in Miami on December 5, with proceeds going to the fight against AIDs.

“It is not a precious stone in a metal setting mounted on a metal band,” explains Ive, “it is truly a diamond ring.”

But a ring that requires no metal support whatsoever instead requires a rough diamond big—and pure—enough for an entire bauble to be carved out of it. So instead of embarking on what would have been a doomed search mission for a gem of this size and quality, Ive and Newsom tapped the experts at Diamond Foundry to create one. The San Francisco-based company is America’s leading producer of lab-grown diamonds, and aims to move away from the current diamond mining model (it counts Blood Diamond star and eco-conscious businessman Leonardo DiCaprio among its primary investors). “Creating a rough diamond of this size was something that we have been discussing for a while, and when the (RED) collaboration came together it was the perfect time for us to take on this challenge” says Diamond Foundry founder Martin Roscheinsen.

He explains that, “the key was to grow a rough [diamond] that was approximately 45 carats so that we could create a solid diamond ring out of it.” And his team, using proprietary solar technology, pulled it off. At 45 carats, it is by far one of the world’s largest lab-grown diamonds—the largest to date clocks in at 155 carats, though it was developed to be jewelry quality (for comparison’s sake, the largest diamond ever unearthed is a whopping 1,109 carats).

Once the (RED) ring finds a buyer, the rough diamond created in Diamond Foundry’s Bay Area labs will be shipped over to fourth-generation master cutters in Antwerp to be custom-shaped to its new owner’s finger. To pull off Ive and Newsom’s design, which features thousands of nearly microscopic facets, these cutters have created custom tools—including an apparatus that will cast a laser beam through a micrometer thick water jet to create the cylindrical cut of the inside of the ring. When it is complete, the ring will feature a record-shattering 2,000 to 3,000 facets—making it a one-of-a-kind treasure for more reasons than one.