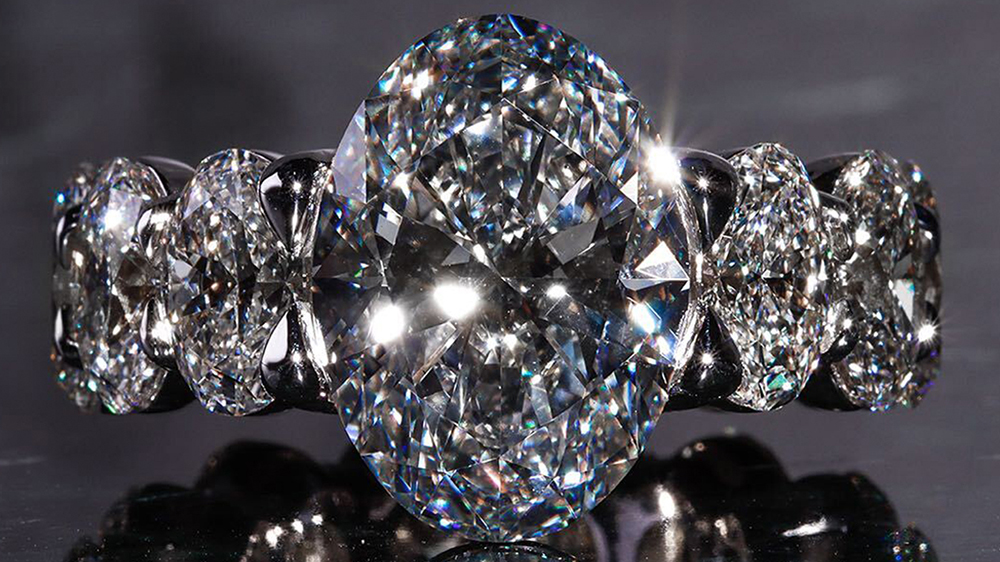 Drake’s newest ring is one we wouldn’t mind kissing.

Champagne Papi’s 18-karat white-gold ring is instead fitted with a collection of 12 dazzling VVS (very, very slightly included) oval diamonds that surround one giant stone at the center. Moss, who was personally commissioned by Drizzy, had to create the one-off within an extremely short timeframe and said that “there was no room for error.” Apparently, the name is a nod to the Godfather’s size and commanding presence.

The one-off is fitted with 13 diamonds, no less.  Alex Moss New York

Like Coppola’s movie, the ring is part of a trilogy. Moss also handcrafted a fully iced necklace and bracelet for the “Hotline Bling” singer in his Fifth Avenue workshop. Of course, the set coordinates perfectly with Drake’s signature diamond studs.

“Creating elegance with this set was the goal, using the finest material at the highest level of craftsmanship,” Moss told Robb Report via email.

They’re not the only accessories Moss has made Drake, either. The jeweler previously forged the rapper’s Lucky Number 11 Ring. The diamond-covered piece sports an owl motif that has become synonymous with Drake’s fashion label OVO (October’s Very Own). The ring is also rumored to be a reference to the musician’s son; Adonis Graham was born on October 11.

Beyond Canadian rap royalty, Moss and his eponymous studio appear to have quite the A-list clientele. The glitzy pieces in the jeweler’s gallery have various high-profile names attached, from Tyler, the Creator to Jack Harlow to Bella Thorne. Each design seems to have the same more-is-more aesthetic for the celebs who like to show off.

Drake is certainly no wallflower when it comes to fashion. He has previously rocked an emerald-encrusted Patek Philippe Nautilus designed by the late Virgil Abloh as well as a Rolex Day-Date with a turquoise dial and a sparkling bezel set with 32 diamonds.

Perhaps precious gems are the one thing Drake can’t refuse.