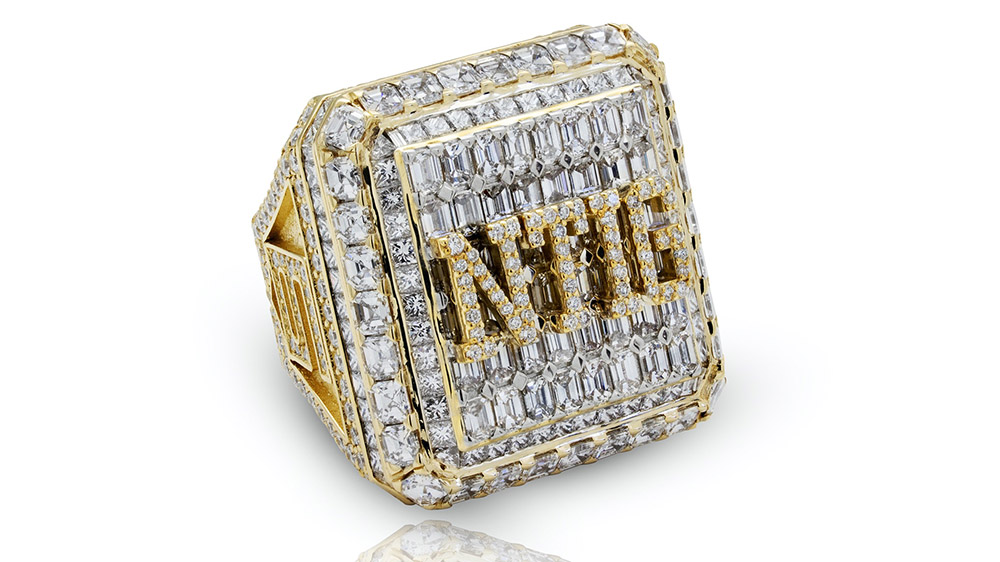 To Drake, any championship is worthy of celebration.

That’s why Canada’s favorite son gifted every player on his rec league basketball team an over-the-top diamond-studded ring to celebrate last year’s championship. And because this is Drake, the rings were designed by Jason of Beverly Hills, the NBA’s go-to jeweler for championship hardware.

It’s unlikely you’ve ever seen a rec league trophy like the one the rapper gave to each of his Sanctuary Basketball League teammates. Each player’s hand-crafted ring features a solid gold base and is adorned with 20 carats flawless diamonds, according to the jeweler. The top of the ring features the name of Drake’s team, NTIG, while the side features each baller’s number. The three-on-three SBL, which describes itself as “A Poor Man’s NBA,” plays all of its games on the professional-grade court located on the grounds of the “Trophies” emcee’s outlandish Toronto mansion.

A post shared by JASON OF BEVERLY HILLS (@jasonofbeverlyhills)

It should come as no surprise that Drake would turn to Jason of Beverly Hills for the rings. The jeweler has become the designer the NBA’s most glamorous teams seek out after winning the sport’s biggest prize. Since 2009, the it has made rings for six championship squads, including the Los Angeles Lakers in 2009, 2010 and 2020 and the Golden State Warriors in 2015, 2017 and 2018. Last year’s championship ring featured a stunning 804 stones, including 15.50 carats of white and yellow diamonds and another .95 carats of Laker Purple amethyst stones.

“Drake had a clear vision of what he wanted and we worked really well together to make that happen,” Jason Arasheben, CEO Jason of Beverly Hills, said in a statement. “I enjoy the challenge of telling the story of the season and incorporating everything into the design and onto a ring, while still using as many diamonds as possible”

This is actually the second championship ring Drake has commissioned from Arasheben. In 2019, the rapper, who is also a global ambassador for the Toronto Raptors, had Jason of Beverly Hills make him a $150,000 ring following the team’s shock NBA Finals victory that June (Baron Championship Rings crafted the official ring). Since Drake was actually on the court for this ring, we have a feeling he might find it to be even sweeter.