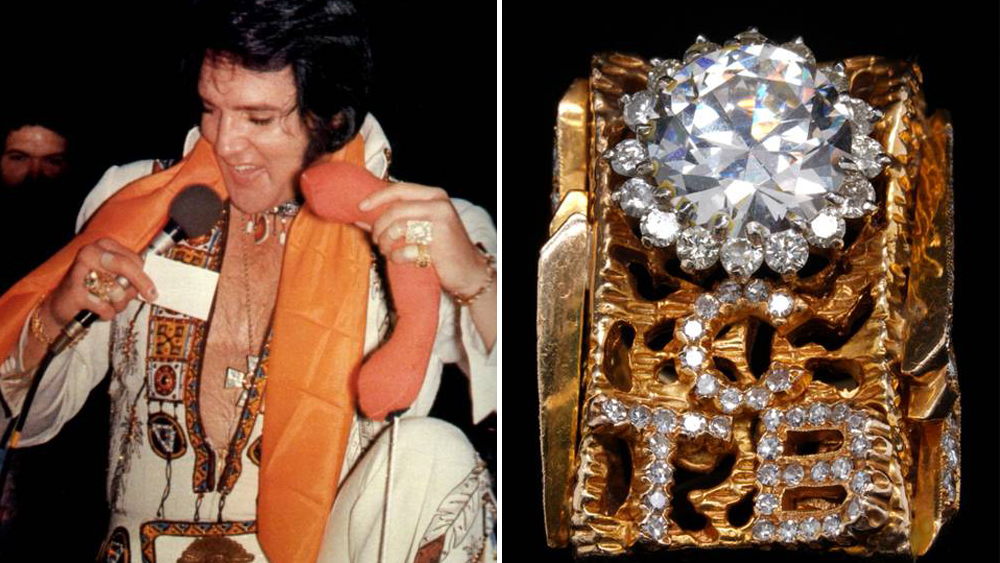 It’s a well-known fact that the King loved bling. The late rock and roll great, more formally known as Elvis Presley, amassed a comprehensive collection over the course of his life, and now a large chunk of it is heading to auction.

The prized pieces, which the “Hound Dog” singer gave to his manager Colonel Tom Parker, will go under the gavel at a dedicated GWS Auctions sale on August 27. Titled the “Lost Jewelry Collection of Elvis Presley and Colonel Tom Parker,” it comprises a total of 193 lots that run the gamut from gold rings and cuff links to watches and chains.

A clear outlier is the solid 14-karat yellow-gold TCB ring (minimum bid: $500,000) that was personally owned and designed by the King. It features the letters “TCB” and two large lighting bolts encrusted with diamonds, along with a large stone in the center. TCB stands for “taking care of business,” which was a favorite expression of Presley’s. This was the first of many TCB rings that star had made with the now-famous motif.

Presley’s Jetstar Jet that he bought for his father.  Kruse GWS Auctions

It’s not just jewelry, either. The sale includes Presley’s personal Jetstar jet (minimum bid: $100,000), his 1976 Harley Davidson (minimum bid: $100,000) and 1973 Lincoln Continental (minimum bid: $50,000). It also features pages of his renowned lyrics and a guitar he played during his famous comeback TV special of ‘68 (minimum bid: $750,000). Other lots include gold pistols, money clips, glassware, boots, license plates and some other suitably outlandish wares.

Brigitte Kruse, founder and CEO of GWS Auctions, found and assembled the pieces, with help from the musician’s former wife, Priscilla Presley, according to Reuters. (Presley does not own any of the pieces, though.)

“Well, it brings back memories for sure,” Presley told the publication.

She added that the couple often bought or commissioned jewelry for Parker as they didn’t know what else to get him. It actually became a running joke between the Presleys. Although Priscilla is protective of the items—some of which she designed—she has supported the auction as the pieces are authentic. Indeed, most of the lots come with one or more letters of provenance from Priscilla herself, fellow singer Jimmy Velvet or other members of Presley’s inner circle.

“There is so much product out there that is not authentic at all and that worries me,” Presley said. “I want to know for sure that that is going to go to someone who is going to care for it, love it.”