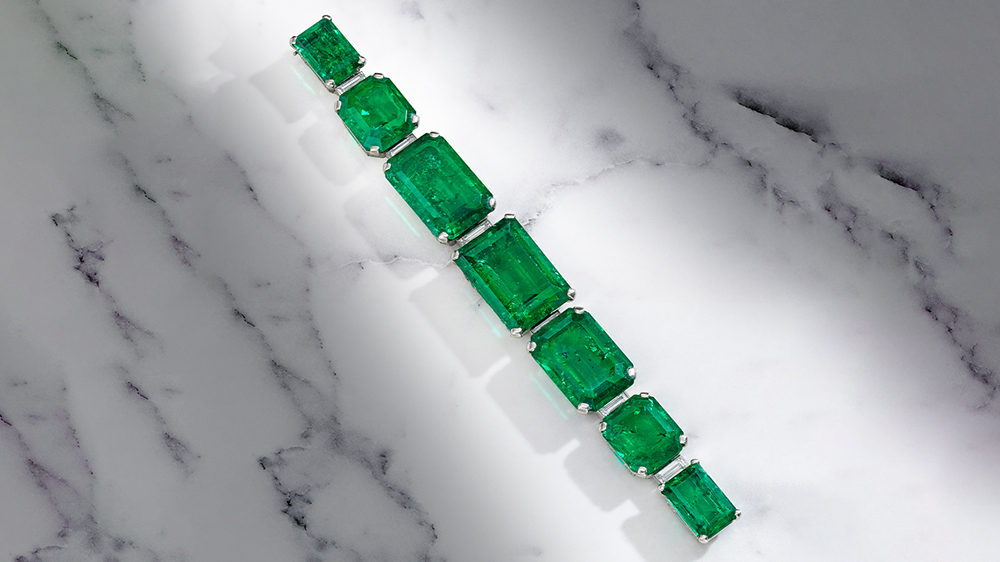 Bonhams is about to auction off a stunning emerald and diamond Cartier bracelet that’s estimated to hammer down for $750,000 to $1.25 million. Dated circa 1926, the bracelet comes in at 101 carats and features seven enormous Colombian emeralds interspersed with baguette-cut diamonds.

“This is an extraordinary bracelet that is a once-in-a-lifetime jewel,” Caroline Morrissey, the director of jewelry for Bonhams New York, told Barron’s Penta. “The size and quality of the emeralds is unusual, and transfixing, and draws the viewing into the stone.”

The bracelet was originally owned by Hélène Irwin Crocker Fagan, one of the richest American heiresses during the Belle Époque and Art Deco eras. It was likely a special order, and has remained in the family for close to 100 years.

Irwin Crocker Fagan was the daughter of William G. Irwin, whose fortune came from sugar companies in Hawaii. She first married Templeton Crocker, the grandson of railroad magnate Charles Crocker, in 1911. After their divorce, she married the businessman Paul Fagan.

Her exquisite bracelet is just one centerpiece of Bonhams New York Jewels auction, occurring on May 24. Alongside Irwin Crocker Fagan’s jewels will be items from two other famous women in Hollywood history: Bette Midler and Lady Sylvia Ashley; the latter was married to both Douglas Fairbanks and Clark Gable.

Lady Ashley’s collection includes an Art Deco aquamarine Cartier bracelet, a Van Cleef & Arpels diamond charm bracelet and even a gold heart charm that contains a photo of Fairbanks and a lock of brown hair. Midler is auctioning off more than a dozen pieces, including a Tiffany & Co. diamond and yellow sapphire feather brooch and a Cartier gold watch.

“Many of the pieces in this sale are on the market for the first time and it is an incredible opportunity to buy a beautiful jewel with a famed and glamorous story behind it,” Morrissey said in a statement.

These items, especially Irwin Crocker Fagan’s emerald bracelet, would certainly bring some of the glitz of the Roaring Twenties into this century.