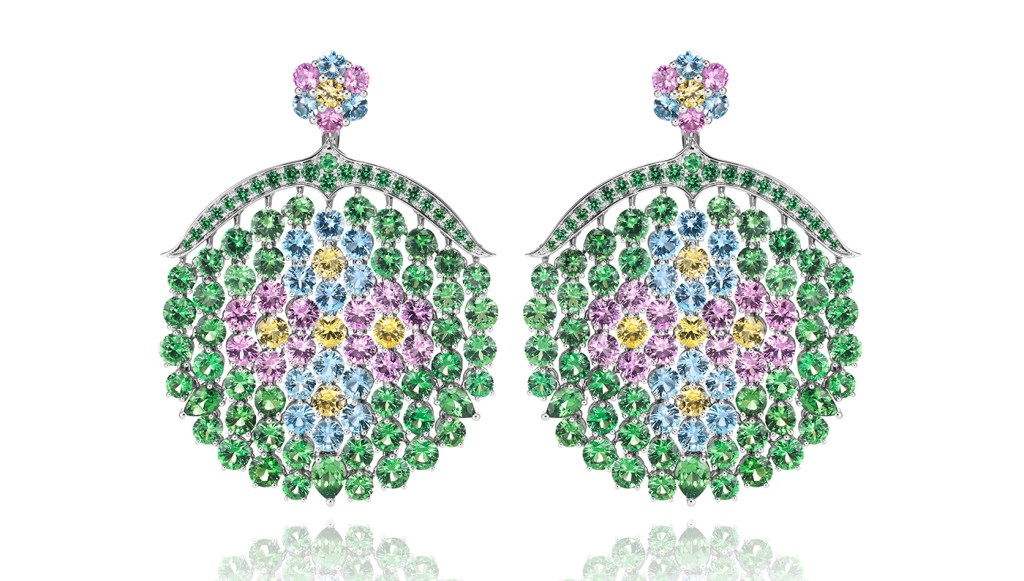 Tsavorite, a form of grossular garnet, is a relative newcomer in the ancient world of gemstones. The luxuriant gem, which ranges in color from a light to a deep grass-green, was first discovered by Scottish-born geologist Campbell Bridges in Tanzania in 1967. When the Tanzanian government nationalized the mine shortly thereafter, Bridges moved his operation to Kenya, where he discovered the gemstone close to Tsavo National Park in the 1970s. However, it was Tiffany & Co. that catapulted tsavorite to fame—Henry B. Platt, the company’s president, fell for the gem’s rich hue, and in 1974 launched a marketing campaign around the gemstone, naming it after the park near where it was discovered. Today, tsavorite is said to be 200 times rarer than emerald, and designers are turning to it more than ever—each taken with its intense green hue and extraordinary brilliance. As these five designs show, jewelers around the globe are finding distinctive ways to spotlight tsavorite’s unique and unparalleled vivacity, whether by itself or alongside other colored gems.

This year marks not only the 70th anniversary of the Cannes Film Festival, but also the 20th year of Chopard’s official partnership with the festival. To celebrate this dual anniversary, Chopard’s artistic director Caroline Scheufele created a new Red Carpet Collection full of vibrant color, which is guaranteed to turn heads on the festival’s famous steps. In these feminine earrings, an intricate tapestry of tsavorite with blue topaz and yellow and pink sapphires create a delicate yet dramatic effect (price upon request). (chopard.com)

Tsavorite’s invigorating intensity is the perfect choice for conveying the tropical inspirations behind this year’s Blue Book collection, the Art of the Wild. As the tsavorite-studded fronds of this wide cuff wrap themselves around the arm in all directions, the wearer is immediately transported to the lush, untamed depths of the rainforest (price upon request). (tiffany.com)

Lebanese jeweler Sélim Mouzannar has a connoisseur’s eye for colored gemstones and was drawn to tsavorite when looking for dramatic color contrasts for his new black enamel collection. “I was looking for a bright color association around the basic blue-red-green, but with a fresh and intense twist,” he said. “I chose tsavorite because it is slightly brighter than emerald, with a metallic effect.” Mouzannar’s triple-stone ring spotlights a luminous tsavorite as well as a blushing rhodolite and crisp blue tanzanite ($4,220). (selimmouzannar.com)

In Arman Sarkisyan’s locket, tsavorite is the perfect partner to the rich 22-karat yellow gold favored by the Los Angeles jeweler. “Above all, I love the beautiful intense color of tsavorite,” says Sarkisyan. “Its faceting structure makes it shine, and its color really set it apart from other gems ($21,300).” (armansarkisyan.com)

Given tsavorite’s rarity, large examples are few and far between. Los Angeles–based designer Sylva Yepremian paired her lucky discovery of an 8-carat tsavorite with an equally exceptional 9-carat cushion-cut yellow diamond in this timeless 18-karat yellow-gold ring ($245,000). “I was drawn to this particular tsavorite for its exceptional shape and size, as well as its distinctive hue,” says Yepremian. (sylvacie.com)