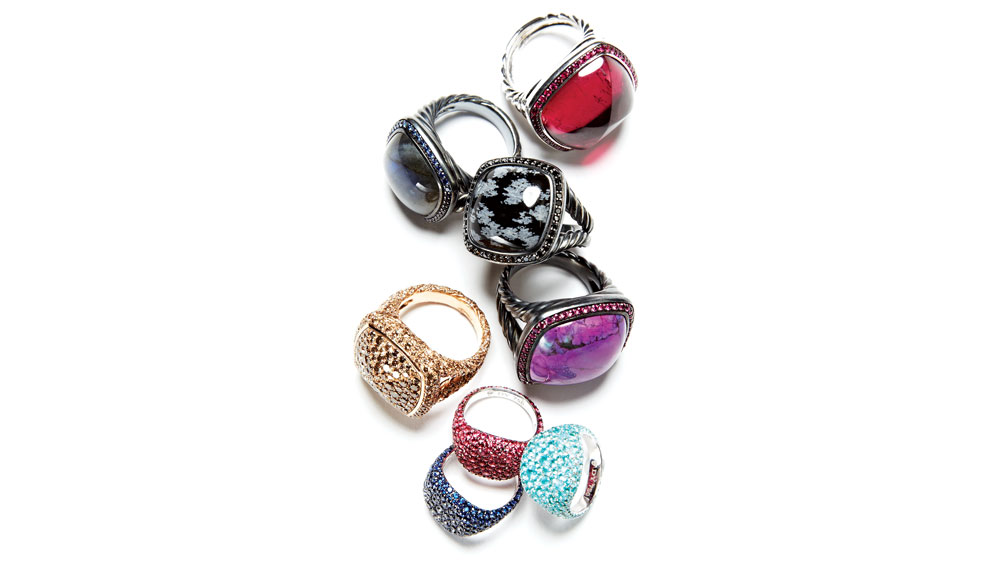 For last year’s 30th anniversary of David Yurman’s signature Cable bracelet, the jeweler’s son Evan re-created the object (usually made of precious metal and encrusted with gems) as a limited-edition series of colorful, anodized-aluminum bangles. “Evan took a common base metal and made it into a design, like the Campbell’s soup can,” says David, who started the company with his wife, Sybil, 34 years ago. “It was counterintuitive to what we do.”

To David’s surprise, the bright aluminum bracelets sold out, and this success encouraged him to collaborate with Evan on reshaping yet another Yurman classic, the 20-year-old Albion motif. This brand hallmark, which uses chunky, square-shaped cushion-cut stones with slightly rounded, convex edges, has been not only refined and contoured but also produced in an arresting mix of gemstones and metal treatments. The Albion Collector’s Series features unusual stones, some of which the Yurmans uncovered last year at the Tucson Gem & Mineral Show. “Evan knows more about stones than I’ll ever know,” says David, whose favorite outing is his annual trip with Evan to Arizona in search of inspiration. “Evan’s talent is in his DNA.”

Father and son are similar in many ways, but like any creative person, Evan explores his own direction. When the younger Yurman first joined the business more than a decade ago, he developed an innovative men’s collection that combined such unconventional materials as pietersite and dinosaur bone with bold, contemporary forms. He then parlayed his love of colorful gemstones into the company’s first high-jewelry collection, which presented rare, one-off stones in a range of important pieces. And inspired by antique pinkie rings he had seen in stores and books, Evan broached with his father two years ago the idea of creating modern examples in every colored gemstone imaginable.

Although he also serves as the company’s CEO, David is not ready to surrender his role as lead designer to the next generation; yet he clearly enjoys seeing the brand’s aesthetic evolve through his son’s imaginative contributions. “Evan didn’t want to follow in his parents’ footsteps,” he says. “It was important that he forge his own territory.”