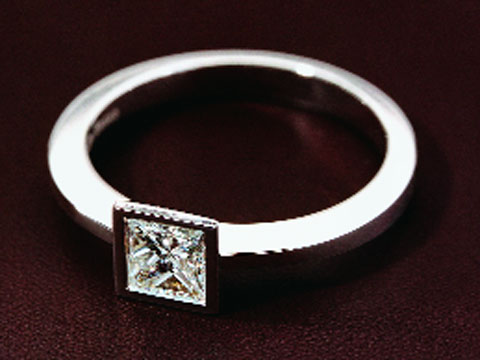 While de beers has spent millions of marketing dollars instilling in our minds that a diamond is forever, its latest joint venture with LVMH Moët Hennessy Louis Vuitton makes a slightly different statement: A diamond is today. The massive South African diamond conglomerate that controls about 65 percent of the world’s diamond market is leveraging its dominant position to enter trendsetting, fashion-driven diamond jewelry retailing.

In January 2001, De Beers Group formed a partnership with LVMH to market a proprietary collection of diamond jewelry through branded retail stores. Because De Beers effectively controls most of the world’s wholesale diamond market, the European Union immediately launched an antitrust investigation. The proposed partnership was approved a year later, and the independent diamond jewelry house De Beers LV was formed. Independent is the operative word, because the partnership creates a separate company that is not prohibited by antitrust laws from selling in the United States, as De Beers Group is.

Spearheading this grand entrée into the retailing world is a high-profile flagship store on the corner of Old Bond Street and Piccadilly, in the heart of London. The new jewelry collection, designed by cutting-edge innovator Reema Pachachi, made its debut on this stage in November.

“We hired Reema as creative and design director to lend a decidedly young and fashionable aspect to the collection,” explains De Beers LV CEO Alain Lorenzo, who hopes to change the younger generation’s perception that diamonds are stodgy and out of reach.

“We are creating jewelry to celebrate the magic of diamonds,” says Pachachi, who is known for providing edgy glitter to London’s fashion shows. “Our collections have essential shapes and clean lines that allow diamonds to speak for themselves.” Pachachi once taught jewelry design at St Martins School of Art and Design in London, and owned her own successful jewelry boutique in the city’s chic Belgravia neighborhood.

Even before the jewelry made its debut, De Beers LV had established the all-important fashion/celebrity connection by partnering with model Iman. She appeared at last year’s Cannes Film Festival wearing the 203-carat Millennium Star, the world’s largest D-flawless diamond, set in a sinuous platinum necklace designed by Pachachi. While the Millennium Star is not for sale, it inspired one of the five debut collections.

Rather than follow tradition, De Beers LV is making its stand at the fashion front lines. The Leather collection boldly pairs woven leather strips with diamonds. In a different vein, the Flowers collection features a minimalist floral motif reinterpreted for the 21st century. One elaborate Flower necklace was auctioned at amfAR’s charity event last May for $175,000.

Given the disposable nature of women’s fashion, most of the pieces are much more affordable: Prices start at around $700—and that includes the diamonds. “Fashionistas usually choose costume jewelry to make their statements,” says Lorenzo. “With Reema’s designs, which are fully rooted in the fashion world, we want to make buying the real thing a possibility.”

Once De Beers LV establishes itself in Europe, it plans to move in on Tiffany’s and Cartier’s New York turf with a Fifth Avenue store in the St. Regis hotel that is slated to open in 2004.