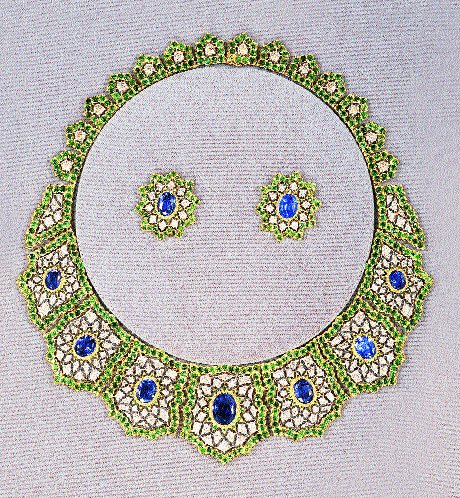 In today’s competitive business environment, with its endless mergers and acquisitions, a thriving family business that is driven by heritage and passion more than the bottom line is a treasure in and of itself. Jewelers have long built their fortunes on family names, some of which evoke instant respect and trust gained through decades (or in some cases, centuries) of commitment to a genuine artistic mission. Still, without the authentic bloodlines and the leadership of subsequent generations who have been imprinted with the family’s values, such names would become mere brands.

This is not the case with these four distinguished family-owned jewelry houses that have passed from generation to generation, all preserving their past as they prepare for the future.

Mario’s natural aptitude for design and craftsmanship was passed down to only one of his five sons, Gianmaria, who honed his skills working alongside his father for decades. Today, as the third generation assumes the company’s helm, only one of Gianmaria’s sons, Andrea, has inherited the artistic abilities to carry Buccellati style into the 21st century. Like his father before him, the 43-year-old Andrea works side-by-side with his father.

“Andrea has absorbed the spirit of the company,” explains Mario Buccellati II, Andrea’s cousin and the founder’s grandson, who manages the business in North America. “He maintains our tradition, but with his own individual interpretation, which is not an easy task.” The younger Buccellati designer employs the family’s characteristic techniques, such as the honeycomb texture and braided gold chain, but in pieces that are more suited for everyday wear, in contrast to his father’s often-fantastical designs.

Buccellati family members are not automatically entitled to take over the business, stresses Mario, who joined the company 22 years ago after a series of apprenticeships as a goldsmith and silversmith. His five children will also have to earn their places in the company by working their way up from entry-level positions.

As you may expect, the Buccellatis have had numerous offers to sell, but they are intent on remaining independent and on growing without the help of outside investors. “Some family companies have to sell because they need financing or they lack a future generation who is passionate about the business,” says Mario. “We have both.”

Without the financial backing of a conglomerate, however, the speed of Buccellati’s growth has been restricted. Over the past few years, the family has expanded its offerings with the introduction of a Buccellati watch collection. The company is searching for high-profile store locations, which will include a new American flagship in New York. “We have a huge potential to grow the Buccellati business,” says Mario. “Our biggest asset is our brand equity, and we can grow without having to change our signature style.”

A Date with Destiny

As the eldest of five children, Kokichi Mikimoto was expected to take over the family noodle shop that had been passed down for generations. To the dismay of his relatives, he turned his back on the restaurant business and pursued his own dream of cultivating a natural-looking pearl.

In 1893, after years of experimentation, Mikimoto unveiled the world’s first cultured pearl. His discovery brought him worldwide acclaim and a nickname: The Pearl King. He was later honored as one of Japan’s 10 greatest inventors. Mikimoto, however, was not just an inventor; he was also a savvy marketer. He traveled around the globe, exhibiting his pearls at high-profile world fairs, and opened offices in London, Paris, Shanghai, and key American cities, establishing his cultured pearls as a fashionable and affordable option to natural pearls.

Today, a new generation continues a similar focus on international fashion and marketing. “The jewelry business is a fashion business,” says Toyohiko Mikimoto, the company’s current president and the husband of a fourth-generation Mikimoto descendant. “It is more important to keep the company modern rather than maintain our tradition.”

Toyohiko, who joined the business in 1977 at the request of his father-in-law, hired a stable of international designers to infuse a cosmopolitan edge into the staid collection. The once exclusively Japanese creative team now includes Italian, French, and American designers. Today, dangling earrings or sexy lariats portray pearls in a fashionable light, a striking contrast to the classic strands that made Mikimoto famous. Toyohiko is also expanding Mikimoto’s global image with new stores in Milan and Monte Carlo. The company also plans to open several more in key cities in America, Europe, and Asia.

As Mikimoto’s business flourishes, it has shifted away from producing its own pearls because it is more cost-effective to purchase pearls on the open market at Japanese Akoya pearl auctions and throughout the South Seas. “It has become more efficient to buy pearls,” explains Mikimoto, “since we use only the top 10 percent of the cultured pearls that are available.”

Kokichi Mikimoto, who lived to be 96, would surely be proud of the way his pearl dream has persevered. Toyohiko says there is no pressure for his two sons to join the family business, though his 29-year-old recently came on board. Like the family patriarch, he believes: “Everyone should pursue his own wishes.”

Torrini marks its evolution in centuries, not decades.

The House of Torrini has been in the same Italian family for over 600 years, making the jeweler one of Italy’s most revered and historic treasures. Founded in 1369 as a blacksmith shop that forged armor for the knights of the day, Torrini evolved into a goldsmith that prospered throughout the Renaissance era and beyond.

Its historical standing qualifies Torrini as a member of the prestigious Les Hénokiens, an association of international companies that are at least 200 years old and still managed by the original founder’s descendants. Naturally, Fabrizio Torrini, who represents the founding family’s 25th generation, felt pressure to join the business and carry on its legacy. “This is not just a company, it’s a family heritage,” says the handsome 40-year-old, who works with his father, Franco, and sister, Francesca.

Despite its impressive lineage, Torrini is a low-profile jeweler that prefers to keep its business small and exclusive. It operates Torrini boutiques in Florence and Sardinia and sells to only 30 other jewelry stores worldwide. In its small Florence workshop, the jewelry is still made entirely by hand, employing some techniques that date to the Middle Ages. “Our mission is to keep an eye on the past but also look to the future,” says Torrini. One thing that has remained the same through six centuries is the company’s trademark insignia: half of a four-leaf clover for luck and a spur to represent its blacksmithing origins.

Some of Torrini’s goldsmithing techniques are family secrets that will never be revealed. Most of its designs are inspired by the tradition of Florentine goldsmiths, who hammer, emboss, and chisel the metal to create a subtle texture. After hours and sometimes days of tedious handwork, each piece is dipped in “Cellinian Water,” which is made from a secret formula and used to enhance the texture and gold color. Next, each piece is polished with a pure cotton brush, and then some are set with diamonds or colored gemstones.

Even Torrini’s contemporary and bold jewelry styles echo the past with their distinctive finish and gold hues. While change is slow at Torrini, Fabrizio still insists his generation is more daring than his ancestors. “We want Torrini to last several more generations, and we need to keep creating new designs to survive.”

Wellendorff carries on a symbolic legacy.

Ernst Alexander Wellendorff recognized the power of an identifiable status symbol even back in 1893, when he established his company. This prominent German goldsmith, who catered to European royalty, decided to mark each of his pieces with a diamond-studded W. Today, Wellendorff jewelry still bears its diamond W, which is now a familiar luxury logo among Germany’s elite.

Twenty-five years ago, Wellendorff introduced its revolutionary gold silk rope design, which quickly became the company’s signature design. The soft, smooth gold rope necklace is made from an 18-karat gold wire that is the length of two football fields and is hand-woven and twisted in a process that can require four weeks of labor.

“We are specialists in 18-karat gold just as our great-grandfather was,” says Christoph Wellendorff, who works alongside his parents, brother, and sister-in-law at the company’s headquarters in Pforzheim. They closely guard the familial name and business, and strive to maintain its original values. “We are a vertical company, which means we design, mix our gold alloys, manufacture, and polish each piece of jewelry under the control of our own workshop,” he says. “That is the secret to our success.”

While the family prides itself on carrying on tradition, it is also keenly aware of the need to stay fashionable and fresh. “Jewelry should be full of energy and fun,” declares Christoph, who designed the company’s first enamel pieces as a gift for his wife 10 years ago. Now, each year, new enamel colors are introduced to complement the latest trends in fashion.

“As a child, I always dreamed of joining the family business because I have a love of jewelry and gemstones,” he says. When it comes to his own three small children, he wants to give them freedom to make their own decisions. Even so, his 6-year-old son has already memorized numerous gemstone names and colors.