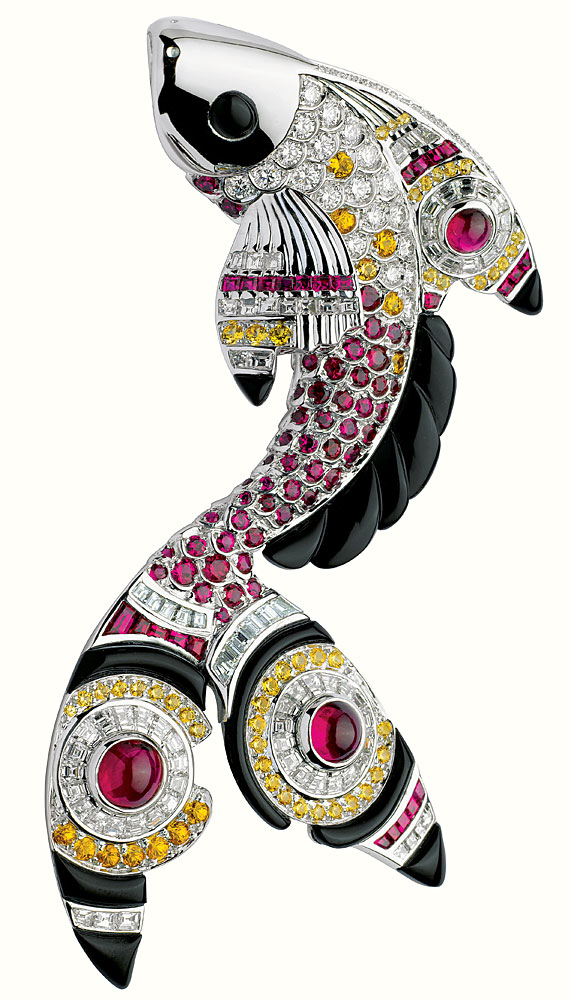 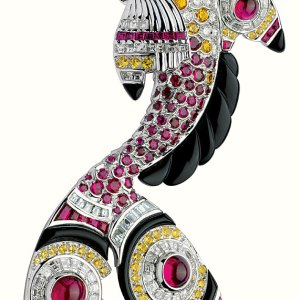 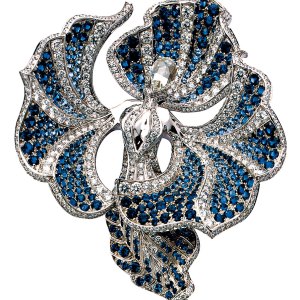 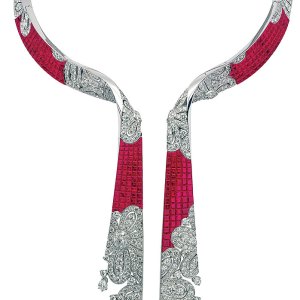 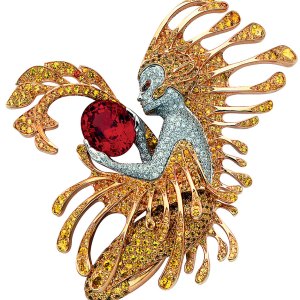 To introduce L’Atlantide (Atlantis), its latest high-jewelry collection, Van Cleef & Arpels hosted a party, last November in Hong Kong, at which it tried to re-create the collection’s namesake city. Sounds and scents of the sea flowed throughout the venue where the Paris jewelry house staged the event; there were walls of falling water and an expansive pool reflecting holograms of the designs. The pieces themselves reference marine life as well as the legends and symbols of Atlantis.

A team of seven jewelry designers, working in the Van Cleef & Arpels design studio above its Place Vendôme store in Paris, initially drew about 300 sketches for the collection. From these, company executives selected their 100 favorites. Van Cleef & Arpels’ gem buyers then acquired an extensive range of stones—including clear blue aquamarines and deep green tsavorites—most of which were recut and polished to fit the designs.

In the Van Cleef & Arpels workshop, also located at the Place Vendôme headquarters, on the top floor, master craftsmen sit at rows of benches, using magnifying eyeglasses to set stones and make the jewelry. They employ the same tools and skills as their predecessors did a century ago. The jewelers spent more than a year cutting and setting the stones for one particular L’Atlantide necklace, which portrays the waves of the sea with Mystery Setting sapphires. Only a dozen gem setters have the skills to master the Mystery Setting technique, which eliminates visible traces of metal to create a smooth, tilelike surface of gems. Another piece in the collection, a brooch, consists of a yellow and white diamond pavé nymph holding a 7-carat peach-hued spinel, emulating a fantasy figure from Atlantis fables.

The extravagant L’Atlantide debut recalls the Art Deco period, from 1920 to 1939, when jewelry was an integral part of the design movement that influenced decorative arts—from architecture and furniture to paintings and industrial design. The popularity of these highly stylized designs eventually gave way to a preference for sizable diamonds and other gems.

Through a succession of high-jewelry collections, Van Cleef & Arpels recently has been attempting to revisit the creativity of the Deco years. The house has produced two comprehensive collections each of the past three years; the few competing jewelry houses—such as Cartier and Bulgari—typically complete only one every other year. When it introduces its creations, Van Cleef does so with great fanfare, as evidenced by the Hong Kong soiree, hosting glamorous, international events akin to art exhibitions. “In jewelry there has been a lapse of creativity,” says Stanislas de Quercize, the company’s president and chief executive officer. “We are engaging our clients with stories and jewelry of substance.”

The Van Cleef and Arpels names first became united in 1896, when Estelle Arpels, the daughter of a precious stone dealer in France, married Alfred Van Cleef, the son of a renowned lapidary who was born in Amsterdam and had moved to Paris. In 1906, Alfred and his brother-in-law Charles Arpels opened a jewelry shop at 22 Place Vendôme; Charles’ brother, Julien, joined the business in 1908. The trio, each a jewelry and gemstone expert, quickly established a following of wealthy Russians and Americans. Through the years, various cultural events and phenomena influenced the house’s jewelry. Among these was the discovery of Tutankhamen’s tomb in 1922, which led the jewelry house to incorporate scarabs and sphinxes into its designs. Later during the Art Deco period, Van Cleef & Arpels’ jewelry exhibited floral patterns, modernist forms, and Asian influences that abounded in Deco design as the continent became more accessible to travelers.

Renée Puissant, Alfred and Estelle’s daughter, became the house’s artistic director in 1926, after her husband, Emile, a company administrator, was killed in a car accident. Her feminine designs depicting bows and flowers complemented that era’s fashions.

In 1930, under Puissant’s direction, Van Cleef & Arpels introduced the first minaudière, a widely copied jeweled hard case that served as an ornate evening bag. In 1933, the company patented the Mystery Setting, which remains one of the house’s most recognizable and sought-after designs. And in 1936, Van Cleef & Arpels debuted the Cadenas watch, which was modeled on a padlock and continues to be a hallmark design that has been updated over the years.

Around that same time, Julien Arpels’ three sons, Claude, Jacques, and Pierre, joined the business. The bon vivant Pierre, the youngest brother, was selected to create the engagement jewelry and wedding tiara for Princess Grace of Monaco in 1956. A decade later, he was asked to make the crown for the coronation of Empress Farah Diba of Iran. Claude, who left France in 1939 to establish Van Cleef & Arpels in the United States, was known for his passion for poetry, literature, and music. In 1967, choreographer George Balanchine asked him to develop an outline for what would become Jewels, a ballet based on precious stones that is still performed today. Jacques, who served as international CEO for 50 years and was the last family member to remain at the company, left the firm when Richemont acquired a 60 percent share of Van Cleef & Arpels in 1999.

In recent years, Van Cleef & Arpels has begun making innovative timepieces, benefiting from the technical expertise of its Richemont-owned sister brands Jaeger-LeCoultre and Piaget, and from the independent Geneva specialty house Agenhor. However, Van Cleef executives emphasize that the company is not a watchmaker. “We try to have a different vision of time,” says de Quercize. “We’re making poetic complications. These are mechanics with meaning, soul, and spirit.” As an example, he cites the company’s Midnight in Paris watch, which portrays the stars in the night sky over Paris at any given moment, with constellations painted on a rotating aventurine glass dial. Produced in collaboration with Agenhor, the watch also features a calendar indication that is surrounded by a ring of meteorite and visible through the caseback. On the dial of the Féerie watch, introduced in Geneva last spring, a golden fairy points at the hour with her wand, and the longest of her gossamer wings indicates the minutes. “It asks you every minute, ‘What is your wish?’ ” says de Quercize.

For its 100th anniversary in 2006, Van Cleef & Arpels fashioned the Lady Arpels Centenaire, using the same thin, 36 mm case that Pierre Arpels conceived in 1949. The watch’s dial, comprising a rotating, hand-painted enamel disk depicting scenes of the four seasons, completes a full revolution over the course of a year; the appropriate seasonal scene is displayed through an aperture. A new, limited-edition model, Lady Arpels Saisons Opéra, employs the same mechanism to show four different enamel-painted ballerinas, each representing a season. Dominique Baron, an independent artist who works from her home in Les Rousses, France, paints the dials.

The jewelry house made its first watch in 1910, upon a client’s request. During the 1920s and 1930s, when it was considered inappropriate for a lady to wear a watch on her wrist, Van Cleef & Arpels introduced inventive cases, such as the padlock-themed Cadenas, which cleverly concealed the watch’s dial. Other pieces resemble bracelets or golden ribbons tied around the wrist.

Van Cleef & Arpels produced L’Atlantide and its other recent high-jewelry collections partly in response to the record-breaking prices that art and jewelry—including its own pieces—have been commanding at auctions in the past few years. In 2006, Van Cleef & Arpels estate jewelry collectively sold for $35 million at auctions worldwide. “Auction sales are proof that if you buy something artistic and signed, it has lasting value,” says de Quercize, noting that a signed piece, one that is embossed with the Van Cleef & Arpels name, can command 10 times the price of an unsigned piece. The house’s signed Mystery Setting sapphire and ruby designs and fanciful floral brooches and necklaces have achieved the highest prices. At an October 2006 Christie’s auction, a Mystery Setting ruby and diamond brooch sold for $284,800, nearly double its estimate, and a ruby and diamond Mystery Setting bracelet garnered $273,600, far greater than its $140,000 to $180,000 estimate.

Like the demand for signed vintage pieces from Van Cleef & Arpels (and its few peers), the interest in contemporary jewelers has been growing. Pieces by Joel Rosenthal (known as JAR) and Michelle Ong for Carnet have sold for more than their estimates at recent auctions. At another October 2006 Christie’s auction, a 22-carat diamond ring designed by JAR and estimated at $800,000 to $1.2 million fetched $1.8 million.

“Van Cleef & Arpels witnessed this trend, and while keeping true to their traditions, they also moved into a more contemporary style with their new collections,” says François Curiel, chairman of Christie’s Europe and an internationally recognized jewelry expert. Curiel cites the company motto that Jacques Arpels coined in 1961, Il est des signatures auxquelles ont tient (There are some signatures you really care for), and says that it still holds true. “When a buyer looks at a piece of jewelry and then learns it’s signed by Van Cleef & Arpels,” Curiel says, “you can see the excitement in her eyes.”