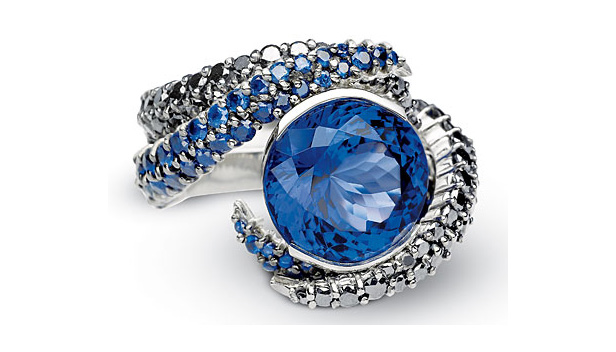 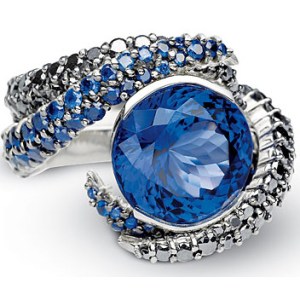 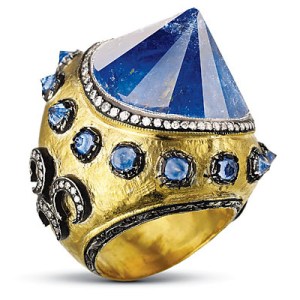 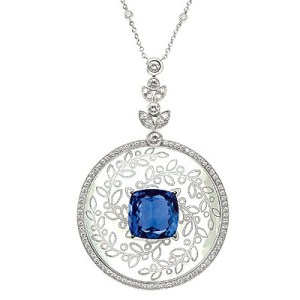 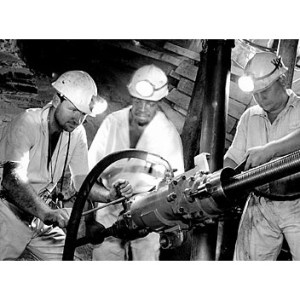 While he was a gem buyer for Tiffany & Co., Harry Platt presumably was not easily impressed by a stone’s beauty. But when a Tanzanian gemologist presented him with a newly discovered deep royal blue gem in 1967, Platt decided that it was the most important gemological find of the century. Platt, who is the great-grandson of company founder Louis Comfort Tiffany, and who would serve as president of Tiffany & Co. from 1974 until his retirement in 1979, christened the stone tanzanite, after its country of origin. He also swiftly negotiated with local miners to attain a large cache for Tiffany’s Manhattan store.

Like the Maasai tribesman who, as the story goes, discovered the first tanzanite crystal protruding from the soil while he was herding cattle in the foothills of Kilimanjaro, Platt was captivated by the gem’s pleochroic qualities, which enable it to exhibit multiple colors simultaneously. Local prospectors initially believed the stone was an unusually colored sapphire, but it was later determined to be a previously unidentified zoisite mineral.

Since its discovery, tanzanite has remained relatively obscure. However, Melvyn Kirtley, managing director and president of Tiffany & Co. UK, is among those who believe tanzanite deserves to stand among the rarest and finest gems. It is indeed rare and soon could become even more so; caves in Tanzania’s Merelani hills are the gem’s only known sources, and the leading company among those mining the caves reports that the deposits will be depleted in about 12 years. (Recent claims of discoveries in Kenya proved to be false.)

What makes the stone “remarkable and unique,” says Kirtley, is its ability to appear as a purplish violet color in indirect sunlight and as a velvety blue in incandescent light. The tanzanite spectrum ranges from pale blues to deep violets and cobalt blues that reflect flashes of red and green. The latter variety is the rarest and has become the most coveted. In fact, less than 1 percent of the stones that are mined bear the deep blue shades or dual-color characteristics of a grade-AAA-quality gem.

“You see so much pale tanzanite, and quite frankly, it’s not that appealing,” says Kirtley. “It’s very difficult to find the type of quality tanzanite that we want to sell, the kind that exhibits a nuance of green and violet. When we do find it, we grab it.” One such tanzanite specimen—a 233.96-carat, emerald-cut stone—is the centerpiece of a Tiffany brooch that sold last year for $400,000.

The price for that piece is still far below that of an exceptional diamond, though examples of sizable high-quality tanzanite are a thousand times rarer than diamonds, according to Bernard Olivier, consultant geologist for TanzaniteOne. The organization was established nine years ago and now controls 30 percent of the market, making it the largest tanzanite mining company. “The formation of tanzanite requires a juxtaposition of very unique geological conditions and deformational events,” says Olivier. But because Tanzanite is a fairly recent discovery and has not been widely marketed, it has remained relatively affordable. In contrast, the price of diamonds has skyrocketed in recent decades, thanks in large part to De Beers’ clout in the marketplace.

Olivier explains that the formation of tanzanite took place some 550 million years ago, when the supercontinent began breaking apart to create the separate continents. The event triggered a massive reformation of rocks and liquids in eastern Africa that, when combined with extreme temperature changes, created sausage-shaped pockets called boudins. Tanzanite crystals formed within these boudins, which measure from a few to dozens of feet long and are located hundreds of feet underground. Once extracted, the brownish purplish rocks are heated to 842 degrees Fahrenheit to enhance their blue violet color.

TanzaniteOne’s geologists identify the locations of the tanzanite pockets by using satellite imaging, soil sampling, and drilling. Once the geologists find a likely site, miners descend into the caves, where they set explosive charges that are timed to ignite after they have returned safely to the surface. Because basic excavation tools would not exert enough force in the bedrock, explosives must be used to expose the boudins and extract the stones. Despite the potential dangers posed by these methods, TanzaniteOne has reported only one fatality at its mines in the past five years. In 1998, prior to TanzaniteOne’s arrival, when no dominant concern operated in the tanzanite mining industry, a mine flooded and killed dozens of workers. In various reports, the death toll ranged from nearly 60 to more than 100. In 2002, in another accident involving a small-scale operation, more than 30 miners died.

South African mining executive Mike Nunn formed TanzaniteOne in 1998 and subsequently acquired 30 percent of the tanzanite mines from firms that held the government licenses. The remaining 70 percent of the industry is divided among several smaller companies and independent miners.

In 2004, Nunn, who recently stepped down as chief executive officer but remains on the board of directors, listed TanzaniteOne on the London Stock Exchange’s Alternative Investment Market. A year later, TanzaniteOne became the first mining company to pay corporate taxes in Tanzania, which primarily relies on a struggling agrarian economy. (While Tanzania’s gold mining companies are larger than TanzaniteOne, all claim to be operating in the red and therefore have avoided paying taxes.) In addition to tanzanite and gold, the country also has deposits of tsavorite, a rich green gem, and diamonds.

What is now Tanzania was a German colony from the 1880s until 1919, when it became a British Mandate. In 1961, the country, then known as Tanganyika, gained its independence. Three years later, it united with Zanzibar to form the United Republic of Tanzania. The country held its first multiparty election in 1995. Over the past decade, the relationship between the governments of Tanzania and the United States generally has been tepid but not adversarial.

In 1998, al-Qaeda operatives exploded a car bomb outside the U.S. embassy in the city of Dar es Salaam, killing at least 10 people. Then in the aftermath of the September 11 attacks, tanzanite was linked to the terrorist group. In fall 2002, a Wall Street Journal article claimed that sales of tanzanite were used to launder money that then funded al-Qaeda. This prompted jewelers in the United States—the nation that accounts for 80 percent of the world’s tanzanite purchases—to remove tanzanite from their cases immediately. The retailers that stopped selling the stones ranged from Tiffany & Co. to Zales. As a result, the price of tanzanite plummeted as much as 75 percent, and sales dropped significantly, until 2003, when the U.S. Department of State completed its investigation and found no connection between the tanzanite trade and al-Qaeda.

Subsequently, the Tanzanian government and major industry stakeholders implemented measures known as the Tucson Tanzanite Protocols to ensure that tanzanite is traded through legitimate and transparent channels by licensed dealers. Stones are distributed with certificates of origin indicating that they have not been smuggled out of the country, and TanzaniteOne instituted a sightholder distribution system that mimics the De Beers method of supplying parcels of rough stones to prescreened dealers throughout the year. At present, TanzaniteOne works with five sightholders.

Tanzanite mining became the subject of controversy again last year, when a documentary made allegations of child labor violations. (The Tanzanian government prohibits anyone younger than 18 from working in the mines.) The film, titled Gem Slaves: Tanzanite’s Child Labour, was made by the Integrated Regional Information Network, which is run by the U.N. Office for the Coordination of Humanitarian Affairs, and screened in September at the U.N. headquarters in New York. Also, some European and U.S. television stations broadcast the documentary.

Without citing the film by name, TanzaniteOne’s chief executive officer, Ian Harebottle, asserts that some recent claims surrounding child labor have presented “what amounts to an extremely distorted picture of the current realities.” Harebottle acknowledges that child labor has been an issue within the industry; however, he says, in recent years the Tanzanian government and others with a stake in tanzanite mining have made great strides to eradicate those abuses and to improve the industry’s labor practices in general.

TanzaniteOne reports that it shares resources, research, and its health and safety expertise with small-scale miners through its Small Mines Assistance Program. TanzaniteOne also says that it pays its miners, who are predominantly Tanzanian nationals, three times the minimum wage. (The country’s minimum wage is equal to less than $50 a month.) In the small-scale operations not controlled by TanzaniteOne, the miners usually work on commission, collecting a percentage of the value of the stones that the mine produces. When the mine is unproductive, those workers go unpaid.

An often-cited statistic claims that 60 percent of Tanzania’s population of 36.5 million lives on less than $2 a day. The country’s per capita gross domestic product was $290 last year (compared to more than $37,000 for the United States), and in 2005, according to The Economist magazine, Tanzania registered the second-lowest rate of purchasing power per person among all the countries of the world.

TanzaniteOne established the nonprofit Tanzanite Foundation, which primarily supports the Maasai tribespeople who inhabit the land surrounding the mines. Over the past few years, the organization has donated nearly $600,000 for community improvement projects, which include building and refurbishing schools, funding a new police station, improving roads, and digging watering holes for the Maasai’s nearly 5,000 head of cattle in the region. The foundation also provides safety training for independent miners and loans them expensive mining equipment.

With Tanzaniteone’s distribution network in place, high-quality tanzanite is more readily available to influential U.S. designers, such as Sharon Khazzam, who sells her collection through Barneys New York. “I’ve been seeing tanzanite for years, but only recently laid eyes on incredible-quality tanzanite,” she says. In December, Khazzam acquired two exceptional 18-carat tanzanites, which she plans to set into rings priced in the $50,000 range. “I paid handsomely for these stones,” she says, “but I simply had to have them; they’re so lively and vibrant.” According to the traditional gemological guidelines, only diamonds, sapphires, rubies, and emeralds are considered “precious” stones, while all others are labeled “semiprecious,” implying that they are more common. But given the extreme rarity of the finest tanzanite, purplish pink spinel, Paraíba tourmaline, and other exotic-colored gems, Khazzam argues that the guidelines and their terminology have become archaic. “There is no longer precious or semiprecious stones—that’s an old-fashioned way of thinking,” she says. “People have a much more sophisticated understanding of stones today than they did 10 years ago.”

Nak Armstrong, designer of the Anthony Nak collection, says he prefers to work with tanzanites instead of sapphires. “A large tanzanite has complexity of color and is far more radiant and luminous than a sapphire, which can appear flat,” explains Armstrong, who operates a boutique in Austin, Texas, with his business partner, Anthony Camargo. “This stone is for a woman who already has her diamonds and sapphires and wants something unique that will have people asking, ‘What is that stone?’ “