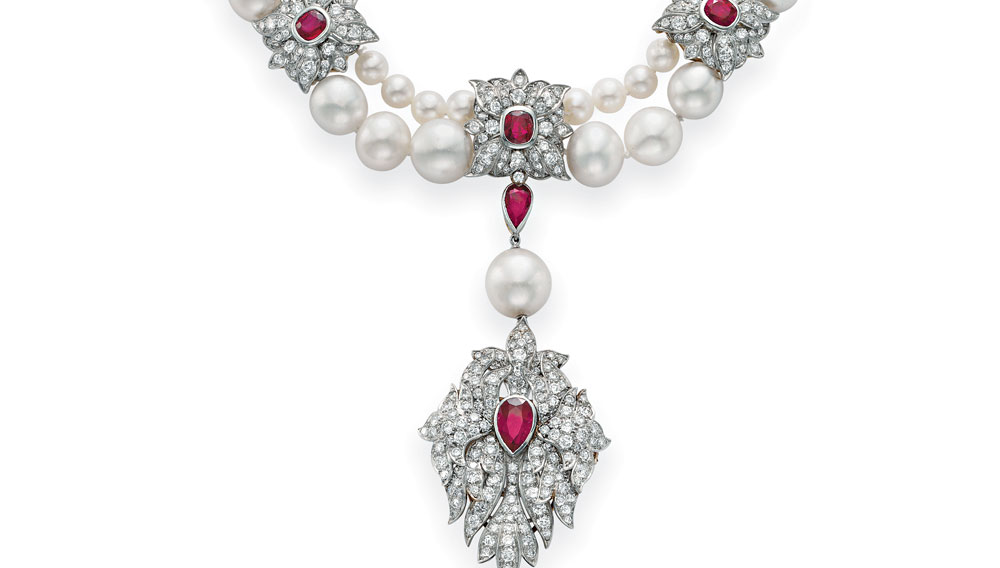 The escort swipes his security card past the magnet, and the door opens. Then a second secured door, and a third. At last, we arrive in a small salon in the inner sanctum of Christie’s New York, where more security personnel is standing guard. Inside, 20 of Elizabeth Taylor’s most prized personal jewels are casually arranged on velvet trays: the Bulgari pendant with a sapphire the size of a walnut and the depth of an ocean; the Burmese ruby suite, so bright you cannot gaze too long without feeling a need for sunglasses; the 33-carat asscher-cut diamond ring, tempting enough to slip on a finger.

“There will never be another sale like this one,” coos Rahul Kadakia, Christie’s senior vice president and head of its jewelry department, and the host of this private preview. Indeed, the December auction of Taylor’s 270-piece collection in New York is likely to be one of the century’s greatest private jewelry sales. The anticipation generated enormous publicity months before the opening bid, and Kadakia expects that the auction will generate more than $30 million and break records, partly because of the superlative quality of the pieces and partly because of the endless fascination with the actress who wore them.

Taylor, who died on March 23 at age 79, amassed what might be considered America’s crown jewels, choosing pieces with a storied history before adding her own to their lineage. “The jewelry is a collection of Elizabeth’s memories,” says Lorraine Schwartz, a New York jeweler who sold Taylor several pieces over their 10-year friendship. “Liz taught me that jewelry is about moments in a lifetime that you want to remember and carry with you.” Schwartz particularly recalls a pearl-and-diamond brooch that brought tears to Taylor’s eyes because it reminded her of a piece husband Mike Todd gave her shortly before he died in a plane crash. She bought the brooch.

Taylor’s passion for jewelry was never a secret: Her jewels were as large and lively as her love life, and she wore big, expensive pieces as casually as throwing on a sweater. She was the last of an era of glamorous stars who dressed for every occasion, unlike today’s A-list celebrities, regularly snapped wearing flip-flops and borrowed gems. Dressing down was simply not in Taylor’s vocabulary. “Liz called me one night and mentioned she fell and broke her leg,” Schwartz recalls, “but she said she was lying in bed wearing her new earrings, and loved them.”

While Taylor tended to buy jewelry spontaneously—as on the frequent visits she and husband Richard Burton made to Bulgari in Rome when shooting Cleopatra—the pieces were often extraordinarily wise investments. “When spending hundreds of thousands of dollars on jewelry in the ’60s, they had to be thinking it was also a smart purchase,” Kadakia says as he holds up the Bulgari sapphire sautoir, the better to glimpse what he calls a perfect gem. “They were most definitely savvy buyers in how they approached building a collection.”

Taylor’s collection is being offered in two auctions, on December 13 and 14, and includes pieces from the preeminent houses such as Cartier, Van Cleef & Arpels, and David Webb, as well as Bulgari. One of the greatest treasures is the Pérégrina pearl, which Burton purchased for a mere $37,000 in 1969 and Taylor had made into a necklace at Cartier with rubies and diamonds, modeled after one in a 16th-century portrait of Mary, Queen of Scots. La Pérégrina, which means “the wanderer,” has an estimate of $2 million to $3 million, but Kadakia predicts that the necklace will sell for $3 million to $5 million. The pear-shaped pearl, weighing the equivalent of 50 carats, is one of the world’s largest natural pearls, and even before Taylor, it had a fascinating provenance. A slave uncovered it in the Gulf of Panama in the 1500s and was freed because of his discovery. Later it was part of the Spanish royal jewels, and the Bonaparte family owned it in the late 1800s before it landed on Taylor’s famous décolletage. In her coffee-table book Elizabeth Taylor: My Love Affair with Jewelry, she reveals a tense moment when the pearl fell off its chain and went missing—until she discovered it in her Pekingese puppy’s mouth.

The Elizabeth Taylor diamond, an exceptional 33.19-carat D color, is a nearly flawless stone about the size of a walnut. Burton purchased it in 1968 at Parke-Bernet Galleries for the outrageous, headline-making sum of $300,000. But the stone is classified as a rare Type IIA stone, the highest quality, and though it is now estimated at $2.5 million to $3.5 million, Kadakia expects it to go much higher. The comparable Annenberg diamond, a 32-carat, D-flawless stone, holds the world record for the highest per-carat price paid for a colorless diamond: Christie’s sold it for $7.7 million in October 2009. “Our estimates don’t take into account there is going to be a premium because it was owned by Liz Taylor,” Kadakia says.

Burton also had an appreciation for fine jewelry design. For Taylor’s 40th birthday he purchased the Bulgari Art Deco sautoir, estimated at $600,000 to $800,000, with that extraordinary 52.72-carat cabochon-cut Burmese sapphire. “Richard learned so much about jewelry, and his taste in jewelry became so refined,” Taylor wrote. “I think the more history there was to a piece, the more interested in it he became—there wasn’t anything that interested him that he didn’t do research on.”

The sale will also include numerous small, sentimental pieces, such as bracelets with charms citing the birth dates of Taylor’s children. Yet she appears to have owned nothing pedestrian; even her Bulgari gold snake watch is a highly desirable design. It has an estimate of $10,000, but Kadakia expects that it could reach $100,000. “I already have an Asian client who desperately wants the watch,” he says.

Later in life, Taylor commissioned Joel Rosenthal, the creative genius behind JAR, to create a pair of multicolored sapphire-pavé ball earrings. When JAR’s hard-to-get pieces come up at auction, they always collect a premium; these earrings, made in 2001, have an estimate of $100,000 to $150,000. With a sparkle in his eye, Kadakia presents them and yet another personal tidbit about Taylor’s treasures: Rosenthal selected the sapphires to match her famously violet eyes.