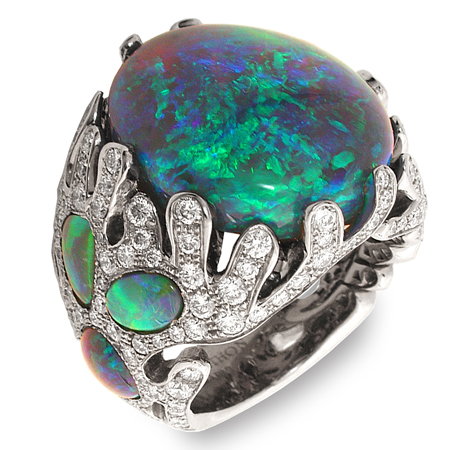 Though it recently debuted in the United States at Neiman Marcus, Mathon’s jewelry-making legacy can be traced to Paris in 1931, when the atelier was founded in the Palais Royal neighborhood and started producing pieces for Parisian high society. Current CEO (and designer) Frédéric Mathon, whose designer father Roger Mathon purchased the business from his uncle in 1971, eschews white diamonds for colored gems including sapphires, green beryls, tsavorites, paraíba tourmalines, and opals. “No two opals are ever the same,” he says. “Even the same opal looks different during the day or night.” The striking opal ring, shown, is in a gold and diamond setting. The vibrant collection, priced from $5,000 to as much as $140,000, draws heavily on natural themes, including whimsical animal motifs that include beetles, dragonflies, frogs, and turtles, as well as more abstract themes all rendered in an array of colorful gems.  (www.mathon-paris.com)