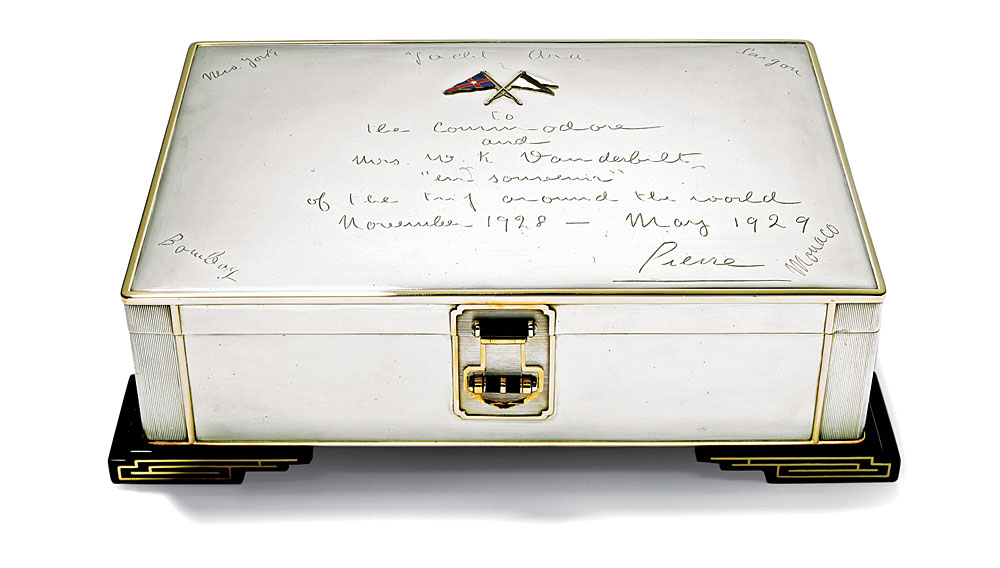 “The surface of American society is covered with a layer of democratic paint,” wrote the French political philosopher and historian Alexis de Tocqueville, “but from time to time one can see the old aristocratic colors breaking through.”

After the author of Democracy in America, perhaps no Frenchman has better understood this peculiar contradiction in the American national character than Pierre Cartier—as this year’s retrospective exhibition marking the 100th anniversary of the jewelry house’s presence in America reminds us. Cartier . . . 100 Years of Passion and Free Spirit in America, which was shown in New York and in Beverly Hills, Calif., in May and June, contains a bounty of objects dating from 1909, when Pierre opened the jewelry house’s Manhattan salon to ease the outbreaks of patrician yearning that mottled the fine, supposedly demotic complexion of the American haute bourgeoisie. He recognized that what these prosperous descendants of 17th- and 18th-century refugees from Europe’s crowned heads most longed for now were crowns of their own to wear, and he set about providing them.

The Astors, of course, figured prominently among those worthies in need of Cartier’s services. With a vast fortune accumulated through fur trapping, tenement housing, and the opium trade, this august clan could afford many a coronet, though only one among their number—Mrs. William Backhouse Astor Jr. (née Caroline Webster Schermerhorn), often referred to in the newspapers as the Queen of Society—donned that appurtenance with any ambition more serious than that of personal decoration. Still, the jewels commissioned by the family were regal: In 1925, for example, Cartier fashioned for Mrs. Vincent Astor, the daughter-in-law of John Jacob IV (who perished aboard the Titanic), several magnificent pieces including a platinum jabot brooch of rubies, emeralds, sapphires, pearls, and diamonds in the shape of a peacock.

The Astors’ archrivals for New York’s social throne, the Vanderbilts, also relied upon Cartier’s artisans to craft jeweled reminders of their exalted station. Although the bulk of the family’s wealth derived from railroads, it originated with Cornelius Vanderbilt, who began his shipping business in 1810 ferrying passengers and freight between Manhattan and Staten Island in a piragua, thus earning himself the nickname “Commodore.” Future generations of the family affected this jesting title with great seriousness, including William K. Vanderbilt II, whose yacht Ara once hosted Pierre. By way of thanks, the jeweler presented him with a silver-and-gold table box (pictured) decorated with onyx and ebonite and engraved with a personal message: “To the Commodore and Mrs. W.K. Vanderbilt, ‘en souvenir’ of the trip around the world, November 1928–May 1929.”

Other Vanderbilt clients of Cartier had loftier aspirations. Mrs. Cornelius Vanderbilt III, whose diamond-sapphire-and-platinum brooch appeared in the exhibition, styled herself “The” Mrs. Vanderbilt following the death of her mother-in-law, though to some contemporaries she was better known as the “Kingfisher”—a less-than-subtle reference to her social pursuit of noble quarry, including King Alfonso XIII and Queen Victoria Eugenia of Spain, Queen Elizabeth and King Albert of Belgium, and the Duke and Duchess of Kent. Naturally, she regarded herself as their equal: Once, after being told by the maître d’ of a Monte Carlo restaurant that her first-choice table was occupied by a Montenegrin prince and her second by a duchess, she explained haughtily to her English companion, “In America I take a rank something like that of your Princess of Wales.”

“Oh?” said the Englishman. “Then who is your queen?”

Of course, many Americans featured in the Cartier anniversary retrospective achieved genuine titles—Wallis Simpson, for instance, as well as Gloria Swanson and Grace Kelly. And ultimately titles were all that some of these women had left: Woolworth heiress Barbara Hutton, for example—an avid Cartier collector who had been, by turns, a baroness, a countess, and a princess—had only a few thousand dollars remaining of her original $50 million when she died in 1979. Ganna Walska, who had been a Russian baroness, sold all of her jewelry by choice in 1971 at Sotheby’s Park Bernet in New York, lending some credence to one of Tocqueville’s least flattering observations: “As one digs deeper into the national character of the Americans, one sees that they have sought the value of everything in this world only in the answer to this single question: how much money will it bring in?”