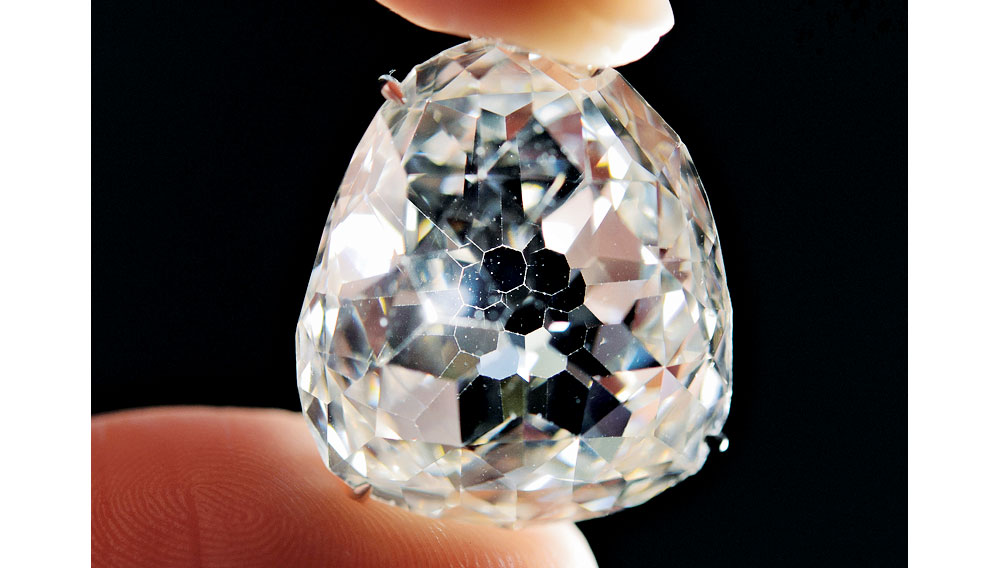 In the lore of famous jewels, these objects of great price are invariably plucked by bandits from the eyes of idols. Such is the case with the 195-carat Black Orlov diamond, which reputedly served as ocular ornamentation for a likeness of the god Brahma. Yet a handful of history’s most alluring gems gained their notoriety from being pried not from the visages of pagan gods but from the Garde Meuble, or French royal treasury, which a Parisian mob stormed in 1792. Among the contents seized were three extraordinary stones: the Regent, Sancy, and French Blue diamonds.

Beneath their gleam, these gems conceal ominous associations. The Regent Dia­mond, for instance, was allegedly discovered in the late 17th century in the Paritala-Kollur mine in Golconda, India, by a slave, who hid his find in a leg wound. The thief escaped to the coast, where he offered an Eng­lish sea captain a share of the spoils in exchange for passage to Bombay; during the voyage, the captain murdered the slave and sold the diamond to a merchant. But the seaman’s newfound prosperity was short-lived: After frittering away his ill-gotten gains, he hanged himself. The stone was then acquired by Thomas Pitt, the governor of Madras, who proffered the prize to numerous crowned heads, including Louis XIV of France. The Sun King declined, but his nephew, Philippe II, Duke of Orléans, who served as regent after the monarch’s death in 1715, offered Pitt £135,000; thus the diamond acquired its name.

Also of Indian origin, the pale-yellow Sancy Diamond (pictured) is believed by some to have belonged to the dukes of Burgundy before it passed into the possession of the Portuguese throne. When Henry the Cardinal-King died without an heir, one of the claimants, the prior of Crato, absconded with Portugal’s crown jewels. He sold the 55.23-carat stone to the seigneur de Sancy, Nicolas de Harlay, and used the proceeds to finance his futile claim: Though he ruled for 20 days as António I, the prior ended his days in poverty and exile.

As minister of finance to King Henry IV, Sancy followed the cleric’s example, hawking the stone to James I of England to raise money for the French army. According to one tale, thieves intercepted the courier entrusted to deliver the jewel and slew him; however, to Sancy’s relief, the diamond was later found in the stomach of his servant, who had swallowed it. The perennial bargaining chip, this treasure made its way back to France at the behest of Charles I, who pawned it in 1644 to prop up his tottering monarchy during the English Civil War. This investment was not a sound one: In 1649, the deposed king was beheaded in Whitehall.

The last and, reportedly, most accursed in this trio of royal trophies was the French Blue Diamond, a 67.125-carat stone that was later recut to a weight of 45.52 carats and renamed the Hope Diamond, after London banker Henry Philip Hope, whose family owned it for more than 50 years. Reputedly purloined from a statue of the goddess Sita, this bedeviled bijou made its first appearance in the 17th century, when French trader Jean-Baptiste Tavernier sold it to Louis XIV, who commissioned his court jeweler to fashion it into a jewel to wear on state occasions. The blue-gray stone, which fell into the hands of many individuals—including George IV of Britain, Pierre Car­tier, and American socialite Evalyn Walsh McLean—is thought to have left in its wake a trail of suicide, assassination, insanity, imprisonment, and financial ruin. Worse, according to legend, the jewel even caused its first owner, Tavernier, to be torn apart by wolves near Constantinople.

Yet in truth, this most malevolent of stones may in fact be the least menacing. Records show that Tavernier actually died of natural causes at the age of 84; McLean, who died of pneumonia at age 60, though her life had its share of misfortunes, always insisted that the diamond brought her luck; and, Marie Antoinette, one of the jewel’s most infamous victims, never actually wore it. Indeed, perhaps the only genuine tragedy connected with the stone was its absence from the cache that authorities discovered in a garret in Les Halles some months after the looting of 1792. There, hidden beneath a roof timber, were nestled the Regent and Sancy diamonds; but the French Blue did not resurface until the 1830s, when, in London, it assumed its current and even more dazzling incarnation.

Correction: In the October 2012 issue’s story on cruise ships (“Sea Change”), the contact information for Hapag-Lloyd’s MS Europa 2 should have been listed as 800.782.3924, www.hl-cruises.com.