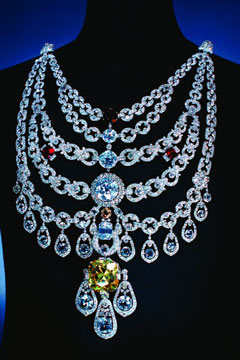 In the 1920s, Maharaja Sir Bhupindra Singh asked Louis Joseph Cartier to set some loose gems into a showstopping piece of jewelry. The maharaja was not disappointed. The necklace, completed in 1928 and called the Patiala after the region of India that he ruled, includes five Art Deco–style platinum chains that once contained 2,930 diamonds totaling almost 1,000 carats. At its heart was the 234-carat De Beers Diamond, the seventh-largest diamond in the world.

After Singh died in 1938, the necklace eventually slid into obscurity. It might have vanished altogether were it not for the efforts of Eric Nussbaum, a Swiss-born gemologist whom Cartier has entrusted with finding and collecting notable pieces of jewelry made during the house’s more than 150-year history. When Nussbaum located the necklace in London in 1998, it was partially broken and bereft of many of its spectacular stones, so he took the unusual step of having synthetic stand-ins made.

Meanwhile, Nussbaum continues to doggedly search for suitable natural gems for the necklace. “I’m very confident that one day it will be exactly as it was in 1928,” he says. “This is my aim.”