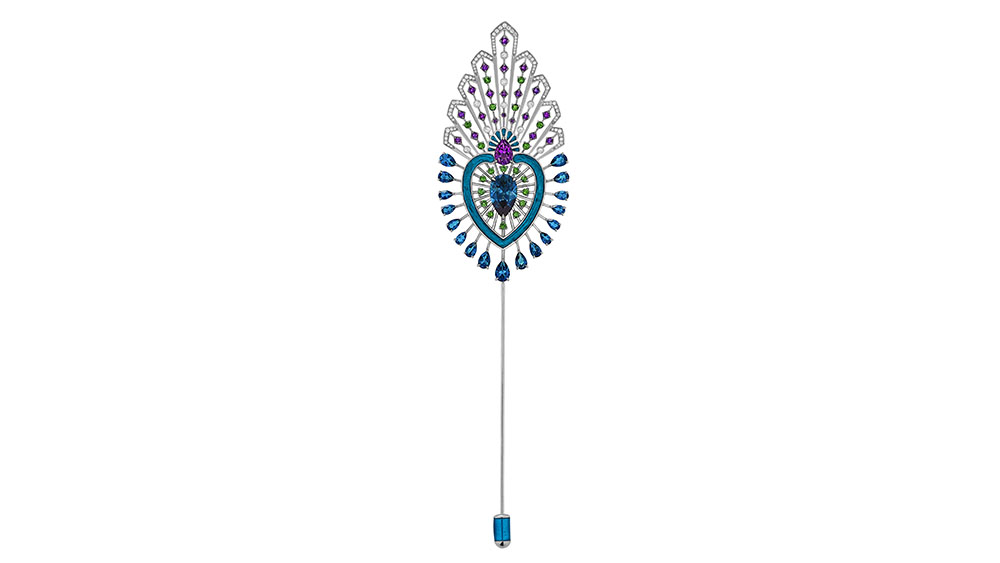 Queen Elizabeth II will be celebrating her Platinum Jubilee with four days of events next month, but the British jeweler Garrard is getting the festivities started a little bit early.

Garrard has created a limited-edition pin and pendant honoring the monarch’s 70 years on the throne. The Jubilee pin features the jeweler’s iconic Sovereign motif around a 4.9-carat London Blue topaz. Resembling a peacock feather, the piece can pull triple duty as a lapel pin, a hair jewel or a hat accessory, according to Garrard. The Royal Blue Aloria enamel pendant showcases a similar deep blue on one side and white diamonds on the other.

“The clean curves and simplicity of design draw the eye to the rich, bold color that we are all so excited about,” Sara Prentice, Garrard’s creative director, said in a statement.

The jeweler has a long history with the British royal family. Founded in 1735 by the silversmith George Wicks, Garrard was tapped for a royal commission by Frederick, Prince of Wales, the very same year. In 1843, it become the first ever official crown jeweler, and its notable designs include everything from Queen Mary’s consort crown to Princess Diana’s engagement ring. More recently, in 2018, on the occasion of Queen Elizabeth’s 65th coronation anniversary, the jeweler unveiled the massive 118-carat Jubilee Sapphire brooch.

As for the newest pieces, the Sovereign motif found in both the one-of-a-kind pin and the enamel pendant actually dates back to 1910. Its creation was inspired by the legendary 530-carat Cullinan I diamond, which was added to the Sovereign’s Scepter that year. Now the motif has been reimagined for the modern era in both a striking and subtle way.

“For the Jubilee, I wanted to create jewels that celebrated our incredible royal history and design,” Prentice said.

Mission accomplished. Both the new pin and pendant will be available to buy online starting May 16. The pin, of which there is only one, is listed at $17,000. The pendant, with only two available, is going for $5,500.