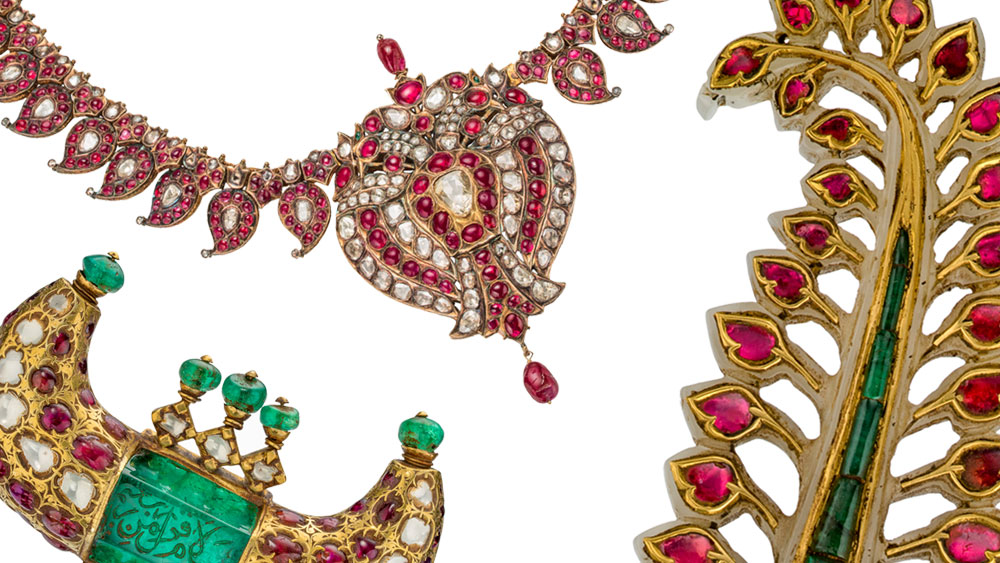 This week, the Gemological Institute of America unveiled Centuries of Opulence: Jewels of India, a historic exhibition of Indian jewelry with designs dating back to the 17th century. Each piece highlights celebrated Indian design traditions—from intricately detailed metalwork to distinctively colorful mosaics made with rubies, diamonds, and emeralds. The exhibition also explains the religious and cultural symbolism imbued in each design and touches on the historic tradition of gemology in India.

All 50 pieces on view are part of a private collection, and each offers insight into India’s intense history—touching on cultural rituals, legendary royal families, and fallen empires.

Though all the pieces are stunning, there are a few standouts. The first is a 22-karat-gold 18th-century Mughal Horn pendant, featuring a 125-carat Colombian emerald engraved in Arabic with salutations of peace—originally made for a ruler of the Kingdom of Mysore in southern India. Another is the Royal Manga Mala necklace, adorned with mango-shaped gems and a pendant symbolizing the mythical two-headed bird gandaberunda—an emblem of Mysore’s Wadiyar royal family. Last is an 18th-century Mughal Jade Turban Ornament, one of the few known examples to have been fashioned from white jade once believed to ward off heart disease and high blood pressure.

The exhibition is at the GIA’s global headquarters in Carlsbad, Calif., and will be open to the public until March 2018.

Mughal Horn Pendant from the 18th century. Made with 22-karat gold and originally fashioned for a ruler of the Kingdom of Mysore in southern India  Photo: Courtesy Robert Weldon