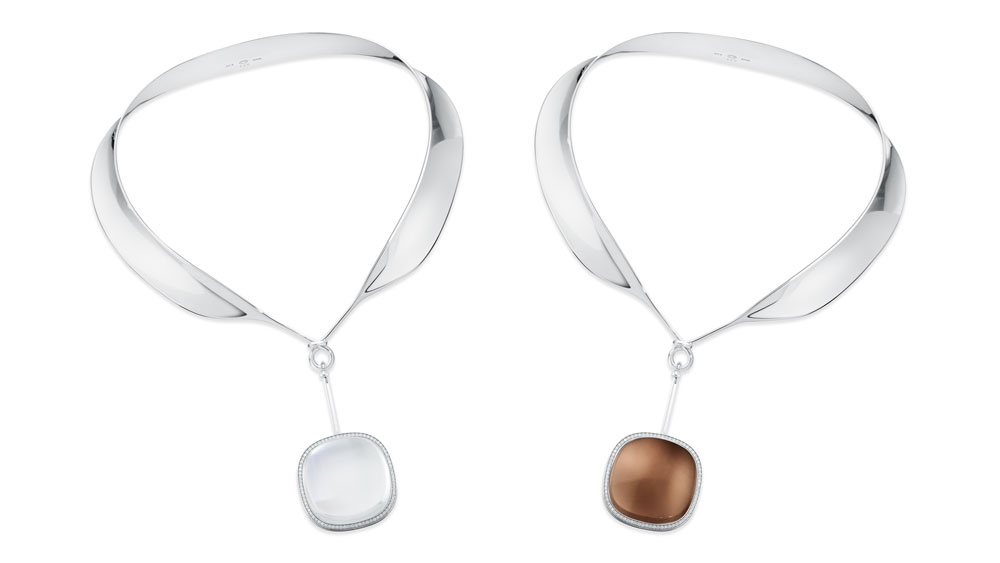 To mark the 50th anniversary of Georg Jensen’s collaboration with legendary silver sculptor and master jeweler Vivianna Torun Bülow-Hübe, the 113-year-old Danish brand has unveiled two sleek new limited-edition necklaces. Each is inspired by models from the watch and jewelry brand’s archives and boast strands of hand-woven silver—this woven technique is one that Torun (as she is commonly known) often incorporated into her Art Nouveau-inspired creations for Georg Jensen.

After attending Stockholm’s Academy of Industrial Arts in 1945, Torun immersed herself in Paris’ art scene alongside Matisse and Picasso and built a reputation as a forward-thinking designer, experimenting with refreshing, minimalist jewelry concepts. She began collaborating with Jensen in 1967, at a time when jewelry was undergoing a transformation; designs were moving away from ultra-decorative details towards more sculptural pieces that complemented (not just adorned) the human form.

“A piece of jewelery should be a symbol of love,” Torun is quoted as saying. “It should move with the body so that it blends with you. It must not overwhelm, but enhance you. This is why it must be timeless. It shouldn’t matter if you are 17 or 87 years old.” Billie Holiday, Brigitte Bardot, Ingrid Bergman, and Sweden’s royal family were just a few of Torun’s devoted fans.

In honor of the brand’s partnership with Torun, which spanned four decades until her death in 2004, the jewelry house has debuted a new pair of necklaces featuring chic neck rings, each strung with a sumptuous pendant—one in sterling silver framing a radiant rock crystal, another featuring a smoky quartz (priced at $2,975 for each pendant, $850 for each neck ring). The necklaces will be on display in Georg Jensen’s Madison Avenue boutique in New York City through the holiday season.

Among Torun’s most iconic designs for Danish brand is the open-ended Vivianna bangle watch, a sleek, mirror-faced timepiece without numbers or a second hand—symbolic of Torun’s belief that watches should liberate the wearer from the march of time, not shackle them to it. “Perhaps it is possible to make a timepiece which more intensely perceives the here and now,” Torun said of the Vivianna design. “The watch is open ended to symbolize that time should not bind us. And the dial, like a mirror, reminds us that life is now.”

Various examples of Torun’s work, including the Vivianna bangle watch and other signature designs are on permanent display at the boutique, but archival pieces will only be available to view until October 2nd.