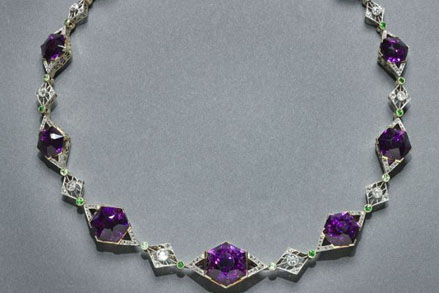 At the end of the Gilded Age, Peter Carl Fabergé, Louis Comfort Tiffany, and René Lalique were among the most coveted artisans of the era, imbuing their design influence into an array of luxury pieces from jewelry to lighting to object d’art.  Their magnificent work, including many famous pieces made for the 1900 Paris World’s Fair, are the subject of “Artistic Luxury: Fabergé, Tiffany, Lalique,” a new exhibition at the Cleveland Museum of Art from October 19, 2008, to January 18, 2009.

“Fabergé, Tiffany, and Lalique were the first to market themselves as ‘artists’ and not just mere jewelers or craftsmen,” said Stephen Harrison, the museum’s curator of decorative art and design. “They hoped that by association their work would be considered on the same level of artistic achievement as painting and sculpture.” The exhibition features more than 300 objects from private lenders and public institutions worldwide including the House of Fabergé Siberian amethyst, diamond, and demantoid garnet necklace (shown), circa 1895-1900, from the collection of jeweler Neil Lane; a rare Imperial Blue Serpent Egg by Fabergé, on loan from His Serene Highness Prince Albert II of Monaco; and the rediscovered magnolia stained-glass window created by Tiffany for the 1900 Paris world’s fair, which was sold to a Russian institution in 1901 and never before seen in the United States. In addition to works by the three legendary brands are many pieces by their competitors during the period, including Cartier, Gorham, and Boucheron. (888.CMA.0033, www.ClevelandArt.org)