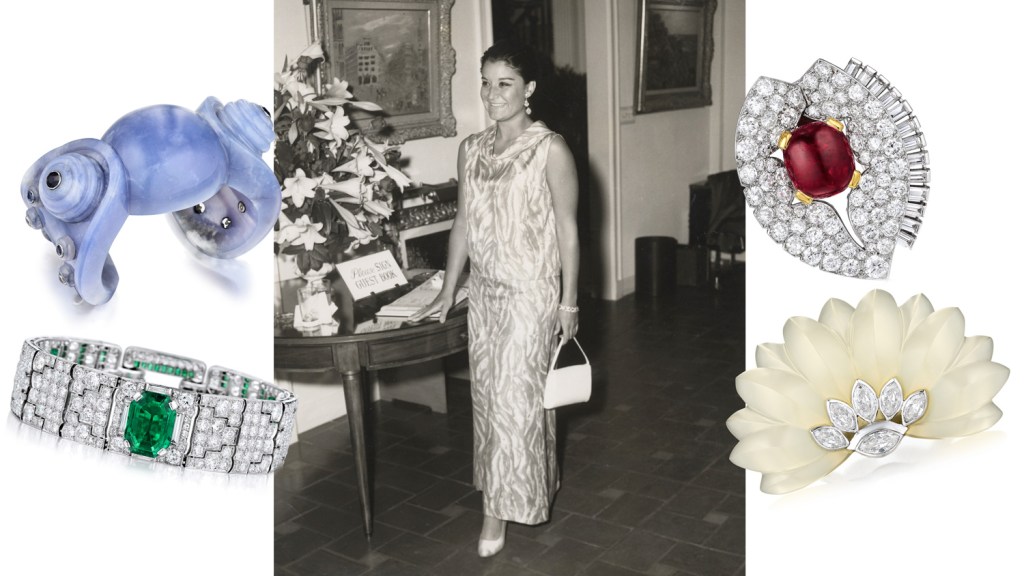 A world traveler, a writer, a devoted spiritual seeker—Bokara “Bo” Legendre’s numerous interests shine through in her jewelry, which is being offered for sale on April 25 through New York-based auction house Fortuna. The 68-lot collection includes rare designs that Legendre, who passed away last winter, collected or was given by her mother, socialite Gertrude Legendre.

Named after the ancient city of Bukara in Uzbekistan, Bo was an accomplished journalist, a practicing Buddhist ordained in the Himalayan country of Sikkim, and a revered teacher of meditation. “My understanding of her was that, in many ways, she was not a materialistic person,” says Seth Holehouse, co-CEO and head of jewelry at Fortuna. “As she aged, she also became deeply involved in spirituality. I feel like the collection speaks very strongly of her life.”

The designs provide a snapshot of Legendre’s varied interests as well as the contrasting aesthetics of the 20th and 21st centuries. The sale catalog reads like a wish list of iconic jewelry-makers—from Suzanne Belperron and Jean Schlumberger to David Webb, Cartier and Bulgari—but, in addition to Victorian and Art Deco-inspired jewels made in the U.S. and Europe, Legendre’s passionate interest in Eastern cultures is expressed through a range of colorful 22-karat gold jewels from India.

We spoke with Holehouse about some of the standout pieces in this unique sale—including the one he thinks is “magical.”

The Most Surprising Piece

“The Suzanne Belperron chalcedony cuff, to me, was the biggest surprise. Because normally, when Suzanne Belperron comes to market, it’s a ring or a pair of earrings or a brooch, but her carvings and the lapidary work of her stones is what she was very famous for. This carved cuff is so iconic because it was done in the 1930s, when there was this really strong Art Deco movement—you had the houses like and Cartier doing lots of Art Deco looking jewelry that was very geometric with lots of diamonds and colored stones—and then you had Ms. Suzanne Belperron on the far opposite side of design making these super organic and sensual shapes that were made to wrap around the client’s bodies or finger. I would definitely say that her pieces are the most surprising for a lot of different reasons.”

“I have to look back and say, ‘What piece have I been drawn to? Is there a piece of jewelry I keep just staring at?’ And it’s actually one of Suzanne Belperron’s pieces, lot 60, the little diamond clip. It looks like a carved fan and has almost a floral, Asian look to it. I keep being drawn to it because it has this magical feel to it. The way it reflects the light, it almost glows. It was kind of cheesy, but I was telling someone the other day, that felt like one of those things that you’d see in Lord of the Rings that when you wore it it’d make you invisible or something. It has this magical, otherworldly kind of glow.  It’s my single favorite piece in the sale.”

The Best Value Buy in This Collection

“In our research we discovered that many pieces in this collection were handed down to (Bo) from her mother, Gertrude Legendre, and her aunt. A lot of these pieces, like the Art Deco Cartier pieces, I can picture Bo’s aunt or her mother wearing to an evening party or something in the 1930s. I often like to imagine that Bo herself was more drawn to the Suzanne Belperron pieces for their organic form, seeing as she was fascinated by art and different cultures. What this collection really exemplifies is a focus on fine period jewelry, and jewelry that has been touched by the hands of the great designers.”

The Designs That Will Get Top Dollar

“The Belperron Cambodian Cuff and the Cartier emerald bracelet are the two highest estimated pieces and will probably be the two top pieces and prices. Another, which is a little bit of a sleeper, is the necklace, bracelet, and earrings set by Jean Schlumberger, from before he worked for Tiffany & Co. It’s even more rare than a lot of the Tiffany (designs), because it was before he became globally recognized as a jewelry designer. A lot of collectors will view that set as something very, very special.”