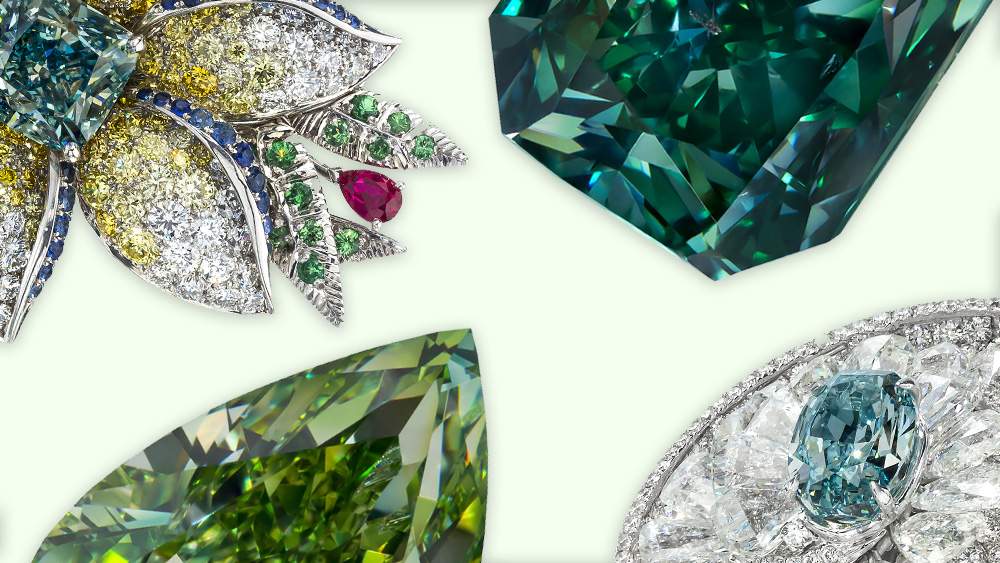 This month, the Natural History Museum of Los Angeles County unveiled Green Diamonds: Natural Radiance, a special exhibition that spotlights 60 of the planet’s most incredible loose and mounted green diamonds. Located in the museum’s Gem and Mineral Hall, the gems are part of the Gamma Collection, which was amassed over two decades by David Shara, founder of New York–based firm Optimum Diamonds. “I focus on the diamonds that have the absolute highest levels of color,” explains Shara, “the most extraordinary Jolly Rancher–type colors. And that’s really the focus of this collection.” The Gamma Collection—named after the type of natural radiation that gives the diamond its vibrant hue—will be on view through April of next year and highlights rough gems as well as finished pieces, including a few one-of-a-kind, nautilus-shell-inspired pieces by L.A.-based designer Arun Bohra of Arunashi.

To get a better understanding of the gems in this exhibit, we asked Shara to break down some green diamond details for us.

What kind of green diamonds are the most coveted?

The vivids are the highest level of color and are extraordinarily rare.

There are approximately 300 pure vivid green diamonds in the world that are above one carat.

When you get above three carats, there are 10 or less in the world.

The largest in the world is a 5.03-carat fancy vivid green diamond known as the Aurora Green. It sold at auction at Christie’s. It was bought by Chow Tai Fook for $16.8 million, so $3.5 million per carat.

What are some of the must-see stones in the Gamma Collection?

What gives green diamonds their color?

At some point in their formation, they sat next to some radioactive source: uranium, thorium, something that is producing different types of radiation—and, in particular, gamma rays. Gamma rays are the strongest of all—more than X-rays, ultraviolet rays, visible light, and infrared. Gamma rays are by far the most powerful and the most dangerous to humans, as well. Diamonds are billions of trillions of carbon atoms in sheets, and these gamma rays are able to knock individual carbon atoms out of the crystal lattice of a diamond. When a gamma ray comes in at the right angle and with the right power, it’s able to knock those carbon atoms out of place, which creates a hole or a deficiency. Those deficiencies act as light traps. They’re able to capture more of the blue and red lights, and then they allow for more of the green to come through. The more light traps there are, the greener the diamond becomes.

How can someone tell the difference between an emerald and a green diamond?

The best green diamonds have saturation similar to a top emerald, but it has all the sparkle and fire of the finest white diamonds. You see all the colors of the rainbow.

When it comes to cutting and designing, what kinds of unique challenges do green diamonds present?

If you polish green diamonds with too much friction, too much heat, those holes fill back in, and the color goes away and it will never come back. It’s terrible. Once the color is gone, it’s gone forever.

They are also the most temperamental, most difficult of all the gemstones to cut. Diamond is so hard to cut in the first place, and when you cut a green diamond, you’re cutting diamond with diamond, so you’re generating enormous amounts of heat, pressure, and vibration on the stone—none of which are helpful to maintaining color. It’s a very, very difficult thing to do.

What gems do you think pair best with green diamonds?

I happen to love them with white diamonds in classical settings. And I love them paired with Argyle pink diamonds. Some of the really saturated greens, they do very well with red diamonds, as well.

Where do green diamonds come from?

There’s no rhyme or reason to it. Green diamonds are found in all of the mines in the world. Wherever you find white diamonds, occasionally you find a green diamond, too. While there’s no one set area of radioactivity, a lot of them are found in Brazil and Venezuela. But we don’t know if they are produced on the surface or 200 miles below the surface a billion years ago. It’s a real mystery.