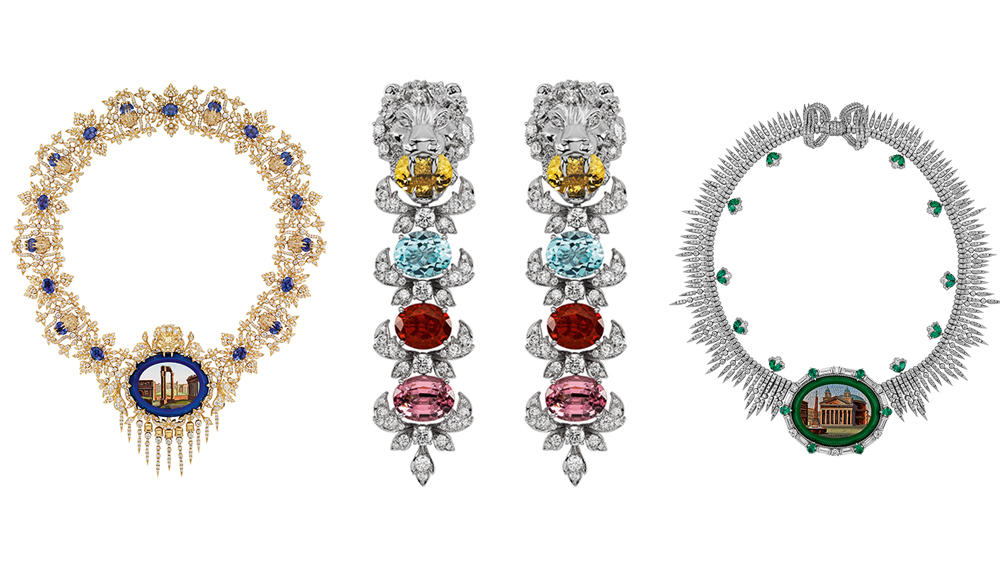 Back in 2019, Gucci debuted its first-ever high jewelry collection. Dubbed Hortus Deliciarum, it explored themes of the animal kingdom and luxury. Now the label is dropping the third installment of the dazzling line.

Designed by creative director Alessandro Michele, the new rings, necklaces, earrings and more are divided into five themes that evoke an “imaginary Grand Tour” through the world of jewelry, according to Gucci. Starting with designs influenced by the mid 19th century and continuing to the 1970s, the drop takes you on a sparkling journey via pink tourmalines, blue topaz and colorful cascading diamonds.

Michele’s clothing and jewelry creations alike are known for storytelling, and the first theme of the collection remains true to that legacy by referencing the real Grand Tour—the 19th-century rite of passage in which which young men of means toured Europe with a chaperone once they turned 21. Michele worked with a set of micro mosaics, made between 1850 and 1870, to reference the rite’s timeframe. And because Italy was an often a key destination for the journey, the set depicts iconic structures like the Colosseum, Piazza San Pietro, the Pantheon, the Roman Forum, the Temple of Vesta, the Temple of Hercules, the waterfalls at Tivoli and the Pyramid of Cestius.

Colorful earrings and a ring from the Grand Tour-inspired collection.  Gucci

For the second theme, Gucci plays up “kaleidoscopic beauty,” which highlights travel between Rome and the India of Maharaja. Based on the royal palaces and lush gardens found in both settings, as well as colorful silks, the theme introduces you to the “red stones of light,” also known as rubellite, imperial topaz, yellow beryl, tourmaline and garnet. The jewels take the form of solitaire rings with pear- or heart-cut stones, multi-stranded necklaces and bracelets with large stones of yellow beryl.

Pearls are the foundation of the third theme. As “the first among precious things,” according to Roman author Pliny the Elder, pearls are known for their symbolism of femininity and mythological origins, which inspired this theme. The set features white, cream and black pearls that were combined to create sautoirs paired with striking earrings and brooches. Then, Michelle uses the fourth theme to evoke the New World in the 1930s and ’40s, creating necklaces and bracelets with geometric shapes in chains with asymmetrical and flexible modules topped opulent stones—think aquamarine and blue-grey beryl—for drama.

A statement-making necklace and earrings sets with blue topaz from the drop.  Gucci

The final theme brings us to 1970s with subtle references to pop culture, free self-expression and the desire to discover new worlds. The pieces from this theme are meant to “protect” ideas, visions and stories. They showcase psychedelic colors on necklaces with white-gold chains, diamonds holding real talismans in hexagonal emerald and aquamarine set in a green enamel frame that encloses baguette-cut diamonds. The theme also includes a stunning pendant with a yellow gold base that’s based on the 1969 “Savana” foulard Vittorio Accornero De Testa designed for Gucci.

For more information on the new Hortus Deliciarum drop, and its fantastical journey, visit the fashion house’s website.