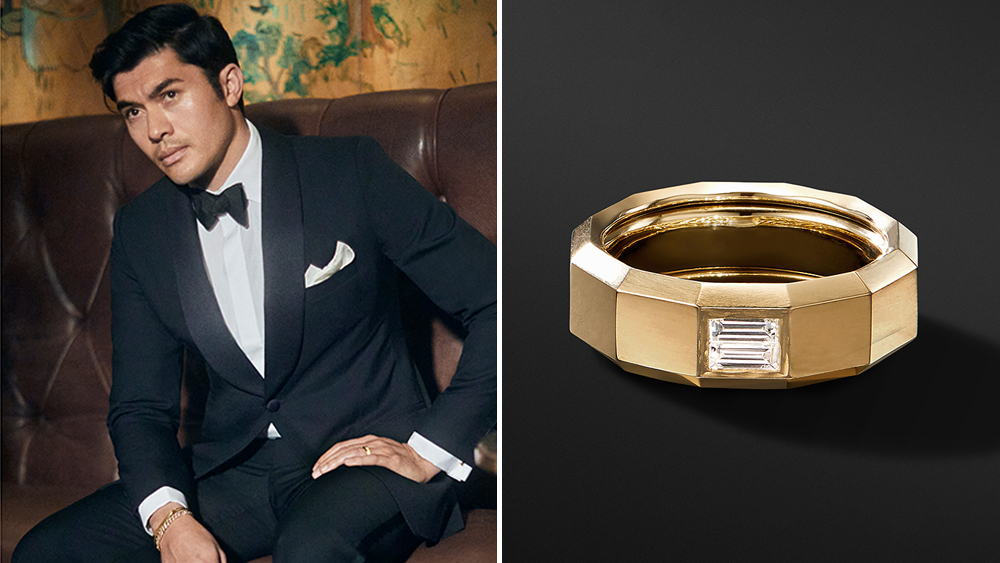 David Yurman and Henry Golding are back once again with some decidedly lavish bling for the holidays.

In February, the luxury jeweler unveiled its Come Closer campaign with the Malaysian-British actor starring as its first male celebrity brand ambassador. Golding continues to shine bright in the recently launched Holiday 2022 campaign, showcasing the latest men’s styles in an artful homage to NYC.

In the images, the debonair Crazy Rich Asians star is dripping with an assortment of luxe rings and bracelets from Yurman’s new gold and diamond designs for men. You’ll also spot the murals of the iconic Carlyle Hotel in the background, which served as the key inspiration for the campaign. On a Zoom call with Robb Report, Golding tells us which pieces from the shoot were his favorite.

“Probably the gold deco link necklace, and a bracelet,” he states. “It’s so iconically New York, it kind of draws from that inspiration of the architecture of the that Art Deco period. They’re pieces that I wear casually, as well as at more sort of upscale kind of events. And they match really well.”

The Heirloom chain link bracelet the actor referred to comes in 18-karat yellow gold, rose gold and sterling silver, with a price tag of between $9,500 and $9,800. Golding also sports an 18-karat yellow-gold curb chain bracelet with pave diamonds that will set you back between $17,500 and $18,000.

The joy of living was another inspiration for the new campaign. As a father, husband and actor, Golding has had plenty of precious moments of his own. “We just came back from this amazing family holiday,” the actor recalls. “The past four months have probably been some of the most amazing times that I’ve had.” Festive times call for festive bling, of course.

Other interesting pieces from the collection include an 18-karat yellow-gold faceted band ring with a striking center diamond, as well as a pair of chic cable cufflinks and a streamlined signet ring with black titanium details. Another highlight is the Petrvs Horse signet ring in 18-karat yellow gold, which features a beautiful bloodstone and an engraved horse inspired by ancient coins and stone carvings.

Golding outwardly expresses his love of jewelry throughout our talk, but the actor’s Instagram shows he’s also a watch guy. Like any good collector, he knows how to balance his bling, though.

“I’m a stacker but I keep the hard materials separate,” he explains. “So, if I’m stacking, I’ll use bracelets that have more kind of leathers or sort of threads to them—if they’re bracelets on the arms that I’m using a watch, let’s say. And then on the other arm, I’ll use like the precious metals and things that rub, just so I’m conscious about my watches.”

Though dressed for formal occasions throughout the campaign, the actor intends to spend the holidays at home with family in much more casual attire. “I just had this conversation with my wife,” he says. “I was like, ‘hey, can we just stay at home and have people over to the house.'”

Nobody says you can’t rock gold and diamonds in your own abode.