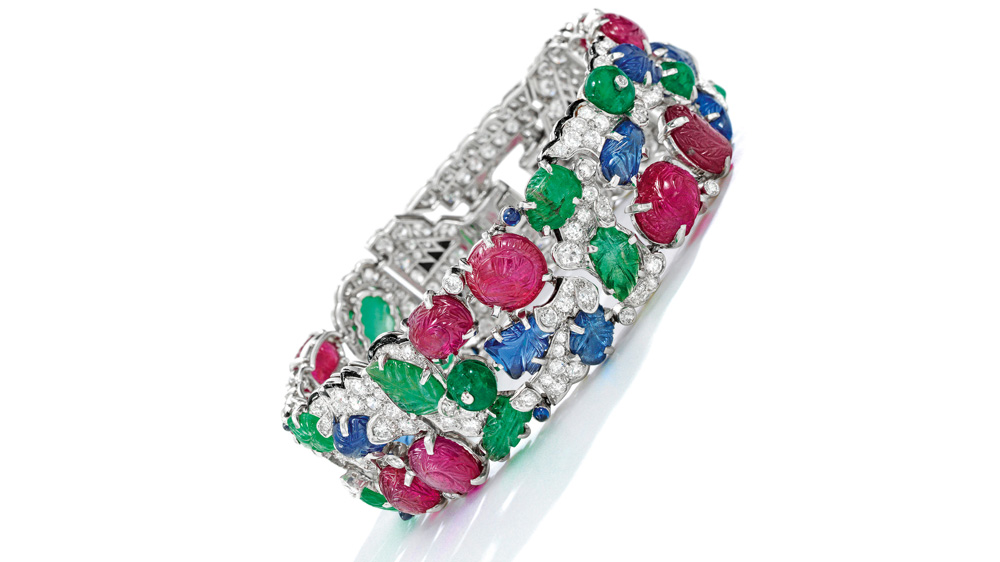 Collectors on the hunt for vintage gems by Van Cleef & Arpels, Cartier and other high-wattage jewelers typically look forward to the second half of April, when auction houses traditionally curate sales of pieces worthy of being called “magnificent” or “important.” But auction houses now rank high among the luxury-focused businesses that must rethink their strategies amid stay-at-home orders that have significantly impacted spring schedules.

Christie’s “Magnificent Jewels” sale, originally slated for April 22, tentatively has been moved to June 11, though Christie’s spokesperson Erin McAndrew notes that the date could change again, depending upon the status of public events in New York City. “After Christie’s offices across the U.S. were voluntarily closed as a precautionary measure on March 13, Christie’s undertook a full global review of its auction calendar in light of the evolving Covid-19 situation,” she says. “While we wish to offer as much guidance as early as possible on proposed auction dates, we do so with the understanding that Christie’s will continue to adapt its activities as necessary and take all precautions to protect our staff, clients and the larger community.”

At Sotheby’s, the “Magnificent Jewels” New York sale originally scheduled for April 21 has been moved to June 9, while its “Magnificent Jewels and Noble Jewels” sale planned for Geneva in May likewise has been delayed to June 30. “At the moment, given the government directives, our focus is on holding online-only sales, migrating live sales into online-only sales when appropriate, or postponing them to a later date, based on what makes sense for each sale and location,” says David Bennett, worldwide chairman of Sotheby’s jewelry division.

Sotheby’s also has added two unique online events to its calendar: A single-lot sale of an iconic 1930s Cartier Tutti Frutti bracelet of carved emeralds, rubies and sapphires has been set for April 24-28 and carries an auction estimate of $600,000 to $800,000, while an “Italian Glamour” selection of jewels by Bulgari and Marina B will take place May 6-12. “As we look forward to welcoming jewelry lovers back to our salesrooms and exhibitions, we are excited to push ahead with innovative formats in the coming months,” Bennett added in a statement announcing the latest changes to the house’s schedule.

Doyle initially planned to continue with its April 23 “Important Jewelry” sale as an online-only event, but recently postponed that event to June 10. Doyle also will host two jewelry sales in May, with both the mix and number of lots adjusted to reflect how high-end auctions are evolving as stay-at-home orders continue. “We are embracing our ability to be nimble,” says vice chairman and CEO Laura Doyle. “Both the buyers and sellers are there, but one of the things we’ve found is that an online sale of 500 lots is a long day for a collector to spend at his or her computer. So we’re curating our events into smaller sales, adjusting the rules to meet the strong demand from sellers and buyers.”

Among the biggest changes for these major sales, of course, is that auction houses have been unable to host splashy public previews or private one-on-one appointments with valued clients. “I’ve been really inspired by the innovation and creativity of our team and how quickly everyone has adapted to the circumstances,” Doyle says. “Certain gemstones really do need to be seen to be genuinely appreciated, so we’ve been working with higher-resolution images, and also doing things like Facetiming and Zoom meetings with clients, talking them through pieces that are of interest. That personal connection is more important than ever, so getting on the phone or interacting with clients via video conference reestablishes that comfort level.”

When Doyle’s “Important Jewels” sale kicks off on June 10, which pieces might draw the most interest? Laura Doyle points to a pair of detachable-pendant earrings featuring South Sea cultured pearls and fancy intense yellow diamonds totaling roughly 18.50 carats, edged in white diamonds and set in platinum and gold, which carry an auction estimate of $150,000 to $250,000, as well as a David Webb bracelet crafted of fluted azurmalachite on 18-karat yellow gold, accented with rubies and platinum-set diamonds. That piece is estimated to fetch between $25,000 and $35,000. “I love that bracelet, both for the color combination and because it’s just really happy,” she says. “That’s the type of piece that brings joy, and people will be looking for things that feel unique and special. And I’ll be interested to see what the fancy vivid diamond earrings bring; that market has been a little quieter, and people’s perception and taste tends to vary more widely in colored stones.”

Adjustments in the Sotheby’s schedule, meanwhile, are partly a reflection of the recent increase of online bidders, Bennett says. “The results of the two online-only jewelry sales held [in March] are promising indeed,” he says. “The sales attracted participants from more than 30 countries around the world, with 20 percent of the bidders completely new to Sotheby’s.” Within those two sales, 93 percent of the lots sold, with 56 percent of them achieving prices above their pre-sale high estimate, he adds.

Highlights of the June 9 “Magnificent Jewels” sale at Sotheby’s include a ring showcasing a 3.67-carat fancy intense blue diamond flanked by white diamonds, which carries an auction estimate of $2.5 million to $3.5 million. For fans of historic jewels, a 280-lot “Paris Joaillerie” sale, originally taking place April 1 and now set for June 10 at Sotheby’s Paris, includes designs by Mellerio, the legendary Rue de la Paix house that was founded in 1613 and crafted pieces for Marie Antoinette and Queen Victoria. “It’s difficult to choose among the Mellerio pieces—I am passionate about antique jewels, so I would say Lot 145, a diamond and aquamarine necklace created at the end of the 19th century. The design is pure and timeless,” Bennett says when asked about pieces that might draw intense bidding. “The top lot in the Mellerio selection, Lot 169, is also remarkable: The 1977 gold and emerald necklace features a 19.76-carat drop-shaped cabochon emerald, which was very likely set in the 19th century. It’s a striking piece, with a very innovative and balanced design.”

While Christie’s makes adjustments to its “Magnificent Jewels” sale, the house also is pointing clients to viewing rooms on the Private Sales section of its site. Current private-sale pieces include a stunning Serpenti secret watch and bracelet by Bulgari, crafted in turquoise, emeralds and diamonds on 18-karat yellow gold. “That’s such a striking, iconic piece, a true prize when people are looking for a Bulgari Serpenti,” says Daphne Lingon, head of jewelry for Christie’s Americas, which also has ramped up its online strategy, including two online jewelry sales: the first closes on April 24, while the second will take place April 28 through May 8. “We’ve heard from clients that they’re interested in still looking at sales and acquiring pieces for their collections. That played a big role in our decision to move forward with the online sale, which has been put together very thoughtfully,” Lingon adds.

An online jewelry event is nothing new for Christie’s, which became adept with the platform in 2011 with the legendary Elizabeth Taylor estate sale. “There were the major pieces offered in the live sale, but we also needed a way to engage an audience with the hundreds of other pieces in her collection,” Lingon explains. “That kind of engagement ultimately became significant for us and proved it had a value for offering jewelry at a certain price point.”

Lots in Christie’s “Magnificent Jewels” auction will be available for viewing online roughly three weeks prior to that sale’s confirmed date, while private clients typically receive a catalog two to three weeks in advance of the event. Lingon is confident collectors won’t be disappointed when that sale happens. “We’ll have some impressive colored stones, including a ring featuring a 52.48-carat sapphire that is estimated to go for $500,000 to $700,000, and we’ll also have the largest colorless pear-shaped diamond ever to be offered in the United States: a 115.83-carat stone, very simply set as a pendant, with an estimate of $5 million to $7 million,” she says. “We also have some beautiful earrings from JAR, a really nice group of property, and we find that collectors can be very passionate about JAR pieces.” Among the pieces designed by the famously reclusive Joel Arthur Rosenthal in his Paris atelier is a pair of moonstone, sapphire and diamond earrings, as well as a pair of brooches crafted of colored sapphires, spinels, and both white and colored diamonds. Each lot is expected to sell for between $150,000 and $250,000.

While questions about the economy continue to dominate conversations in the wake of businesses closed to the public, auction experts believe the jewelry market should not only remain solid, but also may see an increase of both sales and interest in the coming weeks and months. “We’ve seen this over the years in other situations when clients want to buy jewelry as a different asset class,” Lingon says. “So it hasn’t been a surprise that clients are reaching out to ask about both upcoming sales and private sales. Amid everything that’s going on, it’s definitely been a bright spot to have that kind of feedback.”