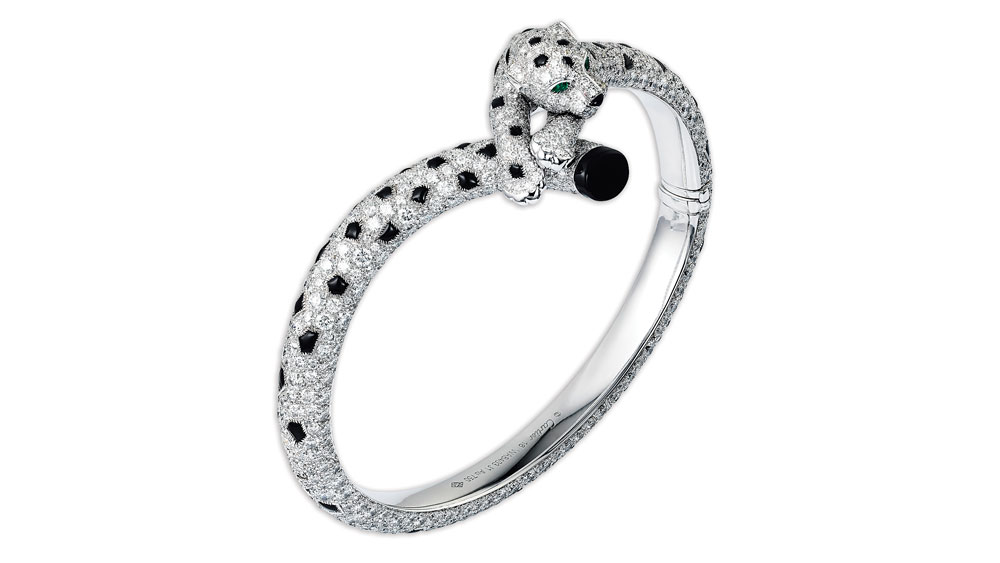 Cartier’s director of jewelry, Jeanne Toussaint, was nicknamed “La Panthère”—an affectionate tribute to her bold, independent spirit and well-known fetish for felines. An influential figure in the fashionable and artistic circles of 20th-century Paris, Toussaint embraced the big cat in all matters relating to style, from her animal-skin coats and accessories to the panther carpets that adorned the floors of her apartment. Fascinated by her mystique, Louis Cartier persuaded her to join his family’s jewelry house in the 1920s, and she thereafter played an instrumental role in making Panthère de Cartier one of the most lasting and recognizable collections in the world. She introduced the slinky cat motif to watches, vanity cases, and other accessories, but her most memorable creations were the dazzling jeweled panthers she envisioned for such society doyennes as the Duchess of Windsor, Daisy Fellowes, and Barbara Hutton.

Cartier’s elegant cat conceit has endured for more than a century, in part because it has continued to evolve and because every piece is a serious artistic expression. Artisans painstakingly sculpt each example in wax, cast the ornament in gold or platinum, and then set it with thousands of hand-cut gemstones carefully positioned to suggest movement and life.

“The panther remains an iconic, desirable design,” says Christie’s international head of jewelry, Rahul Kadakia. “Cartier created it and made it their own. Others have made panthers, but you wouldn’t buy one elsewhere, just like you wouldn’t buy a Kelly bag anywhere but Hermès.”

In 2014, which marked the 100th anniversary of Cartier’s first panther, the house issued contemporary interpretations of its eminent emblem in a multitude of forms, including gold pendants and diamond-encrusted bracelets. Whether subtle or grand, these extraordinary works recall an observation by Leonardo da Vinci, who noted, “Even the smallest feline is a masterpiece.”

1948: The Duke of Windsor commissions Jeanne Toussaint to create the first three-dimensional panther brooch—this one perched atop a 116.74-carat emerald—for the Duchess of Windsor, who is so enthralled with the feline that she later acquires more than six additional panther designs.

1949-1950: Fashionable socialites begin commissioning their own versions of the panther—among them Daisy Fellowes, who requests a sapphire-and-diamond brooch, and Barbara Hutton, who orders a yellow-diamond-and-onyx brooch with matching ear clips.

2010: The Duchess of Windsor’s 1952 diamond-and-onyx panther bracelet sells at Sotheby’s London for just over $7 million, making it the most expensive bracelet—and the most expensive Cartier item—to be sold at auction at that time.

2014: On the 100th anniversary of the first Cartier panther design, Christie’s sells a panther bracelet (1956) and matching brooch (1959)—both made for the Duchess of Windsor and later sold to Andrew Lloyd Webber, who bought them for his then-wife Sarah Brightman. The set fetches a remarkable $3.1 million, exceeding estimates.