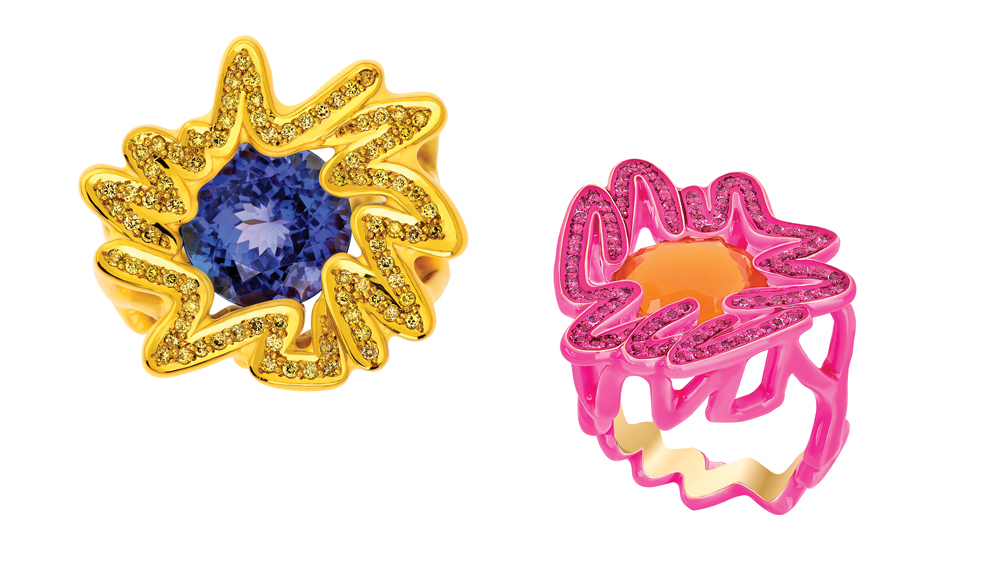 Rubies and emeralds are nice, but they could certainly stand to loosen up. That’s the idea behind British designer Solange Azagury-Partridge’s new Scribbles collection ($1,500–$80,000), which looks exactly how it sounds: like haphazard scrawls stretched across wrists, necks, and fingers. The ceramic-and-lacquer pieces, which pop like Warhol paintings, pair three-dimensional zig-zagging forms with the kind of gems that usually find themselves stuck in traditional gold and silver settings.

Purple rubellites and forest-green emeralds are the bases for Scribbles’ freeform designs, which Azagury-Partridge calls “mini sculptures for the hand.” But those doodles aren’t as random as they appear. The designer cherry- picks each stone for its color, shape, and vibrancy, then sketches an “aura” emanating from each: a mouthwatering fire opal has a home in neon-pink squiggles sprinkled with diamonds; a big green emerald lives in a purple-lacquer cluster; and a large diamond is encased in a twisting baby-blue ceramic ring.

Azagury-Partridge has a habit of going irreverent when it comes to her jewelry. The imaginative designer tends to draw from strange and unusual sources: Her Hot Lips collection, featuring voluptuous lacquered lip-shaped rings, is a clear reference to Salvador Dalí’s Mae West Lips Sofa, while her Blood series has ruby-and-red-lacquer pieces dripping from ears and necks as if from a run-in with a vampire. Scribbles is just the latest in her cheeky approach toward classic styles. “I’m diffusing the preciousness of jewels,” she says. “If I can’t add something different to jewelry, why bother at all?”