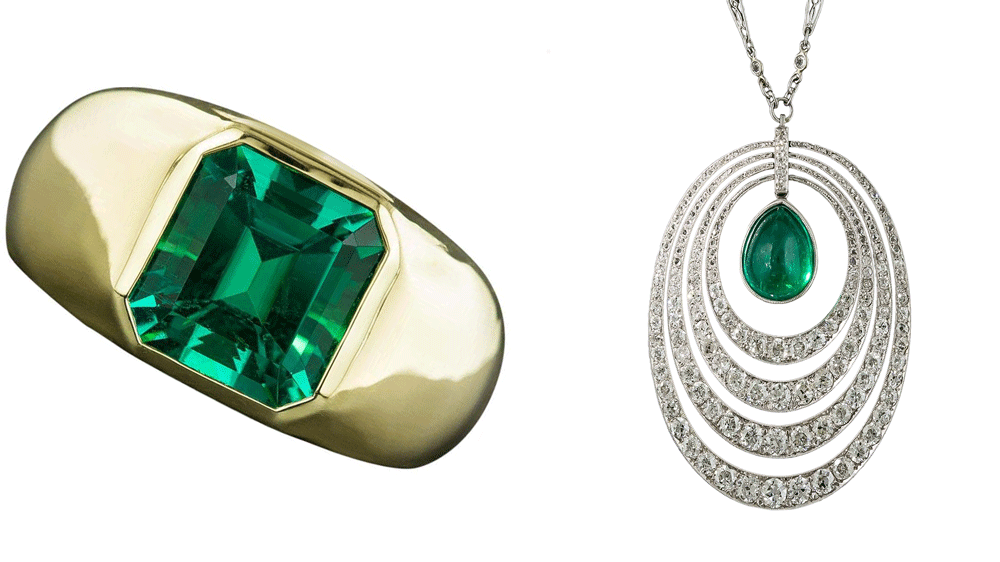 Antique and vintage jewelry has never been hotter—just ask the owners of Lang Antiques, a 53-year-old mecca for period jewels located in the heart of San Francisco (at 309 Sutter Street, just off Union Square), where soaring demand lifted sales in December to their highest total ever.

The reasons for the category’s blockbuster performance are at once general (the fine jewelry market has seen a dramatic uptick in sales since the start of the pandemic) and specific to the particulars of buying vintage. These include the fact that, for all intents and purposes, vintage jewels are one-of-a-kind; they’ve been crafted using age-old techniques and are meant to endure through the ages; and, given their pre-owned nature, they are the epitome of sustainable, their carbon footprints effectively at zero.

The through-line that connects every piece of jewelry worth collecting “is the story behind it,” says Suzanne Martinez, co-owner of Lang Antiques. She joined the business as an experienced gemologist and appraiser in 1992, the year after co-owner Mark Zimmelman, a third-generation gem and jewelry dealer from L.A., purchased it from founder Jarmilla Lang.

“Things have really changed in the last few years,” Martinez says. “People are much more aware of the artist-jewelry of the 1960s and ’70s — designers like Andrew Grima. That whole period has become really hot.”

Robb Report asked Martinez and Nicole Corsini, Lang’s marketing director, about the most collectible and trending styles, periods and makers in the vintage jewelry market circa 2022. Below is a hit-list of their top recommendations.

Jewels from the perennially sought-after Art Deco era are a no-brainer. Dating roughly from 1919 to 1939, the Deco years—named for the influential Exposition Internationale des Arts Décoratifs et Industriels Modernes, held in Paris in 1925—yielded a much-loved style of jewelry characterized by geometric motifs, stylized patterns and clean lines rendered using a prodigious use of diamonds.

The period’s inherently minimalistic aesthetic has been revisited time and again by scores of contemporary jewelers who are in thrall to its timeless look and classic proportions, but the most collectible pieces are the OG styles of the 20th century, featuring signatures from a familiar cohort of mostly French brands, including Boucheron, Cartier and Van Cleef & Arpels. That said, Martinez urges buyers to assess jewels from the period with “an appreciation for quality and workmanship” as opposed to an obsession with brand names.

“We have a lot of pieces that are not signed that are better than signed pieces,” she says. “It could have come out of the same workshop as Cartier. People need to look beyond the signature.”

If Deco is a perennial favorite, the current darling of the vintage scene is the elaborate gold and gem-set jewelry of the 1960s and ’70s, such as the bestiary of designs that emerged from David Webb’s New York City atelier (like this ram’s head bracelet) or anything by Grima, the British jeweler whose use of traditional materials such as gold and gemstones was secondary to his artistic vision (“He’s on everybody’s radar right now,” says Martinez).

Behind every great jeweler of the 20th century was a great workshop. And now, some of those behind-the-scenes manufacturers are getting their due. Chief among them, says Martinez, is Oscar Heyman, the 110-year-old New York City firm that manufactured jewelry for Tiffany & Co., Cartier and Van Cleef & Arpels.

“Now there’s a lot of buzz around the company,” she says. “They’re part of a bigger story.”

The same goes for a handful of well-regarded American firms that operated in Newark, New Jersey, a jewelry manufacturing center from the mid-19th century to the early 20th century—such as the Art Nouveau specialist Krementz, whose delicate jewels (like this 14k gold and pearl brooch) “will hold their value,” according to Martinez.

Bracelets, especially the linear diamond-set styles of the Deco period, are having a moment at Lang, thanks in no small part to Rihanna, who wore a stack of three platinum and diamond bracelets from Lang Antiques to the after-party for the 2021 Met Gala in September.

“When the queen of the Met Ball picks a vintage style, it definitely brings awareness and visibility to the category,” Corsini says. “We always have interest in Deco, but the bracelets heated up after that.”

Brooches are another trending category, among both men and women. “As red carpets have evolved and men are getting interested in fashion, a brooch might be the first piece a man ventures to wear after his watch,” says Corsini.

Beyond the red carpet, however, most buyers are interested in pieces that are wearable, be they Zodiac medallions from the 1960s and ’70s, chunky gold Victorian chains and lockets that have appeal as both stylish accessories and objects of sentimental value or bold gold Retro bracelets from the 1940s that have “beautiful textures and interesting shapes,” says Corsini.

Stones Worth Investing In

When it comes to gemstones, emeralds are in especially high demand. “People are getting very sophisticated in their questions about treatments,” says Corsini.

One stellar example in the Lang collection is an 18k yellow gold gentleman’s ring from the 1970s set with a 5.35-ct. Colombian emerald. “I wouldn’t call it an art piece of jewelry,” says Martinez. “I’d call it a house for the emerald.”

The collection also includes a platinum pendant centered on a 6.61-ct. egg-shaped emerald framed by concentric diamond-set rings that Lang acquired from the collection of a Los Angeles dealer who recently passed away. “He used to collect the best of the best, from the 1950s on,” says Martinez. “Dealers saw everything that was fabulous and if you were in Los Angeles, you saw all the Hollywood jewels, the real McCoy.”

All of which serves as a reminder that when it comes to vintage jewels, the most valuable aspect of a piece isn’t the gem material, the gold or even the maker, but the mileage you get out of telling, and re-telling, its story.