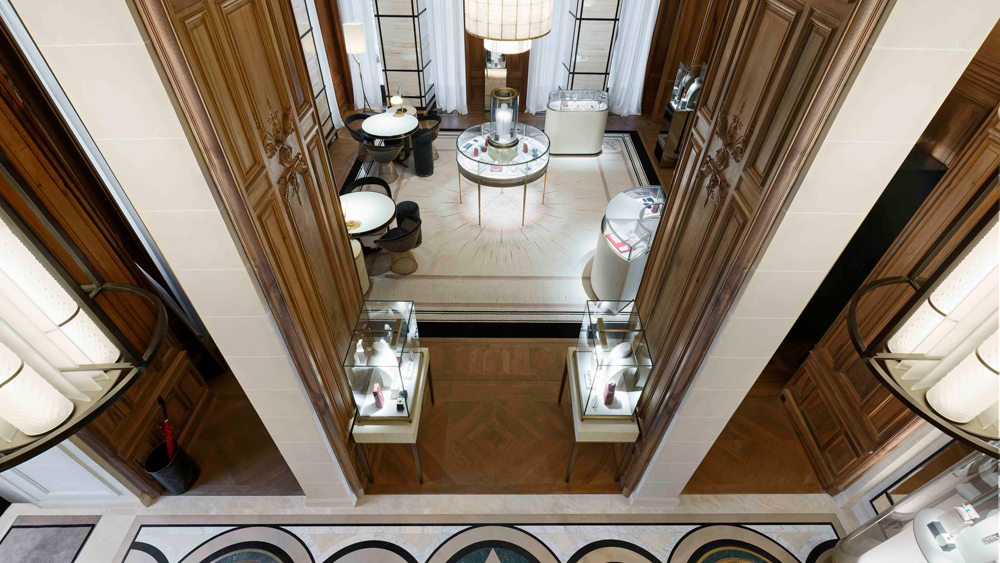 Since being founded by Frédéric Boucheron in 1858, French jewelry house Boucheron has crafted bold, beautiful designs that make a lasting impression on wearers—a distinction that no doubt helped cement its status as one of the 10 most influential jewelry designers of the 20th century. To coincide with its 160th anniversary, Boucheron and its parent company, Parisian-based luxury group Kering, renovated its iconic flagship at 26 Place Vendôme in Paris. Built in 1717, Hôtel de Nocé was originally home to a long list of influential French families and personalities before becoming Boucheron’s home in 1893.

Tasked with recreating the original look of Hôtel de Nocé, interior designer Pierre-Yves Rochon used period-specific furnishings and touches to transport visitors to a different era. A historic entrance on Rue de la Paix still boasts the double-height volumes, Paris-stone facings, checkerboard stone, and cabochon ornament of the original building, while a grand staircase built in the 18th-century has been restored to its timeless grandeur.

The Grand Salon—which still features Louis XV-style walnut paneling that Boucheron had installed in 1893—has been updated with an Art Nouveau-style woven rug, modernist Platner armchairs, and a rock-crystal chandelier designed by Rochon and produced by Maison Tisserant. A separate glass-roofed winter garden with a green marble floor provides tranquility in the midst of the bustling city. The upper floors house workshops, a design studio, and the gems and heritage departments. Le 26, the in-building apartment with services by the Ritz Paris, features a marble table by Mathieu Lehanneur that seemingly imitates the motion of the sea, a wave-like sofa created by Swiss company de Sede, and bedroom wallpaper that mimics the Parisian sky. The overall feeling of the building is that of a private mansion rather than simply a boutique shop—a place where visitors feel like guests rather than clients.

To celebrate the reopening, Boucheron envisioned a limited-edition collection of 26 Vendôme bracelets inspired by the emerald cut of the Parisian square its flagship is located in. Two versions—a yellow-gold option paved with a row of diamonds and a white-gold piece paved with a line of diamonds and accented with two black-lacquer borders—are engraved with numbers from 1 to 26, an homage to the reopening of the beloved shop.