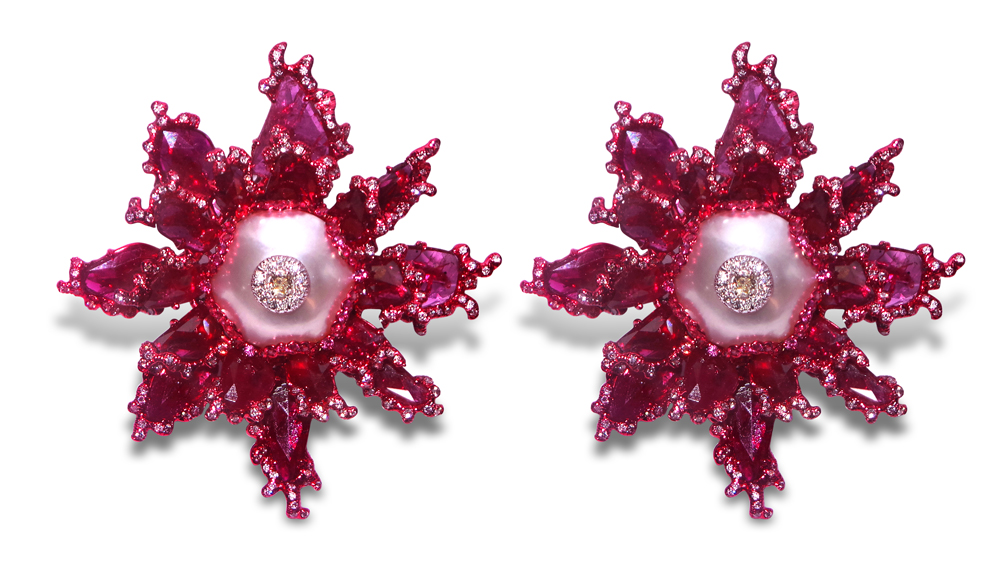 Silvia Furmanovich imparts the vibrant spirit of her native São Paulo to her lavish, colorful creations —stunning adornments that reveal her talent for using unexpected materials. Her marquetry collection features sustainably harvested Brazilian woods set with gemstones, while some of her latest pieces bear seashells and feathers. (silviafurmanovich.com)

For years Fabio Salini created jewelry behind the scenes for famous brands, until 1999, when he launched his own collection; in 2004 he established his atelier on Rome’s Via di Monserrato. If he remains a fairly well-kept secret, his voluptuous pieces are attention-getters: supple necklaces and bracelets that embrace a woman’s neck and wrists, and earrings that flow like liquid and move with the body. (fabiosalini.it)

Yves Spinelli created his first set of stackable, interlocking rings for himself, but fans of the statement-making design quickly spread the word. “I immediately started taking orders from clients and friends,” recalls Spinelli, who launched his brand, Spinelli Kilcollin, in 2010 with his business partner and wife, Dwyer Kilcollin. Their men’s and women’s rings deliver a fresh versatility; they can be worn across several fingers or heaped on one for a bolder look. (spinellikilcollin.com)

Bina Goenka’s creations have been in demand for years among Bollywood stars, and news of her talent is spreading fast. Her fearless approach to such uncommon materials as black coral and conch pearls has led to extraordinary jewelry, including her latest collection, which centers on the elusive pink conch pearl. A criminal lawyer turned self-taught designer, she divides her time between her ateliers in Mumbai and London. (binagoenka.com)

In the heart of downtown Los Angeles’s jewelry district resides a true gem—Sylva & Cie., the atelier of Sylva Yepremian. The longtime Angeleno, who was born in Lebanon, broke the mold in 2008 when she unveiled her antiquity-inspired pieces, each crafted by hand using eco-friendly materials from reclaimed diamonds to vegetal ivory. (sylvacie.com)

The São Paulo–born designer Fernando Jorge has set the jewelry industry abuzz over his fluid creations, whose sensual lines recall owing water or twisting vines. Jorge grew up as an avid drawer and honed his design skills at London’s Central Saint Martins arts and design college. Now 37, he is based in London and gravitates toward vibrant gems, such as opal, ruby, and amethyst. (fernandojorge.co.uk)

Considered a modern master by many a luminary in the jewelry world, Lauren Adriana combines exceptional gemstones in a painterly way, in creations such as the rubellite-and-pink-sapphire ring and spinel-and-diamond earrings shown here. Each of the 30-year-old designer’s pieces is unique and never to be repeated. (at Fred Leighton, fredleighton.com)

Though the boutique of Hedy Martinelli lies on the Via Fontanella Borghese in the heart of Rome, it remains for many a hidden gem, perhaps because its namesake designer creates fewer

than 100 pieces each year. Her statement-making jewelry incorporates antique and modern-day chain mail as well as unexpected mixes of elements, such as carved cameos and colored stones. (hedymartinelli.com)

When truly personal jewelry is in order, master goldsmith Sabine Roemer delivers. A graduate of Germany’s Pforzheim goldsmith and watchmaking school, Roemer offers a bespoke service that infuses age-old craftsmanship with a contemporary sensibility. Each year she accepts a very limited number of commissions, then sketches the designs, sources the gems, and hand-forges the pieces in her London atelier. (sabineroemer.com)

Alessandro Sabbatini started his Sabba collection in Paris just 3 years ago, when he was 26, and already his one-of-a-kind creations are in high demand. The former Cartier designer makes only 30 to 40 pieces a year. Think flowing jade-and-emerald earrings that are voluminous in scale but light and fluid on a woman. (at FD Gallery, fd-gallery.com