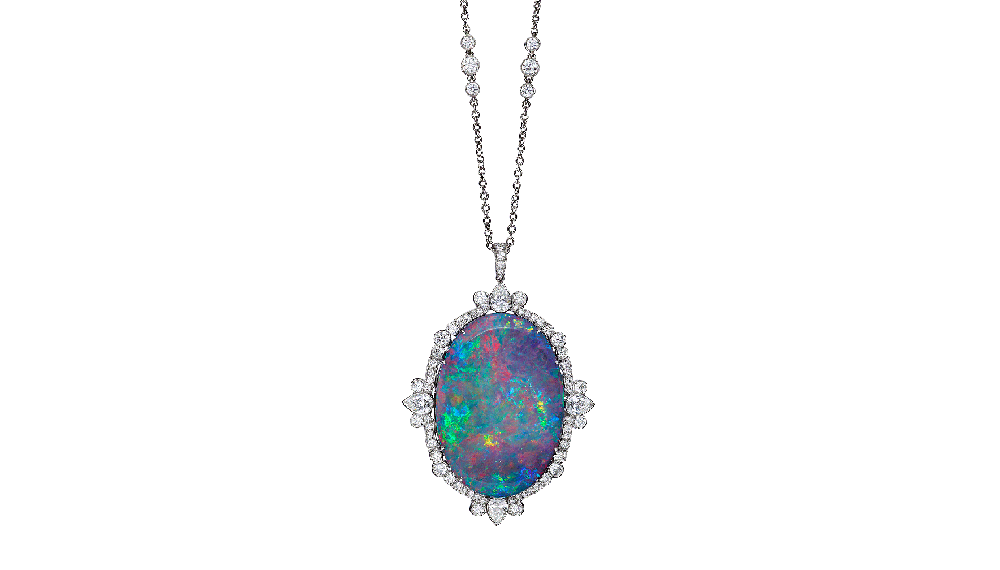 Australia is classic opal country, and the most important, worldwide source of opals. Almost 95 percent of all fine opals come from the dry and remote outback deserts. Opal variations are practically unlimited, including black, white, milk, crystal, boulder, matrix, Mexican and fire, with black opals considered the rarest and most valuable of all Australian opals, as seen in our one-of-a-kind pendant featuring a 34-carat black Australian opal framed by diamonds and set in platinum for a timeless and classic silhouette.

One of the most fascinating gemstones, opals can express every color in the visible spectrum as nature’s entire splendor seems to be reflected in its opulence. Numerous legends and myths surround this colorful gem, which can be traced back to the ancient times of Australian aborigines, who believed that the opal is a manifestation of rainbows on the ground, as it sparkled with all the colors of the rainbow.

Hamilton Jewelers unveils a magnificent opal creation. Up to the first half of the 19th century, opals were relatively rare. But as the era of Art Deco blossomed, opal experienced a flourishing with contemporary gemstone artists preferring them to all other stones because of their subdued charm and excellent suitability to be combined with enamel, another popular material of those days.

The special attraction and fascination of opal is only enhanced by the belief opal has a special healing power. It is reported to help its wearer find true and real love. The fantastic color play of opal reflects the changing emotions and moods of people, striking contrasts that characterize the colorful world of this fascinating gem.