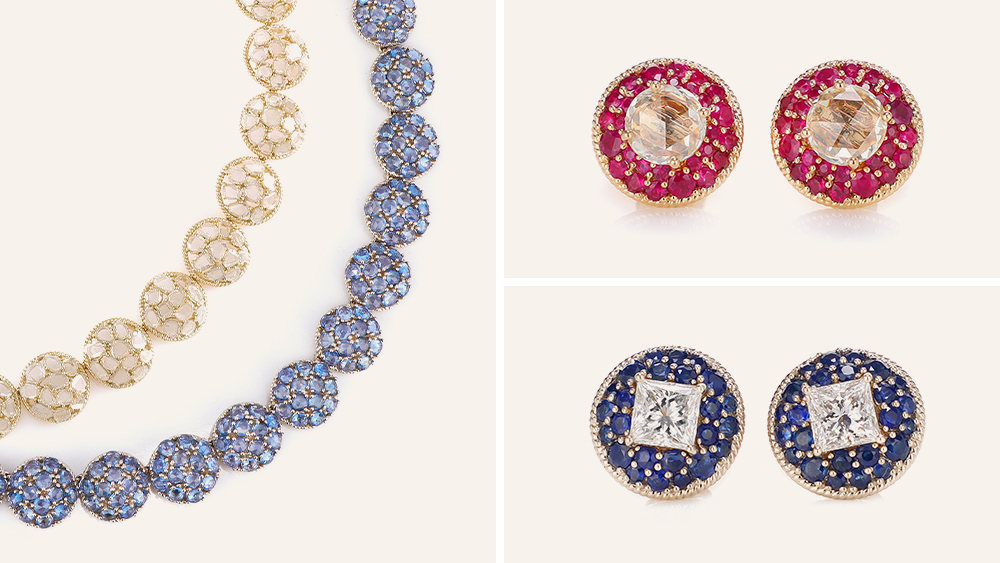 When Ritika Ravi was a nine-year-old growing up in Chennai, her grandfather noticed that, unlike most Indian girls, she didn’t wear jewelry.

“He complained to my mother: ‘Why does she not have anything on her?’” Ravi recalls. “I was not a typical girly girl. In India, it’s considered very auspicious to wear jewelry. And it really upset my grandfather that I didn’t. My mom said, ‘She doesn’t like anything I buy for her.’”

Ravi’s grandfather had a solution: “He told my mother, ‘Take her to the store, and ask her what she likes,’” she says. “My earliest memory is of my mother taking me up and down so many jewelry stores, trying to figure out what I liked.”

Although Ravi didn’t know it then, that experience planted a seed that would flower when she was preparing to graduate from the London College of Fashion in 2017. As a student, she’d explored different aspects of the fashion industry, from footwear to merchandising. To her surprise, the time she spent designing jewelry was her favorite part.

“When I did my graduation project, I knew exactly the kind of brand I wanted to build,” says Ravi.

Come mid-September, Ivar, the jewelry brand she founded in September 2018, will open its second flagship location, on East 73rd Street, just off Madison Avenue in New York City (the first opened on Vommuli Island in the Maldives in early 2019).

“It’s the jewelry I was looking for all my life,” Ravi tells Robb Report. “I wanted to make it more accessible to a larger, more international crowd. I wanted to take it outside of India. Traditional Indian craftsmanship with a contemporary aesthetic.”

In addition to stocking a number of exclusive limited edition pieces, the Manhattan boutique will feature a range of 18-karat gold styles studded with gems, including “the Big Three” (rubies, sapphires and emeralds) as well as peridots, amethysts, aquamarines and citrines. Many of the styles will feature a form of rough diamonds known as polki, which Ravi describes as her “all-time favorite.”

“It’s so traditional and so Indian, but actually has a lot of Persian influence,” she says. “It’s very different from full-cut diamonds. They came to India with the Mughals.”

Prior to the pandemic, Ivar staged several pop-ups in a handful of glamorous locations. From its launch event at the St. Regis Maldives Vommuli Resort in September 2018, Ivar traveled to Porto Cervo in Sardinia in the summer of 2019, and on to Dubai for a collaboration with Harvey Nichols.

Now that she’s opening in New York, Ravi is realizing a dream she almost didn’t dare to indulge. And behind it all is the supportive family that helped her transform her vision—which she began nurturing long before the brand truly came into focus—into reality.

“I was still in college, having dinner with my family, and my uncle was also there,” Ravi recalls. “He said, ‘You need to figure out your brand. What should we name it?’

“My uncle said, ‘How about Ivar?’” Ravi says, noting that the word is her last name spelled backward. “‘That’s a great name,’ I thought, and it stuck with me. This was in 2014, my first year specializing in jewelry. My uncle still jokes, ‘I own the trademark.’”