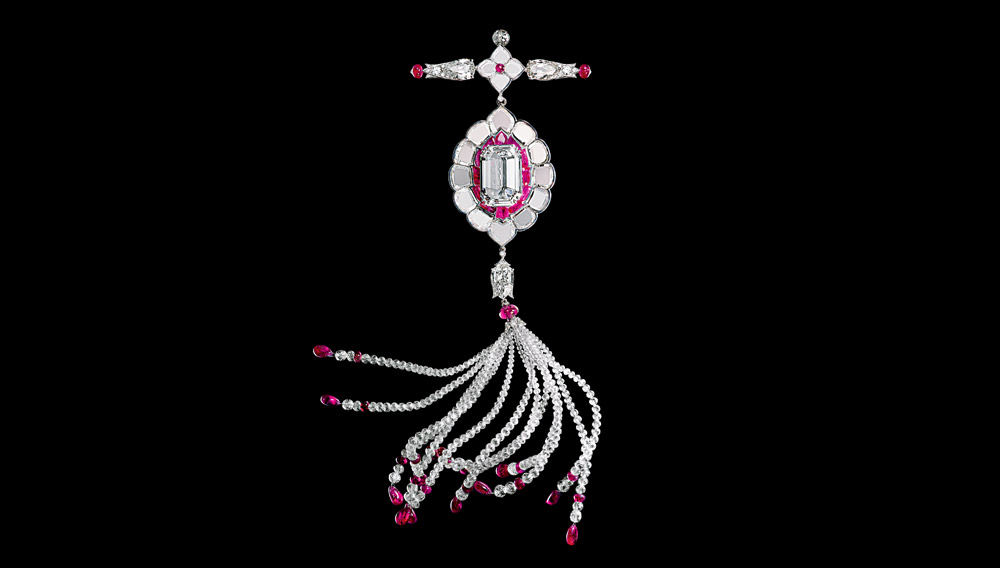 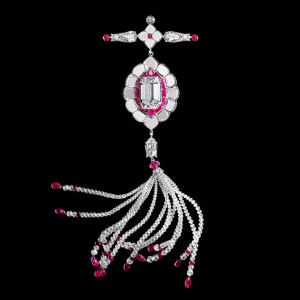 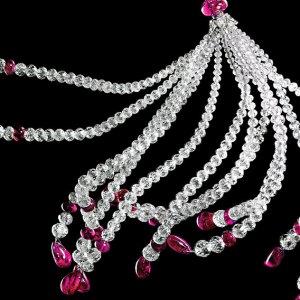 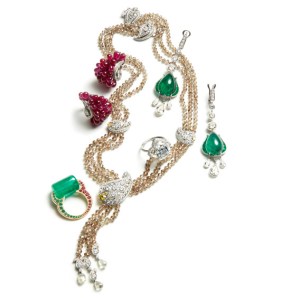 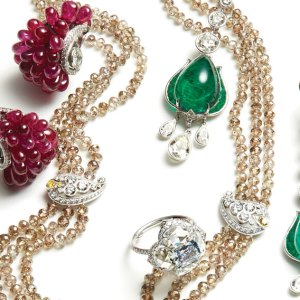 The pendant brooch is an extravagant piece, featuring a 10.03-carat Golconda diamond, recalling the legendary mine in India, surrounded by a mosaic of calibrated rubies and flat-cut diamond “petals” to form a favored Mogul flower, the lotus. A perfectly proportioned tassel of diamond and ruby beads cascades beneath the flower, a flourish sometimes found in turban jewels. The back of the piece is covered in pavé diamonds, echoing the Indian tradition of decorating the reverse side.

Despite the many classical touches, the brooch is actually a contemporary piece by Viren Bhagat, one of a select group of jewelers currently drawing inspiration from historic Indian and Mogul designs. Cartier, for example, has revived its carved emeralds and sapphires, while Graff has incorporated ornate scrolls made of hundreds of diamonds into its cuffs. Joel Arthur Rosenthal, the designer behind JAR Paris and a longtime devotee of Indian designs, recently depicted sinuous Indian architecture in a rock-crystal brooch with a 35.36-carat octagonal 17th-century emerald at its center. (Many of Rosenthal’s Indian-influenced pieces are on display in a retrospective of his work, Jewels by JAR, at the Metropolitan Museum of Art in New York through March 9.)

“There has always been a fascination with the aesthetic of Indian jewelry; it is exotic and intoxicating to Westerners,” says Amin Jaffer, international director of Asian art at Christie’s, who has carefully assembled for a member of Qatar’s al-Thani family a collection of more than 400 pieces of Indian jewelry and jeweled artifacts spanning four centuries. Jaffer uses this collection to illustrate his new book, Beyond Extravagance: A Royal Collection of Gems and Jewels, which chronicles the styles, techniques, and traditions of Indian jewelry from the distant past to the present day. The display of elaborate, colorful jewels began in the late 1500s with the leaders of the Mogul Empire, and the practice was carried on throughout the empire’s history. Men in particular adorned themselves with rings, brooches, gem-encrusted turbans and belts, and cascading bibs of jewels. Perhaps no other culture, says Jaffer, has imbued jewelry with so much symbolic meaning.

This customary ornamentation was made possible by India’s abundant mines: The country is home to some of the world’s greatest gem deposits, including the fabled Golconda diamond mines. Indeed, India was the primary source of diamonds for hundreds of years until the gems were discovered in Brazil in the 1730s and, later, across the African continent and in Russia. The Indians also benefited from nearby sources for Kashmir and Ceylon sapphires, as well as other colorful gems from what is now known as Sri Lanka. Natural pearls, which first arrived from the Persian Gulf during the monsoons, were also highly coveted. Once acquired, these raw materials were transformed into intricate works of art by India’s great artisans, who passed their skills—such as the meticulous cutting and carving of stones and the adept working of enamel and metal—down through generations.

Jewelry served as a kind of social shorthand, signifying not only a person’s wealth but also social rank, marital status, and geographical origin. Gems also were associated with the occult. Many Hindus imagined that gemstones were linked to the planets and other heavenly bodies and possessed mystical powers. Rubies, for example, were believed to exude positive energy and protect the wearer; emeralds were considered an antidote for poison; and natural pearls were thought to heal and transmit strength. Even today, says Jaffer, some Hindus believe that the right stone can bring them fortune and the wrong stone grief; some even sleep with a gemstone under their pillow to determine if the stone emanates good or evil before deciding whether to buy it.

By the end of the 19th century, some adventurous Western jewelers like Jacques Cartier had begun to capitalize on India’s extraordinary mineral resources. In 1911, Cartier became one of the first European jewelers to travel to India and bring back stones. He adapted the Indian aesthetic for European clients seeking a more avant-garde style and, in 1925, exhibited a series of breathtaking pieces incorporating large, Mogul-era carved emeralds at the Exposition Internationale des Arts Décoratifs in Paris. One piece in particular stood out: a clip brooch featuring several carved Indian emeralds dating from 1675 to 1725—the largest of which was 88.03 carats—set in a vertical composition of platinum, diamonds, and cabochon emeralds.

The royal Indians of this era were as interested in Cartier’s talents as he was in their treasures, and the Frenchman forged relationships with numerous maharajas during his visits. As a result of this liaison, Indian royals came to Paris laden with jewels to place orders for custom pieces from Cartier, Chaumet, Mauboussin, and Van Cleef & Arpels. In turn, India’s profuse color palettes and daring designs were embraced by Western tastemakers including Diana Vreeland, the Duchess of Windsor, and Daisy Fellowes, who commissioned Cartier’s multicolor Tutti Frutti necklace, which combined carved cabochon-cut emeralds, rubies, and sapphires.

The Indian style offered an exciting counterpoint to the prevailing European aesthetic, combining nearly every colored gemstone in a single design; displaying carved figures in exceptionally rare stones, which were typically coveted for their purity; employing the Kundan technique, which uses stones encased in gold metal to create a soft glow, in contrast to the intense sparkle of Western stones; and decorating the reverse sides of jewelry pieces with elaborate enamel adornments. “In India, it isn’t about symmetry and facets,” says Jaffer. “It is more about the emphasis of the overall effect of a design.”

Today, a new generation of jewelers carries forward this fusion of cultures. Leading the way, notes Jaffer, are Viren Bhagat in Mumbai and JAR in Paris. “Viren is a genius who marries the Indian aesthetic with the art deco simplicity of lines, lack of visible metal, and exceptional gemstones,” he says, while Rosenthal of JAR favors old-cut Indian stones and diamonds that are typically flat. Works by Bhagat and Rosenthal are part of the al-Thani collection, the most recent contributions to a legacy of breathtaking beauty—but certainly not the last.

Weezer and Fall Out Boy Face Off Over Strippers From Hell, Bad Restaurants on ‘Family Feud’