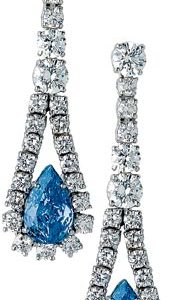 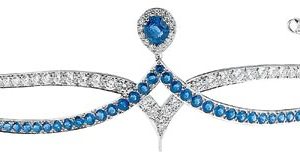 Only the cognoscenti are aware that the venerable British crown jeweler Garrard has opened its first American salon—signage is limited to a discreet nameplate on the doorbell at 133 Spring St. in the heart of New York City’s SoHo.

In keeping with this exclusive insider theme, Garrard’s new salon appears more like a chic downtown loft apartment than a fine jewelry boutique. The space includes a dining room and living room that are appointed with eclectic furnishings, such as classic herringbone wing chairs juxtaposed with large shagreen-covered pods that serve as showcases for the jewels. “The salon was designed to make shopping a very personal experience,” says the company’s high-profile creative director, Jade Jagger, the 32-year-old daughter of Mick, who also uses the boutique to entertain clients and friends. Jagger worked closely with British architect Tom Bartlett, who designed Garrard’s London store and Jagger’s home in Ibiza, Spain, to create a space that reflects her Bohemian and playful sensibility.

In just two years, Jagger has made her mark on the 300-year-old brand with edgy new jewelry collections and the hip new boutique. Jagger, however, remains true to Garrard’s British heritage by maintaining classic elements, such as its centuries-old crown motif and G hallmark that appear on most of its jewelry and silver. And her shop pays tongue-in-cheek homage to the brand’s roots with Union Jack flags and a portrait of a young Queen Elizabeth adorning the walls.

The designer’s artistic influence is apparent in a series of one-of-a-kind pieces that are distinguished by their unusual color combinations. One ring features a large violet tanzanite and orange mandarin garnet surrounded by pavé-set diamonds and rubies. Among her favorite new pieces are a large diamond-encrusted wing pendant suspended on a chain of linked white gold skulls and a magic wand pendant adorned with pearls to, as Jagger says, “make all your wishes come true.”

Aside from unique pieces, Jagger has created new designs that are destined to become classics, including the bold gold Graffiti collection of pendants and rings that can be engraved or set with stones to suit any whim. The store also offers a bespoke service for its clients to order customized jewelry, silver, and leather accessories, which are all crafted in Garrard’s London workshop.

To celebrate the New York opening, Jagger hosted a series of private parties where she unveiled many of her new designs. One popular party item was a $30,000 sterling silver, gold-lined champagne bath that can hold several bottles on ice. Guests got into the festive spirit by trying on Garrard’s new tiaras, including a $170,000 diamond and rare red spinel design that was inspired by original crowns made for the British Royal family. Jagger’s knack for blending shopping with revelry is sure to turn this best-kept secret into the talk of the town.