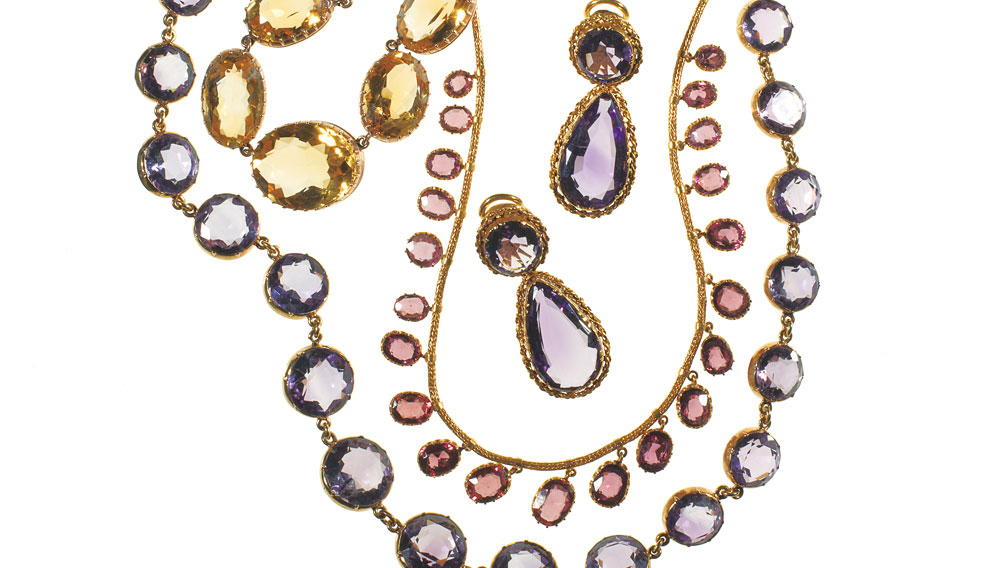 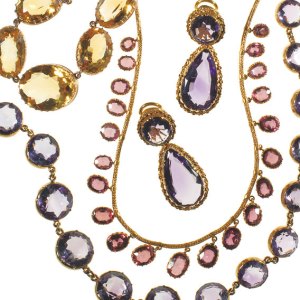 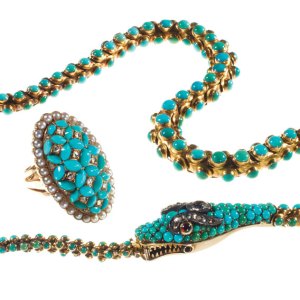 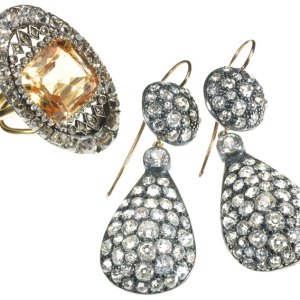 The exquisite pieces that make up Olivia Collings’s meticulously edited collection of Georgian-era jewelry have survived centuries—in some cases tucked away in musty attics or sealed in dilapidated safes. Even so, these intensely sparkling strands of colorful gemstones and snake- and skull-motif designs might easily meld into the offerings of many top-tier contemporary houses, which seek to satisfy today’s penchant for everyday jewelry that makes a whimsical personal statement. Thanks to this appetite for the fanciful and unfussy, Georgian jewelry is enjoying a recent revival among collectors; yet Collings—who coauthored Georgian Jewelry 1714–1830 with Ginny Redington Dawes, and who is a specialist in this period—has been hunting these treasures for more than four decades.

These jewels have been to balls at the royal court, and they have danced under great chandeliers alongside one of the King Georges,” says Collings, who has been captivated by British jewelry from the Georgian era since she was a young girl in Kent. “Today, you can wear these great Georgian necklaces and lockets with a white blouse and jeans and look fabulous.”

Among the era’s most sought-after pieces—then and now—are the Riviera necklaces. These adornments, which gained popularity around 1750, feature simply linked strands of graduated matching diamonds or gemstones, typically backed with gold or silver foil to enhance both color and brilliance. The effect is “like a river of light,” Collings says. (Moreover, because of the way its sparkling coast looked in the evening, the French Riviera is traditionally believed to have been named after the necklaces.) Certain themes were also in vogue, including snakes and skulls. Designs with the serpent, which symbolized eternity, often included rings and bracelets rendered in colorful enamel, gold, and gemstones. Skull motifs, which evoke a certain Goth chic today, could be found on the mourning jewelry worn during that period, when a wealthy individual might have bequeathed as many as 50 gold skull rings to family and friends on passing.

“Much of modern jewelry was influenced by Georgian jewelry,” notes Collings, who has been selling pieces at Barneys New York since the 1980s and sees clients upon request in London. “Jewelry was so romantic in that period and was often delivered to a woman on her breakfast tray.”

Georgian-era jewels, she also points out, were typically laden with meaning. Turquoise pieces were given as “forget me not” gifts, pearls were presented as a tribute to the recipient’s beauty, and designs with musical-instrument patterns symbolized the music of love. Indeed, in the Georgian era, design and meaning trumped perfectly cut gemstones: Many of the surviving pieces incorporate unusual, heavily included stones. Among these is Collings’s own large, portrait-cut diamond ring, which is shot with shards of carbon. “It’s somehow a magical, fun, and strange stone,” she says. “The idea that fine and expensive jewelry is just for ball gowns is simply not true.”