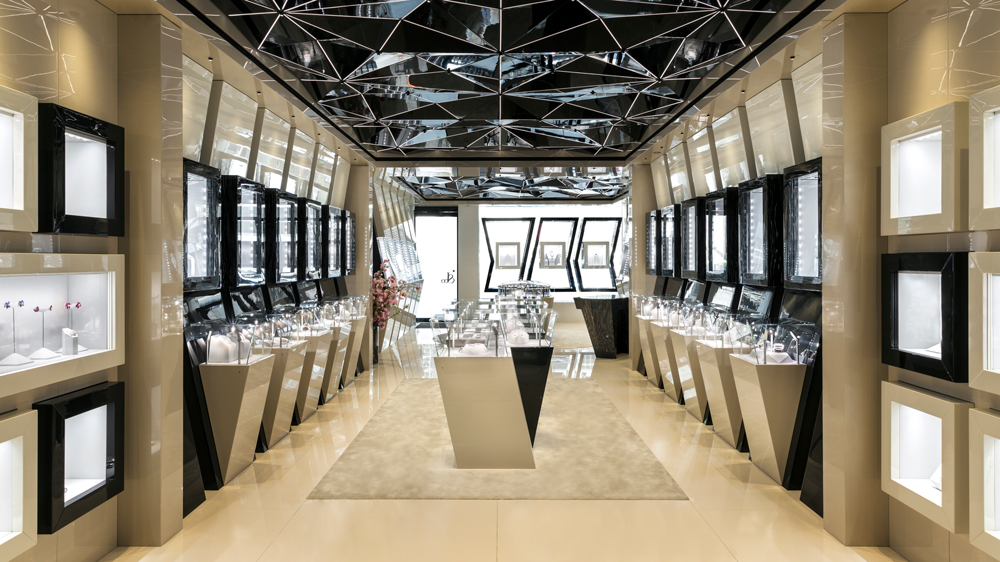 After a year of renovations, Jacob & Co. has reopened its two-story, 4,000-square-foot Manhattan flagship at 48 East 57th Street. Founded in New York by Jacob Arabo in 1986, the brand is best known for its bold approach to jewelry and watches—Jacob & Co. designs have often turned heads and caught the attention of flashbulbs on and off the red carpet. Actors, models and musicians continue to be some of Arabo’s most faithful clientele, from Madonna and Pharrell to Adrian Brody and Naomi Campbell.

“After focusing much of our effort on product development and overseas expansion, it was time to come back to the place where it all started and show New York City how much we’ve grown,” Arabo said in a release from the brand. Roman Vnoukov of Design Studio Romani was enlisted to help incorporate elements that honor the brand’s most iconic creations—for example, the store’s striking geometric façade and interior ceiling were inspired by the dial of the Astronomia Meteorite watch.

“I love our new facade and how it sets us apart from all of the other buildings on the block,” says founder Jacob Arabo. “It instantly captures the attention of those walking by and gives them a sense of the bold approach to design that can be expected from our brand.”

Inside its doors are even more bold design components— high contrast zebrawood, mixed media artwork by Jacob himself, a central showcase modeled after the sapphire dome of the Astronomia timepiece collection and transfixing transparent glass flooring that exposes genuine New York City bedrock as it leads to the boutique’s first floor VIP section (where private appointments take place).  On display are some of the brand’s latest creations, including the new Twin Turbo Furious timepiece, Astronomia Maestro, cufflinks, and bold statement jewelry made with rubies, white diamonds, emeralds, and pink and yellow sapphires.

The freshly revamped flagship joins a bevy of other Jacob & Co. outposts in more than a dozen countries, including Japan, Italy, the United Arab Emirates and the United Kingdom.