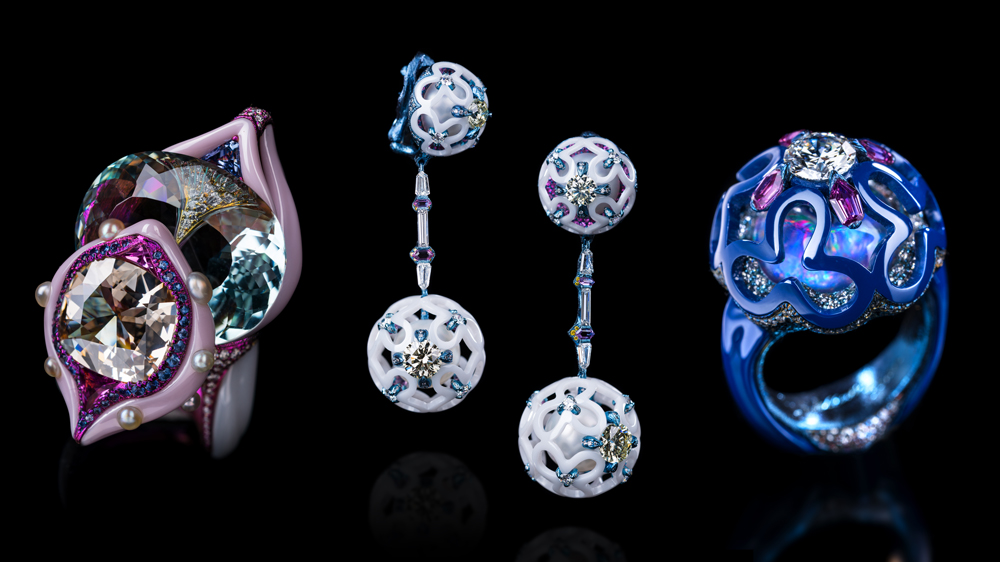 Wallace Chan broke a porcelain spoon when he was five years old.

The mess was temporary—the tiny shards were swept up; the subsequent reprimands came and went—but the moment stayed with him. “Our memory is our greatest material,” Chan said at an event in New York earlier this month—and this one became the catalyst for a decades-long quest.

After apprenticing with an engraver as a teenager, Chan began collecting and studying porcelain artifacts. In the years since his star-making debut at esteemed art fairs—like The European Fine Art Fair (in 2016) and Biennale des Antiquaires (in 2012)—Chan has been workshopping a more durable porcelain. One that would not shatter. Over the last four decades, the Hong Kong-based artist (now 62) has drawn international attention for being a jewelry pioneer in not just design, but materials and craftsmanship. His past inventions include dynamic one-of-a-kind pieces  made with ultra-lightweight (but nearly indestructible) titanium; The Wallace Cut, an entrancing three-dimensional carving technique; and elaborate gemstone settings made (mind-bendingly) without the usual metal claws.

Traditional porcelain is smooth, naturally white and appealingly curvaceous. It’s made from a variable combination of kaolin clay, china clay, quartz, and alabaster, and is often used to make cookware, teacups, and decorative ornaments. The material dates back more than 2,000 years to the time of China’s Eastern Han Dynasty. Though porcelain is quite durable, it has always had limitations (see: Chan’s shattered spoon). It has never been unbreakable.

This month, after seven years of research and experimentation, Chan unveiled Wallace Chan Porcelain, a new material that is five times stronger than steel and, essentially shatterproof. Chan—along with a team of scientists and engineers in his Hong Kong workshop—created the proprietary material by reinforcing porcelain with iron, silicon, zirconium and another ingredient (some mystery remains).

Each of the 13 new designs demonstrate the fanciful, dreamlike aesthetic for which Chan is known—from a pair of galactic-inspired South Sea pearl earrings to a pendant that seems to capture a starry supernova with a fusion of sapphires, diamonds, and vivid blue-green titanium. Chan’s new porcelain pieces will be part of an upcoming solo exhibition at Christie’s Hong Kong, which will be open to the public January 14 through January 18, 2019. Called Shapeshifter: The Multiverse of Wallace Chan, the exhibit will spotlight more than 80 creations, (many of which have never been seen) and be accompanied by a masterclass series on design.