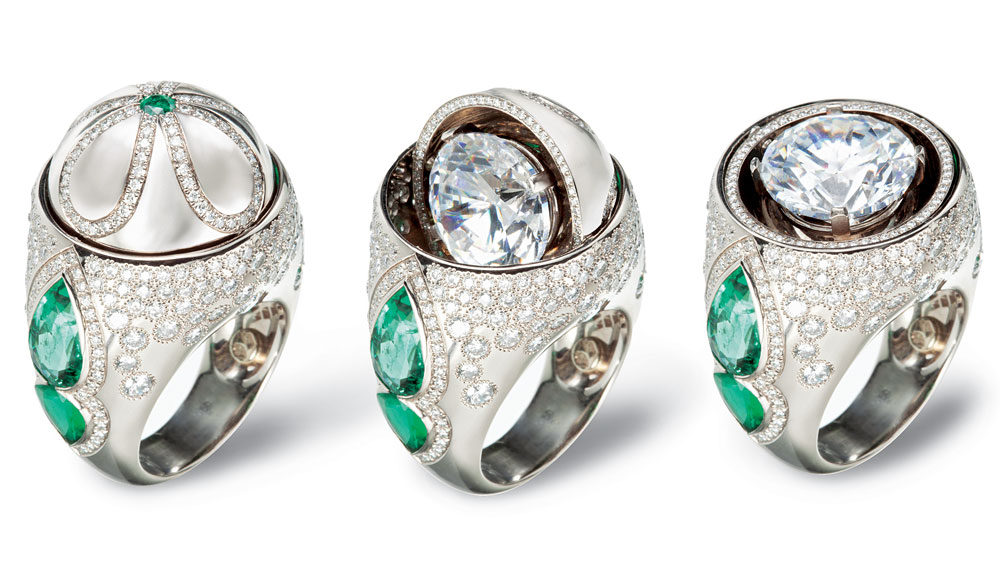 In the demure world of fine jewelry, where designers tend to play it safe when working with tens of thousands of dollars in diamonds and gemstones, Wilfredo Rosado is shaking things up. One of his first signature pieces—a gold-and-diamond cuff—is as exotic as a rare bird, sporting a four-inch-high fan of brightly colored feathers. He has gone on to emblazon cocktail rings with a brilliant sapphire pattern reminiscent of Mondrian, create bangles that almost shimmy with dangling diamonds, and adorn blackamoor pendants with diamond-studded tank tops, giving the traditional black African figures urban street style.

“People say I’m breaking the rules,” says the 47-year-old Rosado, whose studio is in Williamsburg, Brooklyn, far from midtown Manhattan where most of the city’s jewelers reside. “But I’m happy not to know the rules.”

Rosado neither comes from a jewelry family nor has trained in jewelry design; instead his background includes working as an assistant to Andy Warhol, then spending 23 years at Giorgio Armani, as fashion director in the United States. A longtime passion for jewelry led Rosado to leave Armani five years ago to start his own business (no surprise to Mr. Armani, who fondly called Rosado “Cleopatra” because he wore so much jewelry).

Rosado brings a fashion insider’s sensibility for both the cutting edge and couturier craftsmanship. The feather series, for example, includes diamond-studded cuffs, earrings, and a necklace, each with colorful interchangeable plumage handmade by the legendary Parisian couture workshop Maison Lemarié. Rosado’s cameos—made in Torre del Greco, Italy, where cameos have been carved in shells for generations—depict young, modern women with stray wisps of hair in their eyes, and sometimes even an exposed breast.

As edgy as his pieces may be, Rosado seeks out specialized old-world artisans to bring them to life. Working alongside craftsmen in France, he created the Urban Street Smart ring, a design of diamonds, emeralds, and 18-karat gold with a large center dome that swivels to reveal a 5-carat diamond. Another cocktail ring features a large amethyst that lifts to reveal a mirror for use in a quick lipstick application. Prices for the collection range from $12,000 to more than $300,000.

As diverse as Rosado’s portfolio is, his designs all have a certain unabashed boldness and sex appeal. “My pieces,” says Rosado, “have a fun-filled energy and a lively movement, which speak to a woman’s sensuality.”