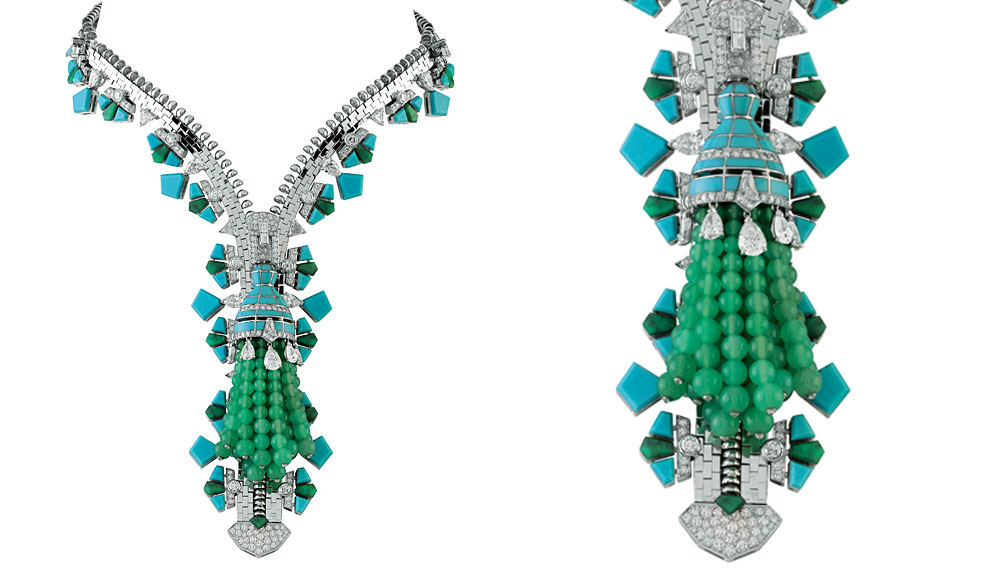 In the 1930s, Paris was the creative center of the avant-garde, and the Duchess of Windsor certainly captured the spirit of the times with an avant-garde idea of her own: She wanted a fully functioning zipper embellished with gemstones and diamonds, and she asked the French jeweler Van Cleef & Arpels to create it. The Duchess, known for her individualistic style, collaborated on the design with the house’s artistic director, Renée Puissant, the daughter of founders Estelle and Alfred Van Cleef. Puissant presented a sketch, but alas, for reasons unknown the Duchess never made the commission.

It was not until 1951 that the house produced what would become one of its most iconic and complex pieces: a working, flexible gold zipper necklace adorned with diamonds and jewels that transforms into a bracelet when zipped. The piece perfectly reflects the 1930s’ surrealist movement in art and design, says Nicolas Bos, president and CEO of Van Cleef & Arpels in the Americas, and worldwide creative director. “We took something from a completely different universe used in everyday life—the zipper—and brought it into the world of preciousness and fine jewelry,” Bos says.

The inventive design also inextricably links fashion with jewelry, which is why Van Cleef & Arpels chose to unveil four new renditions of the Zip necklace during the Paris Haute Couture shows in late January. Among the versions is an Art Deco–style necklace with geometric patterns in mother-of-pearl and lapis lazuli, and another with a mélange of multicolored sapphires.

Some of Van Cleef & Arpels’ earlier Zip designs are on display in an expansive exhibition, Set in Style: The Jewelry of Van Cleef & Arpels, at the Cooper-Hewitt National Design Museum in New York through June 5. The exhibit showcases more than 300 pieces of jewelry, watches, and sketches illustrating the house’s influence on design over the past century. But despite all the fanfare, those who wish for a Zip necklace of their own should not expect to acquire one easily: It takes a team of skilled craftsmen from 400 to 1,000 hours to create one, and as much as a year for a special-order design to be completed.