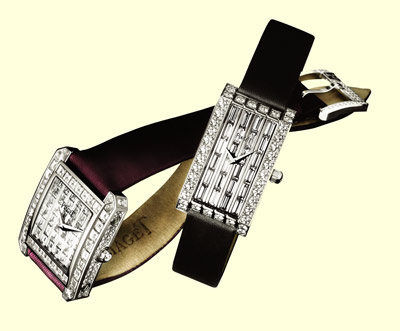 For more than 50 years, Piaget has turned heads with its decadent diamond-studded jewelry watches, but it received little recognition for its jewelry designs—that is, until now.

The new Magic Reflections jewelry collection captures the essence of the brand with its luxurious, imaginative, and distinctly feminine designs. To emphasize the significance of the launch of its first high jewelry collection, Piaget transformed a New York ballroom into an enchanting “secret garden”—complete with a lily pond, antique fountains, and garden gates. At the elaborate preview, the nature-inspired pieces of jewelry were cleverly positioned among the exotic flora as though they were hidden treasures.

Magic Reflections is an “idealized vision of nature,” says Piaget’s North American President Thomas Van der Kallen. Water is a prominent design theme, as evident in the Waterfall necklaces and bracelets with cascading diamonds, and a Fountain design with diamonds and sapphires flowing from a ring. More mainstream interpretations of these one-of-a-kind creations will debut in Piaget boutiques in Europe, America, and the Far East this month, while the original pieces will travel from store to store.

“We are focusing more on the design and individuality of each piece rather than on large stones,” says Van der Kallen. “Technically, these were very complicated pieces to create, since each design has either movement or versatility; nothing is static. This adds to the relationship between a woman and her jewelry and ensures that she will never tire of her jewels.”

The jewelry is not unlike Piaget’s women’s watches, which are known for their stylish versatility blended with a little whimsy. The Secret watch, for example, appears to be a bracelet but opens to reveal a dial, and a playful ring watch resembles a pavé diamond ring, but its centerpiece swivels to expose a watch.

In addition to creating the high jewelry pieces, Piaget has been steadfast in developing new watch designs over the past few years. Its commitment to staking a claim in prestige watchmaking was underscored by the 2001 opening of a new manufacture on the outskirts of Geneva. After four years in development, Piaget’s first limited edition Emperador Tourbillon arrived in stores this fall. The latest additions to the new Polo collection, its signature timepiece line first introduced in the 1970s, are a limited edition men’s platinum model and a series of gold timepieces with stone dials made of meteorite, lapis, jasper, and onyx.

Just as its updated and expanded jewelry image is sure to draw attention, Piaget’s haute joaillerie timepieces continue to turn heads. The new high-jewelry Protocole XLS, features a diamond baguette-covered case and bracelet. Sitting front and center on a pedestal in Piaget’s enlarged front window, the $364,000 timepiece will surely be stopping traffic on Fifth Avenue.