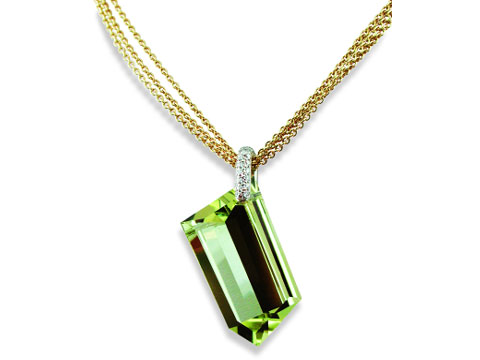 When jeweler Samuel Getz laid eyes on a 77-carat rough aquamarine recently, he imagined a large snowflake glistening in the sun. Without hesitation, he purchased the gem and made it the centerpiece of a pendant. He surrounded the stone with more than 100 diamonds in rhomboid, baguette, and marquise shapes to depict his vision of crystallizing ice.

This industry veteran, who recently opened an eponymous jewelry salon in Coral Gables, Fla., shuns flawless sapphires and diamonds, and other traditional precious gems, in favor of unusual, more esoteric stones. He also has a knack for uncovering exceptionally large stones in artistic cuts with which he creates innovative, one-of-a-kind designs.

“I love exciting and unique stones that grab my attention,” says Getz, a third-generation jeweler whose grandfather founded Mayors Jewelers in Cincinnati, Ohio, in 1910 and moved to Miami in 1937. Under the leadership of the younger Getz, who joined the family business in the 1970s, Mayors grew into one of the most prominent private jewelry chains in the country, with 24 stores in Florida and Georgia. In 1998, he sold Mayors and stayed on as a consultant until he and his wife, Jennifer, decided to open the private salon so they could focus on working directly with clients and designing signature pieces. “My favorite part of the business is the creative side,” he says.

Getz takes special pleasure in introducing his clients to lesser-known, exotic gems such as chrysoberyl, heliodor, and tsavorite. “People are amazed by the diversity in garnets, for instance, which come in nearly every color of the rainbow and are as brilliant as diamonds,” he says. Getz procures his gems from around the globe, with sources in Germany, Switzerland, Ukraine, and the Far East. Among his treasures is an 87-carat bicolor topaz that ranges in color from sky blue to copper. It hangs on a simple pavé diamond clasp without any visible metal to detract from the gem’s captivating color scheme. An engaging pair of earrings features rutilated quartz drops framed with tiny black diamonds to highlight the natural golden inclusions within the stone.

Like his stones, Getz’s jewelry is striking in color, scale, and style. Each piece is designed to enhance the color and distinctiveness of the gemstone. “My designs appeal to a sophisticated clientele who are not interested in brand names but want to express themselves in a unique way.” The Getzes cater to this desire for individuality by working closely with clients to select singular pieces that best suit them.

“People have a strong emotional connection and fascination with gemstones and jewelry,” says Getz, who has been selling since he was 11 years old and still relishes the celebratory aspect of a jewelry purchase. “In my business, I have more opportunities to share joy with people than the clergy does.”