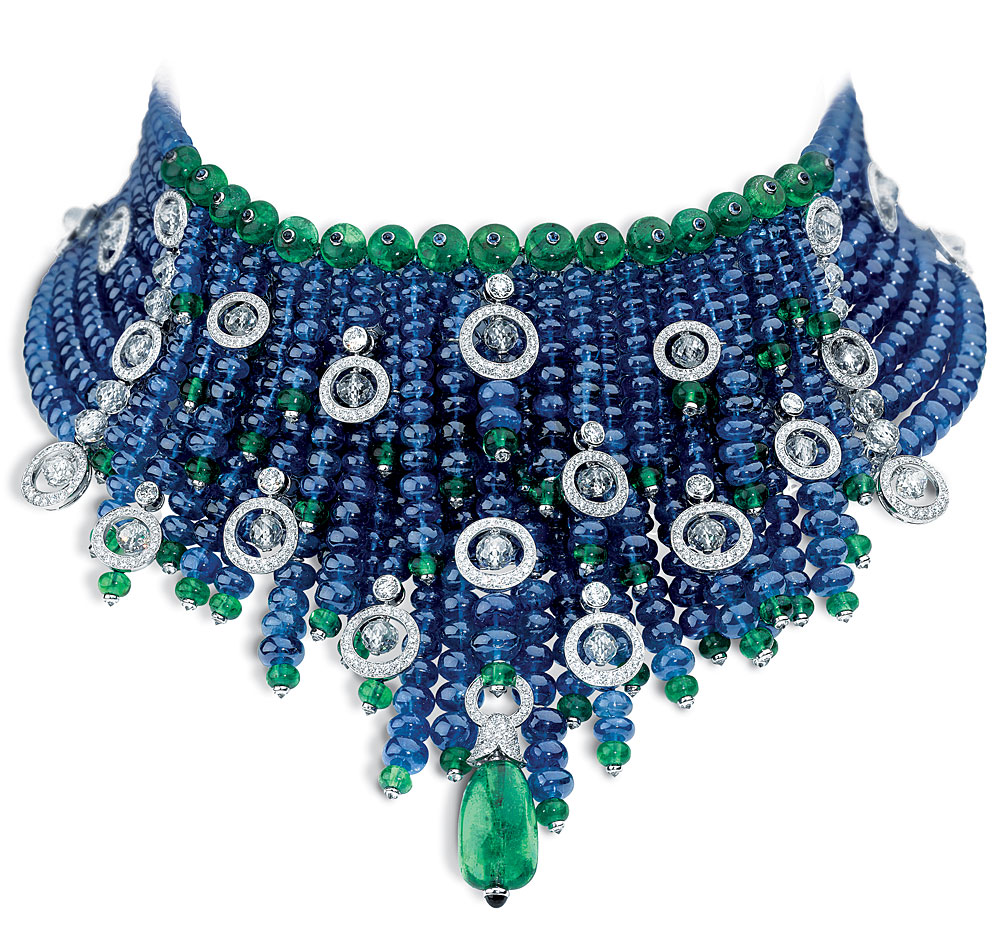 Jacques Cartier, the grandson of the Paris jewelry house’s founder, Louis-François Cartier, returned from his first journey to India, in 1911, with a cache of colorful gemstones and some new ideas about jewelry design. Indeed, the Indian aesthetic—which Jacques interpreted with cabochon gems and stones carved in the shapes of fruits, leaves, and flowers—influenced Cartier’s designs throughout the Art Deco period. Furthermore, India’s maharajas, with their coffers of gems and gold, provided spectacular commissions for Cartier during the first half of the 20th century.

After India became independent from Great Britain in 1947, the country’s princes lost much of their wealth, and consequently, their influence on Cartier’s designs faded. Now, as India emerges as an economic power, Cartier has introduced its new Mysterious India high-jewelry collection, which references the company’s earlier link to the country. The collection debuted in the United States at Art Basel Miami Beach in December with 34 unique pieces. Cartier will expand the collection with additional designs this year.

The pieces’ allusions to India are subtle. Consider the gemstones that drape from an earring like a sari, the jeweled bracelets and earrings that bear colorful paisley motifs, and a gold collar that is made in the form of a Bengal tiger.

Although many of the designs include large sums of stones, the jewelry looks—and feels—light, says Pierre Rainero, who holds the title of image, style, and heritage director for Cartier. “There is fluidness to the jewelry that makes it more fitting for the way women dress and live today,” says Rainero. “It’s not rigid or formal. The new jewelry corresponds to the evolution of how women want to express themselves today, which is more serene and subtle.”

Some of the collection’s pieces display updated versions of the Tutti Frutti motif, which was one of Cartier’s most famous and coveted Art Deco designs. Vintage Tutti Frutti pieces now fetch top dollar at auctions. According to Rainero, in the 1920s, the maharaja of Patiala presented Cartier with trunks of carved sapphires, emeralds, and rubies, and challenged the house to create an extraordinary piece of jewelry. Cartier shocked the jewelry establishment by combining a variety of the stones in a necklace that became known as Tutti Frutti because of its bright colors. The vibrant combinations spurred a design trend, and luminaries of the day, including Cole Porter and Daisy Fellowes, placed commissions with Cartier for similarly styled pieces.

The centerpiece of the Mysterious India collection is a new Tutti Frutti necklace made with diamonds and more than 800 carats of carved and cabochon emeralds, sapphires, and rubies. Cartier says that jewelers spent more than 2,500 hours crafting the piece in the space above its flagship rue de la Paix store, in the company workshop, where most of the original Indian-style jewelry was produced nearly 100 years ago.