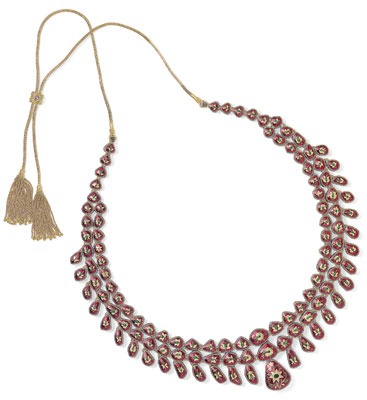 Since 1852, India’s Kasliwal family has adorned maharajas as well as European and Middle Eastern royalty with opulent jewels crafted at its Gem Palace of Jaipur. In November, the family-owned company added a new chapter to its storied history by opening a salon in a brownstone on Manhattan’s Upper East Side. Although the jewelry house recently has sold pieces through Barneys New York, Aspen’s Caribou Jewels, and New York’s Metropolitan Museum of Art, the by-appointment-only showroom is its first outside of India.

As Gem Palace raises its profile in America, Munnu Kasliwal, a 48-year-old, fourth-generation jeweler, is designing pieces that appear more modern and streamlined than those from the house’s previous collections. Kasliwal’s contemporary designs particularly reflect his preference for colored gemstones. “A D-flawless diamond can be quite boring and mechanical,” he explains. “Every stone has a unique character, something that excites you, whether it’s the shape, color, luster, or inclusions. I select stones for their individuality, not for their perfection.” Kasliwal appoints his 116-carat Burmese ruby vine necklace with large, nugget-shaped rubies that appear like tumbled rocks suspended from a diamond-studded vine. A floral-themed ring features a 12.5-carat diamond surrounded by layers of thinly sliced milky diamond petals. Despite its hefty 42 carats of diamonds, the design is surprisingly understated.

As one of India’s largest gem dealers, Gem Palace has access to some of the world’s most significant stones. Its bustling, multisite headquarters in Jaipur employ more than 3,000 craftsmen, who cut and polish gems and create the extremely intricate jewelry. The floors and tabletops of their work areas hold mounds of rubies, emeralds, sapphires, and diamonds. When asked if he fears that these jewels might attract thieves, Kasliwal replies, “One wears jewelry to bring happiness; stolen gems can never bring happiness.”

When they were in power, the country’s flamboyant maharajas often commissioned Gem Palace to create custom jewelry and objets d’art such as a life-size enameled gold parrot set with rubies and diamonds, and a 32-piece gold and diamond chess set. In 1947, when India became independent and the maharajas needed to raise cash to pay new taxes, Gem Palace reacquired many of its most valuable creations. Within the next few years, it plans to open a museum to showcase its extraordinary cache of antique and modern Indian masterpieces. “Jewelry survives much beyond us,” says Kasliwal. “It is something that stays for a long, long time, and therefore, it has to be perfect.”

For Kasliwal, perfection is achieved by lavishing as much attention on the back of a design as he does on the front. “Jewelry should be beautiful from every angle because it is not only what others see but also what the body feels,” he explains. “Jewelry should enhance the person, but, at the same time, stand alone as an object of pure beauty when a woman takes it off.”