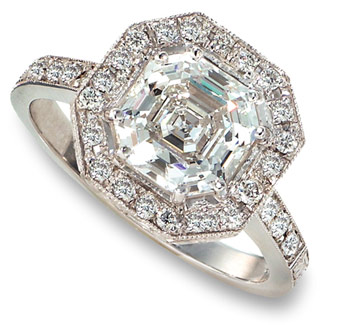 In February 1908, before an anxious audience in his Amsterdam workshop, Joseph Asscher raised his knife to cleave the world’s largest diamond, the 3,106-carat Cullinan. Upon impact, the blade broke in two and the Belgian cutter nearly fell to the floor—yet the stone remained intact. For his second attempt, Asscher cleared the room except for the notary and dealt the decisive blow that broke the stone. The two biggest pieces of the diamond were used in the British Crown Jewels, which are on display at the Tower of London. Cullinan I, a 530.2-carat pear-shaped stone, was mounted in the Imperial Scepter; and Cullinan II, a 317.4-carat cushion cut, was set in the Imperial State Crown.

Asscher had gained some notoriety six years earlier when he created the patented Asscher cut for diamonds. Now, his great-grandchildren Joop and Edward Asscher have resurrected the distinctive cut, which is considered a precursor to the emerald cut. The Asscher cut features fewer facets than a traditional brilliant-cut diamond, and the linear pattern of the facets creates an understated, yet radiant, elegance.

Asscher-cut diamonds gained prominence in the angular Art Deco jewelry styles of the 1920s. However, the once illustrious Royal Asscher Diamond Co., established in 1854 in Amsterdam, stopped producing the Asscher cut in the late 1930s following the Depression, and closed its workshop at the onset of World War II. Only 15 employees out of 500 survived the war, though the family was determined to rebuild the company, which reopened in 1945.

While production of Asscher-cut diamonds ceased for decades, the classic cuts have remained highly sought after in estate and antique jewelry circles. “Asscher-cut diamonds have always been in demand,” says Russell Zelenetz, an owner of the Madison Avenue estate jeweler Stephen Russell. “We have been selling original antique Asschers for 20 years.” Still, he says, the older Asscher-cut diamonds are suddenly a hot trend among a younger clientele who want something unique. “People are attracted to older cuts like the Asscher for their warmth, character, and individuality.” Among his prize pieces is a 6-carat, nearly flawless Asscher diamond Art Deco ring designed by famed American jeweler Raymond Yard. The ring is priced at $325,000.

Once the Asscher family learned that the house’s antique diamonds were commanding top dollar in America, they spent two years perfecting the original Asscher cut to reveal a more intense brilliance while maintaining the sophisticated and subtle warmth of the original cut. Sixteen facets were added to enhance the stone’s reflection of light.

To promote the updated Royal Asscher cut, they joined forces with New York’s M. Fabrikant & Sons, another famous family-owned diamond dealer. “We recognized the demand for older cuts and at the same time the diamond industry’s movement toward branded stones,” says fourth-generation Fabrikant Sue Fortgang. Her family approached the Asschers and received the exclusive right to market and distribute the Royal Asscher cut to jewelers in North America.

Fortgang points out that over the years, many jewelers have misrepresented vintage and even new diamonds as genuine Asscher cuts. Therefore, to ensure authenticity, the new diamonds are laser-inscribed with a logo and an individual number that corresponds to a certificate of origin.

“People are simply drawn to the Asscher,” says Fortgang, “even those who don’t know the romantic history behind this great diamond and the house that created it.”